Ed Sheeran's Perfect is the Christmas No.1 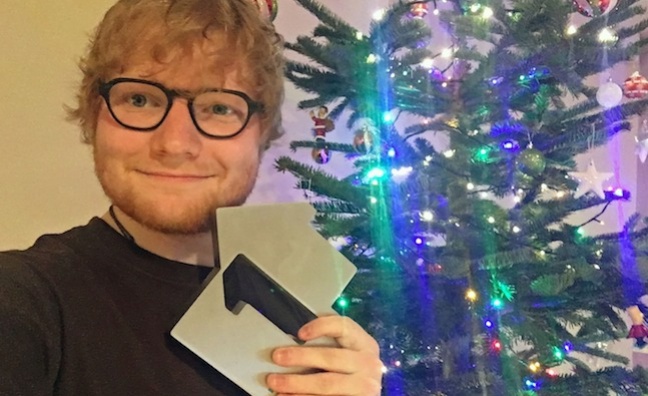 In a race for the Christmas No.1 that was briefly enlivened by a battle with himself for the honours, Ed Sheeran has rounded off an incredible year by holding on to the top spot with Perfect.

Music Week’s Artist Of The Year was named the official Christmas No.1 with sales of 85,000 for Perfect – 45,000 of those from downloads and the remainder based on six million streams.

It is the third week at No.1 for the single, which already made No.4 back in March as one of a raft of tracks to chart from ÷, leading to a change in the chart rules. In December, Sheeran’s push for the top spot was bolstered by new versions of the track featuring Beyoncé and Andrea Bocelli.

In a video message, Sheeran said: “Thank you very much for making Perfect Christmas No.1. This is an actual dream come true and I’m very proud and happy. Thank you so much and have a very Merry Christmas, happy holidays and a Happy New Year.”

Perfect has been certified double platinum by the BPI, achieving 1.23m combined UK sales and streams to date.

It managed to see off the streaming challenge from festive perennials by Mariah Carey (All I Want For Christmas Is You is at No.4 on sales of 35,414) and Wham!, whose Last Christmas finishes at No.3 on sales of 62,481. A campaign for Last Christmas had attempted to secure a posthumous No.1 for George Michael a year after his sudden death.

Big Shaq’s Man’s Not Hot managed to boost sales and its chart position, moving 8-6, in a big chart week. But Sheeran’s biggest challenger remained himself (as a featured artist) and Eminem on the track River, which finished at No. 2 on sales of 67,263.

Sixteen festive tracks make the top 40 including The Pogues’ Fairytale Of New York feat. Kirsty MacColl at No.7, Band Aid’s Do They Know It’s Christmas? at No.12 and Brenda Lee’s Rockin’ Around The Christmas Tree at No.14.

Released late in Q4, Eminem’s ninth LP Revival was a fairly comfortable victor in the albums battle, even though ÷ was starting to catch up and looks well placed for an eventual return to the summit.

Revival is Eminem’s eighth consecutive UK No.1 album, which ties a record held by ABBA and Led Zeppelin. It also provides Eminem with several singles chart entries, including In Your Head at No.19

The rest of the albums chart Top 10 includes big Q4 releases including Sam Smith’s The Thrill Of It All (No.3), Pink’s Beautiful Trauma (No.4) and Michael Ball and Alfie Boe’s Together Again (No.6). Rag’N’Bone Man's Human, by far the year’s biggest debut, is at No.5.

George Michael's Twenty Five moves up four places to No.11 as the first anniversary of his death approaches.