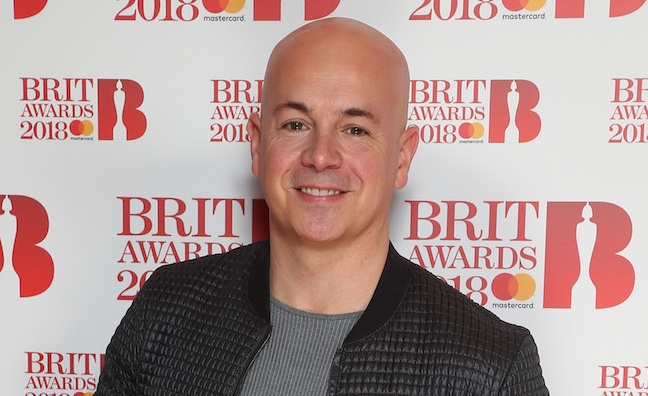 The BRITs has honoured Steve Mac with this year’s British Producer award, in recognition of his 2017 production credits including Top 10 singles by Pink, Rita Ora and Liam Payne, as well as co-writing and producing Ed Sheeran’s Shape Of You, which became the most streamed track of all time and the highest-selling UK single of last year.

During a 27-year career, he has produced records with worldwide sales of over 200 million, including hits for One Direction, Little Mix and Clean Bandit. Here, he tells Music Week about Ed Sheeran’s prolific writing session, helping out Chvrches on their big comeback and the state of British pop…

How does it feel to get recognition from the BRITs?

Last year was just extraordinary for me. It’s my 27th year of making records; I have good years, I have bad years, and so I know what’s a good year. And last year was an extraordinary year, where all the stars just seemed to line up, whether it was the writing sessions, the songs and then the releases as well. I woke up on 2018, the first day, and thought, ‘I might as well not get up because I’m not sure this year’s going to be quite as good’. But then you start with a BRIT and it’s quite extraordinary.

You produced and co-wrote Shape Of You – how was it working with Ed Sheeran?

Well, you know what, he’s the first artist that I’ve worked with where I was a massive fan before I got the chance [to co-write]. I’d never really had the chance to work with big artists. Most of the artists that I’ve had hits with have been from nothing – they’re artists that have started off. So to me, a marquee artist like Ed, whose work I admired, I was very nervous about it but it was also a great opportunity for me. His work ethic is extraordinary, he never stops, he always wants to win. And you combine that with the talent that he’s got, I just don’t think he can fail. It was extraordinary, when you’re writing with Ed, it’s three songs a day. Some of them never see the light of day, but the ones that do seem to go on and do okay, and that was one of them.

Shape Of You is nominated for a British Single BRIT, along with Liam Payne’s Strip That Down. How do you think he can do as an album artist?

What do you think of Dua Lipa’s breakthrough success at the BRITs?

I’m a big fan of Dua, I remember three or four years ago she came in the studio and they put her in a session with me, nothing really came of it. So to see her blossom, I just think it’s a great time for British music at the moment. I think we could do something really cool now. There are so many artists at the moment from Britain that are really flying the flag and it’s encouraging to see, with Sam Smith, Ed and Dua. I’ve been lucky enough this year to work with Chvrches, who I love. I’ve got a Years & Years track, Bastille. It’s just an extraordinary time for me. I never thought I’d be here in my career 27 years on.

Isn’t that a new approach for Chvrches to bring in a producer?

Yeah, they do the core of it themselves – they are so talented and their songwriting is amazing. They were just bringing a couple of different producers in. I think Greg Kirstin’s heavily involved in it; I’m a massive fan of his and he’s the perfect match for them. It’s just to help out from a pop point of view, and maybe try to take it in a slightly different direction but without losing the core audience.

Who else are you working with at the moment?

Years & Years, Bastille, Nick Jonas, and hopefully I’m just about to start working with Katy Perry as well, which will be fantastic. So the opportunities at the moment are incredible, I’m just very excited about pop music.

After the success of your Ed Sheeran co-write on Your Song, will you be involved in Rita Ora’s album?

What I love about what Rita does is that she’s a pop artist, she knows she’s a pop artist, and she’s just going for the throat – ‘give me the best lyric, the biggest song, the most pop’. I’m so chuffed for her, to see where she’s been, to see the success – she’s on fire.