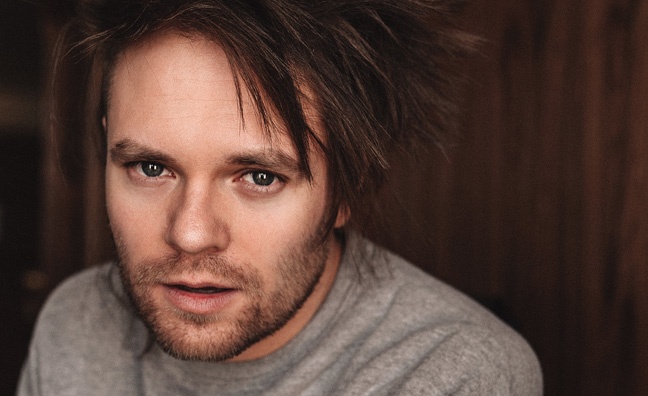 Earlier this month, Enter Shikari frontman Rou Reynolds took on Music Week’s Aftershow feature just ahead of the band releasing their highly-anticipated album Nothing Is True & Everything Is Possible, which is currently at No.2 in the midweeks.

This is but the latest success for the genre-bending St Albans band who, as far back as 2007, were making waves when their independent debut Take To The Skies hit the Top 5.

In his Aftershow interview, Reynolds explains the importance of staying independent, why their new album is the “definitive” Shikari album, how the band have fought to distinguish themselves from other groups, oh, and the time he met Noel Gallagher while wearing nothing more than a towel…

Here, in an unread extract of our interview, Reynolds delves deeper into the making of their new album…

How are you keeping during lockdown?
“I’m very, very lucky. I have my health, all my loved ones have their health. It’s all you can ask for at the moment. Oddly, a lot’s changed and not a lot’s changed, really. Because we have the new album, I have lots of promo and interviews and also a lot of live streams and other bits and pieces. Basically, I’m just trying to find any other way to promote the album seeing as all the release shows have been cancelled. Things are still really busy, I haven't had the opportunity to get bored yet.”

A lot of artists have pushed their new albums back but you stuck to your planned release date. How big a decision was that to make?
“It was difficult, especially as the whole of April was supposed to be our intimate release shows not just in the UK, but in Germany, France, America and Russia. So it was going to be quite a busy month of shows and promo, so having all that cancelled just… It did almost persuade us to postpone the album release because effectively our whole promotion plan has been scrapped. But if the output of art in general dries up, I don't think that's a particularly helpful thing. With music and art, I usually use the metaphor that, if life is this crazy building site, art is like the hardhat you wear. It's a little bit of reassurance, a bit of safety that keeps you sane to some degree. Even though the album is probably not going to have anywhere near the reach that it would have, I think it's important just for our fan base. I'm looking forward to lots of releases from my favourite artists and there are people who are looking forward to ours. I just think it would be a bit of a dereliction of duty if we didn’t keep to [the plan].”

Nothing Is True & Everything Is Possible is certainly your most musically diverse album to date. A lot of songwriters in the pages of Music Week have recently been celebrating that we live in a post-genre world nowadays - where do you stand on that? Is the concept of ‘genre’ dead these days?
“For me, it sort of always has been. Well, it has and it hasn't. I grew up among so many different genres and so many different influences, and I could see the divisions, but I didn't like it. So, I think there's definitely been improvement – people don't base their whole lives, their whole character, their whole personality and their dress sense around one specific, thin portion of the musical spectrum anymore, that doesn't happen I don't think. At least not to that degree it did when I was at school. It's got much better. Genre’s not dead because there's still the history, there's still how we got here. But I think we were quite lucky to never really notice genre, we just saw all these separate influences. I usually use the metaphor of desserts: I probably could have a chocolate cake every day, but sometimes I want a lemon meringue or a fucking scone. We never really got that whole ‘genre’ thing.”

So where does rock music exist in a post-genre world, in your opinion?
“It depends what the definition of rock is, because it's still alive as an attribute within the whole of an artist – rock is still alive as a portion of us, but we were never a rock band; [to look at it that way] that would be massively reductive. I think all the genres are still alive, they’re just now pieces of a bigger whole rather wholes themselves.”

Your new classical music song Elegy For Extinction is one of the most striking songs of your career. What did you learn from the process of working with the City Of Prague Symphony Orchestra and composer George Fenton on it?
“Oh God, so much. Obviously, standing on a podium in front of 60 amazing classically trained musicians, I felt very out of my depth! So, the learning curve in that respect was very quick. I learned a great deal, especially thanks to George Fenton. I don't think we could have done it without him, it would have been a much lesser thing if we hadn't got him involved. He was absolutely incredible. And he's one of my favourite modern composers – his CV is incredible. He came to our show and was really intrigued by how we combine different styles of music and that blew me away, like, ‘He gets it, this is amazing!’”

On Crossing The Rubicon, you’ve turned the Samuel Beckett quote ‘Try again, fail again, fail better’ into an ear-worm. How did that come about?
“It was almost accidental, really. I studied some of his plays at school, but if you look at my bookshelf it wouldn't be full of Beckett, because he’s quite a hard nut to crack really – there's a pessimism that runs through all of this stuff. I think you have to be <really> into literature to be able to delve deep into Beckett. So, the way I got into it was basically through the quote that I use. As with any sort of millennial, I saw that quote in italics over the top of some sort of faux-motivational image. Those things usually make me cringe, but it’s such a beautiful quote, I love the thought of failure just becoming slightly better and success is just a slight improvement on the failure that you had before.”

And now it’s a banging pre-chorus!
“The really interesting thing about that quote from Worstward Ho is the whole thing is very pessimistic. Beckett was interested in failure as a concept, he wasn't interested in it being this motivational thing, but this quote got lifted out of context and it's now become, for people that don't know the original, this amazing motivational phrase. That's how I discovered it and that's what I thought of it, but then looking deeper into it, it then brought up all these questions of like, ‘Is it ever OK to take art out of context and make it get something different across?’ I think this quote has helped a lot of people. Is there a problem in that? It brought up all these other moral issues which then permeate the song.”

You produced the album yourself – how have you grown into that role?
“I am definitely not the person who could list you all these amazing producers that I’m influenced by. Well, honestly, I'm not really influenced by any sort of ‘named’ producers. For me, my production techniques and learning mostly came from drum’n’bass. We've always had our little side-projects – I've had all sorts of stuff for several years – and done production outside of Shikari’s world. So for me, that's where I learned everything. A lot of the time you don't really have a chance to get the confidence to say, ‘I'm going to produce!’ until you've had the validation of producing something. So it's like a Catch 22. I co-produced the last few albums and learned so much and that built up my confidence and, this time, I think the amount of detail that was on this album – it’s fucking forensic at points! – just needed me to be at the chair and give the sheer amount of hours it really needed. It was basically an amount of time and effort that I wouldn't feel comfortable asking from anyone else [laughs]!”

What tip would you give to an artist looking to produce their own work?
“I think the main thing for me is to be led by your ideas, and not always think ‘Does this sound good? Am I using enough cool plugins?’ Usually the best-produced stuff is the people who are going on a vibe rather than show how much about production they know. Obviously, every now and then there are going to be stars in production that show that they really put the time in, know what they're doing and have the best equipment, but a lot of the time it's all about the ideas. I think that's why I'm happy that I was a songwriter first, because the song always comes first and the production is just there enhance and give clarity to the ideas and make sure they have the space.”

Is there anything specifically the music business needs to remember more often as it pertains to dealing with artists?
“I think there has to be more of a weight put behind trusting artists, even if they're just perceived to be within a niche area, and trusting that it's worthwhile. Without getting all whingy, it’s just the fault of capitalism really, it’s so important to keep the niche areas, the underground areas vibrant. It's those areas that the mainstream people steal from anyway and water down. So this is a point about the importance of independence, I suppose; those who are going to put their trust and their money into more interesting styles of music is so important for the general health of music as a whole. I did a lot of pop writing last year. I did some songwriting camps, basically, and that's one thing that really took me back, the amount of referencing – you walk into a room and it’s, ‘OK, we want a beat like this, a melody like this.’ And they'll literally have references for what they want. It’s always songs that came out last month and it’s like, ‘Oh my god, where's the soul?’”

So did you not enjoy the songwriting camp experience?
“I learned a lot but I can't say I enjoyed it. It seems very unnatural to me anyway, because I'm very much your typical introvert, it takes me a while to get used to new people and feel comfortable in their presence. There were songs that I thought were alright, but I had no drive for them. For me, if I wake up and have an idea, I won't eat until that idea is done – at 5pm or something, it’s like that the whole world disappears. And that's a wonderful state to be in, but I never get that from songwriting camp, it becomes very much this little conveyor belt job. There are some moments I enjoyed, but they're more like moments where I felt like I connected with a new human, which is always just a lovely moment anyway, it wasn’t really down to the music we're making.”

Would you do it again?
“I'm not sure. I think I'd prefer to work with specific artists, to develop together rather than like, ‘OK, you're in this room, write a song for this person!’ I don't understand that fully.”

Enter Shikari’s new album Nothing Is True & Everything Is Possible is out now. Subscribers can read Rou Reynolds’ Aftershow interview here.