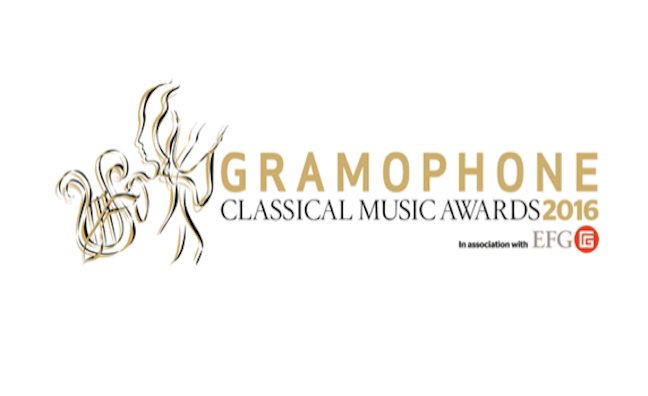 Gramophone’s list of award winners for its 2016 Classical Music Awards has been unveiled.

The awards are split between 12 main recording categories, voted for by a panel of critics. They are to be presented on Thursday, September 15 at London’s St John’s, Smith Square and will be streamed live by Medici.TV.

One of the winning recordings will go on to claim the Gramophone Recording of the Year.

“The 2016 vintage has provided some of the most enjoyable hours of listening I can recall in years,” said James Jolly, editor-in-chief of Gramophone. “And among the winners, it’s very heartening to see so many young artists – Igor Levit, Vilde Frang, Andris Nelsons and the Heath Quartet, still with years of music-making ahead of them, but already with so much to say and with such originality in the saying”.

The Gürzenich-Orchester Köln, a host of European choruses and a team of soloists, conducted by Markus Stenz, take the Choral award for their recording of Schoenberg’s Gurrelieder.

Barbara Hannigan with the Bavarian Radio Symphony Orchestra conducted by Andris Nelsons wins the Contemporary category for Hans Abrahamsen’s Let Me Tell You, a work based on Shakespeare’s Ophelia to a libretto by Paul Griffiths.

The Early Music category winner is Andrew Parrott and his Taverner Choir & Players, for their recording of their namesake’s Western Wind alongside contemporaneous court music and songs written for Henry VIII.

Véronique Gens wins the Solo Vocal category with pianist Susan Manoff in her recordings of late 19th-century mélodies by Chausson, Duparc and Hahn in her album ‘Néère’.

Pianist Igor Levit claims the Instrumental prize (sponsored by EFG International) for his recording of ‘Variations’ by JS Bach, Beethoven and Rzewski.

The Opera award (sponsored by Mrs Joan Jones) goes to Sir Antonio Pappano and the Chorus and Orchestra of the Accademia Nazionale di Santa Cecilia for Verdi’s Aida. Anja Harteros and Jonas Kaufmann head the cast.

Sabine Devieilhe will collect the Recital award for 'Mozart & the Weber Sisters', a collection of songs and arias by Mozart written for the three Weber sisters, one of whom he married. Devieilhe’s husband Raphaël Pichon conducts the album.

Andris Nelsons, winning his second award of the evening, tops the Orchestral category with his recording of Shostakovich’s Symphony No 10, his first live recording for Deutsche Grammophon as music director of the Boston Symphony Orchestra.