'He and his incredible creativity will be missed': Sir Lucian Grainge pays tribute to Avicii 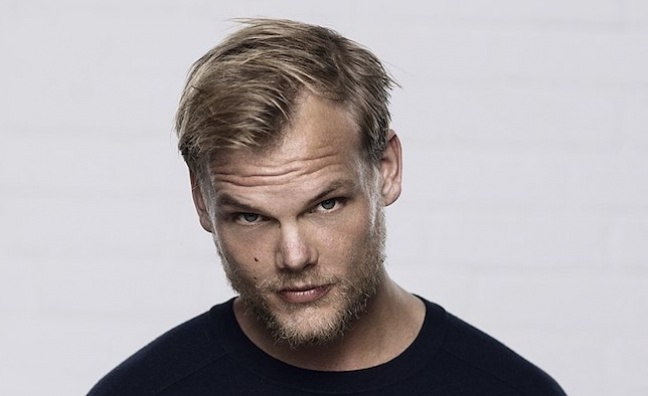 Sir Lucian Grainge has joined a host of music industry figures in paying tribute to Avicii following the Superstar DJ's sudden death at the age of 28.

Avicii, whose real name was Tim Bergling, was found dead in Muscat, Oman, on Friday. His cause of death has not yet been released but authorities have confirmed there were no suspicious circumstances.

“Our entire company mourns Tim's passing and extends our deepest condolences to his family and loved ones - and to his many fans spanning the globe, said Sir Lucian, Universal Music Group's chairman and CEO. "He has left us far too young. He and his incredible creativity will be missed."

Signed to Universal Music Group's Positiva label, Avicii made No.1 in 2013 with Wake Me Up and went Top 5 with Rita Ora on Lonely Together last year. He also made the Top 10 with 2014 Coldplay collaboration A Sky Full Of Stars.

The Swedish DJ topped the bill at Scotland's T In The Park in 2015 and the UK edition of Electric Daisy Carnival in Milton Keynes the following year, but retired from live performance in 2016 for health reasons. He appeared at that year's Creamfields in one of his final shows.

His best-selling album in the UK was 2013's platinum-selling True, which peaked at No.2 and has sold 394,362 copies to date according the Official Charts Company.

In a statement, Berglin's publisher, Sony/ATV said: “We are mourning the incredibly sad loss of an exceptionally creative talent who we have been honoured and proud to represent as one of our songwriters for a number of years. Our thoughts are with his family at this time.”

Devastating news about Avicii, a beautiful soul, passionate and extremely talented with so much more to do. My heart goes out to his family. God bless you Tim x

Such sad news to hear about Avicii passing. Too young and way too soon. My condolences go out to his family, friends and fans x

No words can describe the sadness I’m feeling right now, hearing about Avicii passing away....????
Thoughts go out to his family and friends...

Oh my god truly devastated for Avicii very very sad news way to young ... what a talent he was. rest in peace x

Rest easy Avicii, you inspired so many of us. Wish I could have said that to you in person x

I have no words. I remember how amazing it was to make Lonely Together and it felt like just yesterday we were talking. Condolences to Avicii's family, friends, and the fans who supported him. May he rest in peace. Gone too soon. I’m devastated. Heartbroken.

Sad to hear of @Avicii passing. From humble beginnings went onto conquer the world was a major influence in opening up mainstream USA to electronic dance music. For him it was always about the music not the circus . May his spirit and soul find peace. Way too young x

We are deeply saddened to hear of the loss of Avicii. Yes, a great DJ, but ultimately an incredible music maker who has soundtracked the lives of millions of people all over the World.
Tim, you will be very sorely missed by all of us at VirginEMI ???????????? pic.twitter.com/UJBINojRqF

Totally lost for words about @Avicii have fun memories of being in Ibiza together with you with @Tiesto years ago... Such a tragic loss RIP