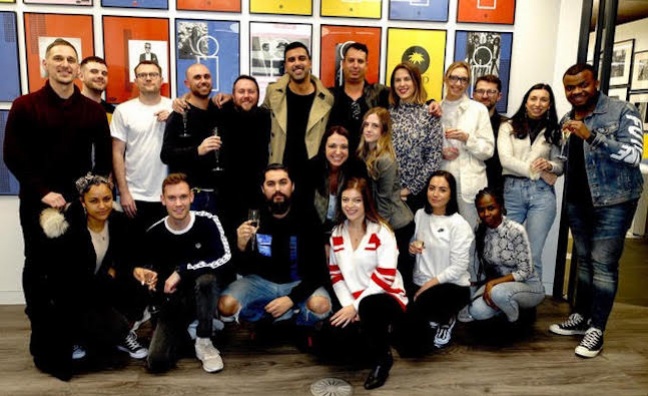 Weiss, whose full name is Richard Dinsdale, first made an impact with his 2013 track My Sister, which reached No.1 on Beatport and led to attention from tastemakers and fellow DJs including Annie Mac, Groove Armada and Kenny Dope. In 2016, he was named DJ Mag’s Best Newcomer.

The 2018 single Feel My Needs racked up more than one million streams and led to Island signing Weiss (pictured fifth from left in the back row). The track made Radio 1’s A-list, as well as receiving support from Weiss’ dance music peers Gorgon City, Eats Everything, Jax Jones, Duke Dumont, MK and Claude Vonstroke.

“We are all excited at welcoming Weiss to the Island family, Callum Ross [Island A&R] and Rich [Weiss] have cultivated a strong bond over the last six months – Callum’s drive, vision and ambition for Weiss has been infectious,” said Daniel Lloyd Jones, co-head of A&R at Island. “As a team we cannot wait to get going, he’s a special talent and working with Serkan [Djemal, manager] is an added bonus, his work ethic is second to none.”

Djemal, manager at Machine 10/Vibrant, said: “Richard’s just had the most prolific 12 months of his life and written a back catalogue of anthems gearing towards this next chapter. We took him on in March 2018 and the target was always Island. Now we find ourselves with the next two years of music written, signing with a super-switched-on and motivated team with some superstars and long-time music industry legends in the mix and an artist who is making so much quality music and constantly raising the bar by his own exceptional standards. It’s a magical time and we are so excited to be making this impact together.”

Weiss' first single with Island is scheduled for release in May.