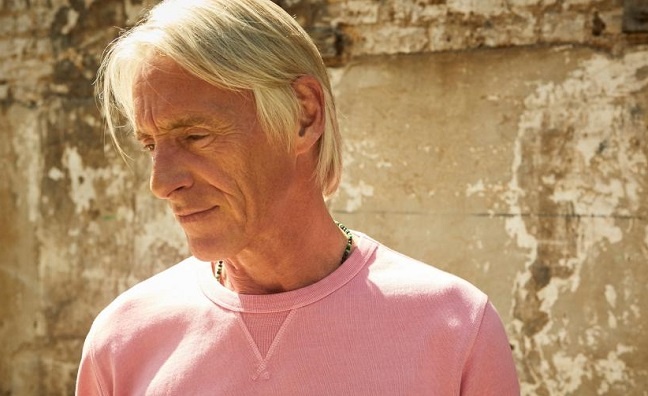 Paul Weller’s performance alongside a full orchestra at the Royal Festival Hall this week (October 11-12) is set to be filmed and recorded for future release, his label has revealed.

True Meanings, his 14th solo album, peaked at No.2 last month. While it missed out on the top spot to Eminem, Weller increased first-week sales compared to his previous album, A Kind Revolution.

Parlophone’s director of marketing, strategy & partnerships, Jack Melhuish, noted the widespread acclaim for the album, released as the Modfather turns 60.

“He’s released songs and records before that have had elements of folk within them or an acoustic sensibility, but this is really the first full body of work, the first album where he’s delved into that space,” said Melhuish. “There are orchestral elements and flourishes on the record. It’s not a full orchestral record but there are some really nice string touches and other elements that have swelled the production of the record.”

As well as recording a Radio 2 gig for BBC TV broadcast next month, Weller is performing an orchestral show at the Royal Festival Hall (October 11-12). Album collaborator Lucy Rose is support for the Southbank shows.

“We’ve already sold out two shows with a full orchestra at the Royal Festival Hall,” said Melhuish. “That’s going to be filmed and recorded, and we’re in conversations about a potential refresh or collected format using those elements. Nothing is confirmed but it’s likely we’ll find a way to release it just because the content will be so incredible, the quality will be fantastic.

“He wanted to find a forum where he could really showcase this record and those elements in the best way possible. He doesn’t want to do things by halves, so a Royal Festival Hall performance with an orchestra feels like the right way to do that.”

True Meanings remains just outside the Top 20 after four weeks on the chart, and sales up to October 5 stand at 35,478, according to the Official Charts Company. Melhuish is confident the quality of the album will ensure it continues to attract an audience.

“We want to continue with this project,” he said. “I think live will be essential in that. It’s likely we’ll be doing a refresh or evolution of the album with some of those live [orchestral] recordings. There’s lots of interesting ways that we can keep this record buoyant, and it deserves to be. It’s an incredible piece of work and it’s important that we shout about it and drive as much attention to it as possible.”

Melhuish said he hopes the label will continue its “collaborative and productive relationship” with further Weller albums to come as he hits a creative peak.

“He’s an artist Mitch [Parlophone co-president, Mark Mitchell] and I talk about a great deal, he’s very much in the DNA of Parlophone in terms of being a true British icon,” he said. “He’s an artist that we cherish and have a huge amount of respect for.”

To read the Music Week magazine story on the Weller campaign, subscribers can click here. To subscribe and never miss a big industry story click here.