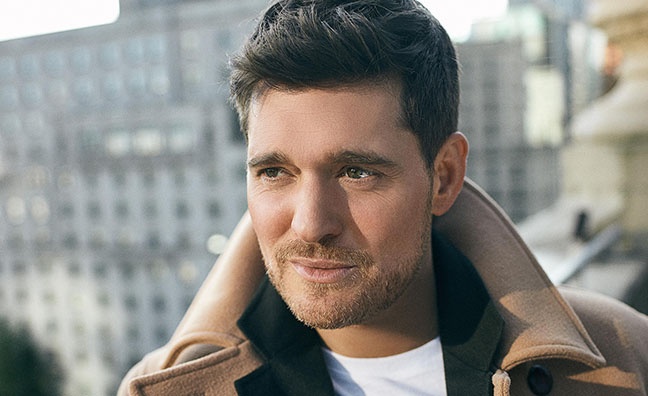 He’s been overtaken by Take That already, but Michael Bublé was briefly able to claim the second biggest week one album sale for an artist in 2018, despite tough competition from Little Mix and Mumford & Sons. Love’s opening sales of 66,794 were also up by 21.25% on 2016 release, Nobody But Me, and the new album is still selling well.

It also marked consecutive No.1 albums for Warner Bros Records UK, following Muse’s Simulation Theory. In the latest issue of Music Week, label president, Phil Christie, speaks about the success of the Canadian crooner’s comeback and the album’s potential as a Valentine’s Day perennial for years to come. Here, he takes Music Week inside the Love campaign…

How did you achieve these stellar week one sales for Michael Bublé?

“I think this campaign contrasts quite massively with the last Bublé album in terms of the way that we’ve been able to animate it with the emotional story of his return. That’s made all the difference. Also, the concept of the album as a collection of love songs has resonated with people. Yes, you are guaranteed a certain amount of interest in a Michael Bublé album, but it doesn’t guarantee you the kind of excitement and electricity we’ve had around this campaign.”

What’s the particular appeal of this album?

“There are two original tracks but actually the story of this album is that it’s a collection of classic love songs, and that is the message that we are trying to get across to people. He is back with David Foster, the arrangements are absolutely impeccable and I think that Michael’s vocal’s never sounded better. His singing voice is absolutely at its peak. The goal for us, in the same way that Christmas is the album that everyone goes to at Christmas, we feel like there’s a real opportunity for this album, Love, to become that go-to concept record for Valentine’s Day and romantic moments throughout the year. It is a really long-term goal for this album - it can run and run.”

There’s been quite a promotional blitz…

"No one sells Michael Bublé like Michael Bublé. He’s been fantastic on the promo trail, this time it’s had that extra poignancy because of what he’s gone through in the last two years [coping with his son’s illness] and that’s really moved people. Carpool Karaoke [for Channel 4’ Stand Up To Cancer] was great to get scale at the start of the campaign and the Graham Norton appearance was just gold, from the chat on the sofa to the performance as well. Last time around, we actually started the campaign in August, which didn’t really feel right. This time, we’ve done some great promo pre-release, big TVs pre-release, he did Chris Evans [Radio 2 Breakfast] on the morning of release as well, which was absolutely fantastic, he performed in the studio. There is a real joy around the music on this album and people are feeling it.”

Does he connect with the kinds of audiences others can’t reach?

“Yeah, Michael’s range is really broad. For his O2 shows, there are whole families coming along. He played [BST] Hyde Park in the summer, which was his first appearance back in the UK for two years, and the audience was eight to 80 - he’s got mass appeal.”

Can the album maintain its momentum during Q4?

“I’m delighted to be at No.1, we had fierce competition and the forecasts weren’t always saying that Michael would be No.1. So I am delighted at the performance of the record. It really punches it into the market in a way that gives us the best opportunity to deliver a great commercial result in the weeks coming into Christmas.”

To read Music Week’s full report on the big Q4 sales week pick up the latest issue - or subscribers can click here. To subscribe and never miss a big industry story click here.