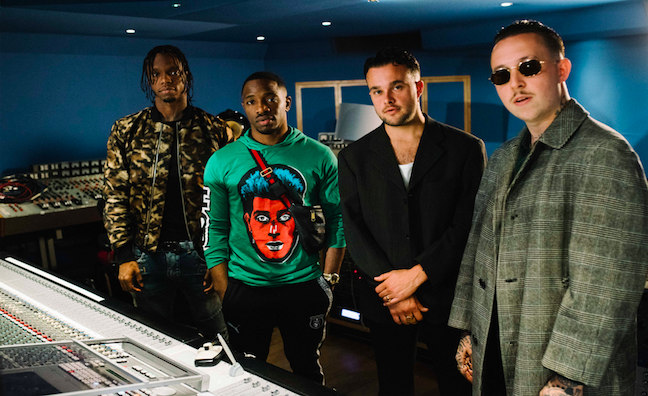 The Masters of Potential partnership connects artists from different genres and musical backgrounds to create one-off pieces which are recorded live to vinyl. The artists are selected by a panel of industry experts, including Alex Boateng, president of Island Records UK urban division, Hattie Collins, music journalist and author of This Is Grime and Abbey Road Studios’ mastering engineer Christian Wright.

Collins said: "Krept & Konan are one of the most exciting acts in the UK right now, they are entrepreneurs, musicians, they’re activists, they’re two exciting and talented young men. Teaming them with Slaves, both at similar stages in their career but in very different genres, smashing that together and seeing what happens is so dynamic and interesting. For a long time, grime and rap wasn’t allowed in institutions like the Barbican or the Southbank, so for Krept & Konan to be in Abbey Road Studios is another symbol of how far things have come.’

Julie Nollet, marketing and communications director, Moet Hennessy UK commented: "We’re so excited to be back working with Abbey Road Studios and exciting young musicians, for the second Masters of Potential programme. Both Krept & Konan and Slaves are such important talents, representing the voices of their generation. Both duos align perfectly with Hennessy and each other, creating an amazing track."

Wright said: "Live to vinyl returns to the very origins of recorded music. In fact, it’s how Abbey Road first started in 1931 with a live performance by an orchestra or performer without multiple takes and mixing. As vinyl continues its massive resurgence in the era of streaming, live to vinyl celebrates the format by capturing a unique and authentic moment for fans to enjoy."

Told You/The Hunter was recorded in Studio Three at Abbey Road Studios, which has previously played host to artists including The Beatles, Liam Gallagher and Frank Ocean.