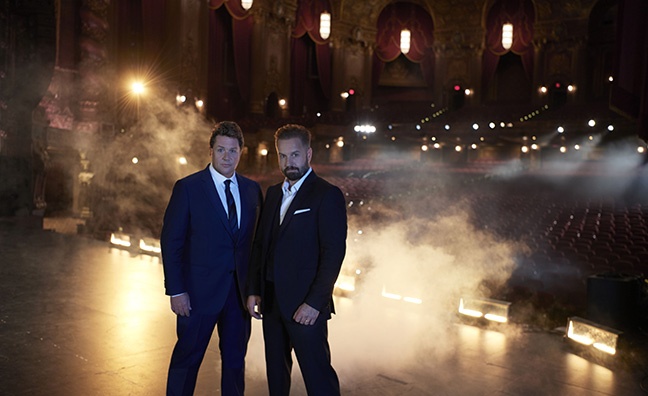 One of 2016’s most surprising success stories, Michael Ball & Alfie Boe’s collaborative record Together looks well in contention to score a Christmas No.1.

And with big things planned beyond the festive period, Decca MD Rebecca Allen and marketing head Sophie Hilton have told Music Week it’s always been about the long game.

Currently sitting at No.2 in the albums chart, Together has proved to be something of an unexpected hit, having so far sold 188,797 copies with sales showing no signs of slowing.

“Decca is known for really committing to artists and albums, and most of our campaigns tend to be 12 to 18 months,” Allen said. “We are very much an albums-led company.

When we signed the Ball and Boe project it was never just going to be about Christmas. It was always about the longer play.”

One of the biggest assets Decca has been able to trade off is Ball and Boe’s growing reputation as an all-round entertainment duo.

“When I met them I realised they are bloody funny together,” Hilton said. “Then, you listen to the album and it’s all about emotion. So we had these two clean angles, which were drama and emotion, and camaraderie and comedy.

It’s like Morecambe and Wise crossed with Dean Martin and Frank Sinatra. They have that likeability factor that connects with the consumer.”

“They have that old school entertainment feel,” added Allen. “People have been describing them as the Morecambe and Wise of the music industry because they are very funny together. And the repertoire is so accessible.

When you see their live shows you’re looking at anyone from about 35-plus. It has that ITV, BBC One entertainment value.”

“About three weeks in advance of the release we had a Strictly performance,” Allen explained. “That was when people saw the enormity of it. We jumped from in the hundreds on Amazon [pre-orders list] to No.3 overnight.”

“We’ve also had these 10-second ‘funnies’ [video clips] that we put together,” said Hilton. “There’s about 28 of them that have been rolled out across social media and broadcast on TV, two per week since September, to engage fans. They basically entail Michael being hilarious!”

With Christmas fast approaching, is Decca planning a full-on assault on the albums chart?

“We have a secret weapon, which is an ITV 1 special – prime time TV, repeated twice in a week (Dec 9 and 11),” Allen said. “We always knew that December would be our strongest month.

And the best is yet to come.”

As for the new year, Allen and Hilton insist there is very little that can be revealed at the moment, but that there is plenty in the pipeline over the coming weeks and months.

“We put ourselves up against Robbie Williams knowing that we wouldn’t get the No.1 spot, but that’s not what we were going for,” said Hilton.

“We weren’t going for the glory of the No. 1 and throwing all our money in the first week. We were always going for longevity.”

“We’ve got a plan to take this right through to Mothers’ Day next year,” concludes Allen. “We always had this plan - it was never about week one. There are very exciting plans for Ball & Boe in 2017. Watch this space.”