Hugh Cornwell talks his solo career, The Stranglers and going back to Sony Music 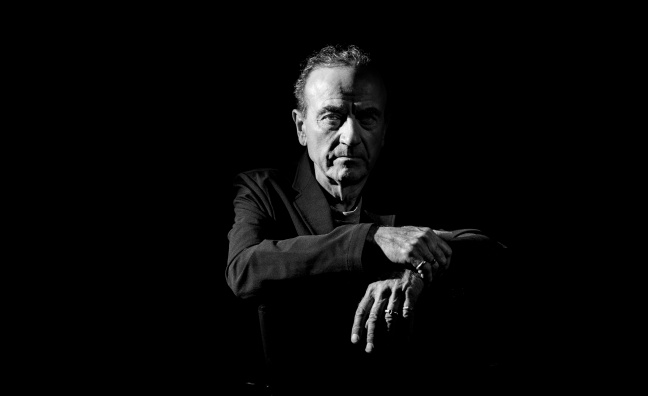 He once sang about having No More Heroes, but former Stranglers frontman Hugh Cornwell gets to write about a few of his own on his new album.

Monster is released today (October 5) and marks Cornwell’s return to Sony Music, where The Stranglers were signed during the second half of his time with the group (he left in 1990).

So Music Week sat down with Cornwell to talk songwriting, Sony and The Stranglers…

How did you choose the people to write about on Monster?

“It all happened really haphazardly. My mother died five years ago and she was a fanatical swimmer in Hampstead Heath pond in London. She would go five times a day throughout the year, not just in the summer. Because she went every day she was acclimatised to the temperature so, when it got colder, it didn’t affect her. She didn’t get hyperthermia because she’d been doing it all year. I wanted to celebrate her in a song, so I wrote one and it turned out really well, and I thought, this is a really nice starting point. The album was going to be called La Grande Dame originally but it got changed for commercial reasons. So I thought maybe there are other people…”

How did the other songs come about?

“I thought, ‘What about [model maker/animator] Ray Harryhausen? Nobody knows about him and he’s a fantastic figure in the movie biz, so influential’. I wrote this song about him and then I’m in Mexico with a mate of mine and sitting next to me is Bobby Slayton the comedian. I tell him about this song and he had tears in my eyes. He said, ‘In my house, I have a room dedicated to Ray Harryhausen’. And then slowly they started popping up. I had an aborted arrangement to meet with Lou Reed, I’d never met him and being one of my heroes I’d have loved to. It was arranged through a mutual friend for us to meet in New York and then we both got ill in the worst blizzard ever to hit New York. It was a couple of years before he died so I missed it. So I thought it’s worth saying something about Lou.”

How is it to be signed to Sony again?

“I’m very pleased about that. I did an album with John Cooper Clarke [2016’s This Time It’s Personal] and all his back catalogue is on Sony. So they wanted the record and were very excited about it. I just played guitar on it and did the arrangements, but they loved it. So we started working with them and I got on really great with them all, so when this record was ready they wanted to hear it. My manager and I said, ‘If someone the size of Sony wants it why would we say no?’”

Do you have fond memories of Sony from your Stranglers days?

“Back then it was Obie [legendary CBS/BPI chairman Maurice Oberstein] in charge, with his two red setters in the office with him! They already had The Clash so, when we signed, they said, ‘Obie wants to say hello’. We all piled into his office and he said, ‘We’re so excited, we’ve already got The Clash guys and now we’ve got The Stranglers, fucking great, we’ve got the two biggest punk bands in the world’. So that was nice. We had good dealings with them. We did four albums [1983’s Feline to 1990’s 10], and we had some hits. We started working with producers, which we hadn’t done before. So, yeah, I’ve got fond memories.”

How does it feel to be back on a major label?

“It’s great. They can get things done and they know what they’re doing. Although it’s corporate, the people that are at Sony at the moment who I’m working with are very indie-minded. I’m on Silvertone, with [Sony CG marketing director] Jon Cauwood and [head of marketing] Joanna Kalli. They’ve got a great team of people and they work their butts off and so do we, so everyone’s working their butt off, which is great!”

Why did you decide to do the second CD of Stranglers songs?

“That was Jon and Jo’s idea. They said, we’ve got your fanbase but it is different to The Stranglers’ old fanbase, so let’s see if we can bring something to the table that they would be interested in. Every two years I do an acoustic tour. They get more and more popular as I do them, and The Stranglers songs that work acoustically aren’t necessarily the ones you’d expect. I love doing it, because I’m always finding new ones that I wasn’t expecting to work. So I handpicked 10 old Stranglers songs that I think work really well and there are some surprises in there. I wanted to create this really dark acoustic album and it worked really well.”

Was it nice to revisit those songs?

“I’ve been out of The Stranglers for longer than I was in them, but most of them are songs I have been playing. But there’s a couple in there that I’d never actually attempted. Don’t Bring Harry works fantastically, it’s got a mandolin on it and I’d never touched that before. It’s nice to go in there and see what comes out. You never know.”

Do The Stranglers get the credit they deserve as a band?

“I’ve no idea. I’ve never really thought about it. It’s a chapter of my life that’s closed. I’m on a new chapter and I’ve been on it for quite a few years. It’s a catalogue that I’m very fond of and it’s really high-quality and it’s lasted the test of time, which is remarkable. That says something for it. A new generation is coming up now of people in their twenties who know all about it through their parents, because their parents played it to death when they were growing up. It’s a great catalogue and I don’t mind playing it, I took part in the writing of all the songs to some degree. For me it’s always a pleasure to play it, but I don’t want to be remembered just for that – which is why I left!”