'I am really proud to get this': Ed Sheeran collects O2 Silver Clef Award 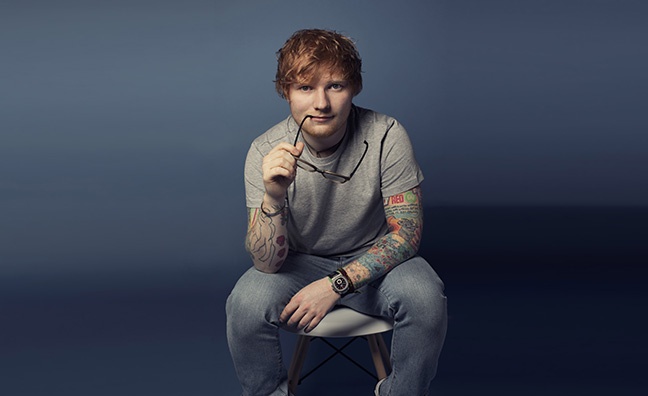 Ed Sheeran broke off from his record-breaking ÷ world tour to pick up the prestigious O2 Silver Clef Award at today's (July 5) ceremony in London.

The pop superstar was presented with the award by magician Dynamo at the annual fundraiser, which took place at Grosvenor House Hotel and raised £835,000 for music therapy charity Nordoff Robbins.

I'm really, really proud to be here and get this. Thank you Nordoff Robbins for all the amazing work you've done

"I don't know what to say what hasn't been said because there's been lots of speeches about how wonderful this charity is," said Sheeran. "I tour around the world and we visit a lot of children's hospitals and children's hospices and there's always music playing in the room and you always speak to the parents of the children [and] they always say what a massive difference it makes.

"I'm really, really proud to be here and get this. You do way more than us musicians do so thank you Nordoff Robbins for all the amazing work you've done."

Sheeran's Collaborations No.6 Project is released this coming Friday (July 12) and the singer returns to the UK in August for outdoor "homecoming" gigs in Ipswich and Leeds.

It was revealed that Sheeran and Sam Smith had agreed to write a song together and that both had donated £50,000 to Nordoff Robbins. A signed Sheeran guitar and handwritten lyrics also sold for £32,000 at auction.

Smith said: "I would like to say to Nordoff Robbins that I think what you do is truly sensational and it takes my breath away. My uncle is 50 years old and he was born with brain damage and he got Parkinson's when he was 16 and I just know that music and film and the arts are such a huge comfort to him."

Best Male @samsmith: “First of all I would like to say to @NordoffRobbins1 that I think what you do is sensational, it takes my breath away” #O2Silverclefs pic.twitter.com/zLz2HIETmQ

Dua Lipa saluted Nordoff Robbins for "changing so many people's lives" and also paid tribute to her team. "Thank you so much for allowing me to have a voice, so I can also help," she added.

Best female @DUALIPA: “I know how lucky I am to be able to do what I do every day” #O2SilverClefs pic.twitter.com/syWgHAWnRb

American Express Icon award winner Gary Numan said: "It's been an education for me for how incredible the work that they do is and I'm embarrassed that I was not more aware of that before. I think it's phenomenal, which makes getting this all the more special for me. I am very, very grateful."

New Order's Bernard Sumner, winner of the Integro Outstanding Contribution award, added: "I am very privileged to get this award for such a noble cause. Music is power and it's therapy and I use it myself when I'm feeling down or troubled or angry. It's great that music can be a healing power."