'I didn't want The Damned to disappear as a nostalgia act': Dave Vanian on the return of the punk legends 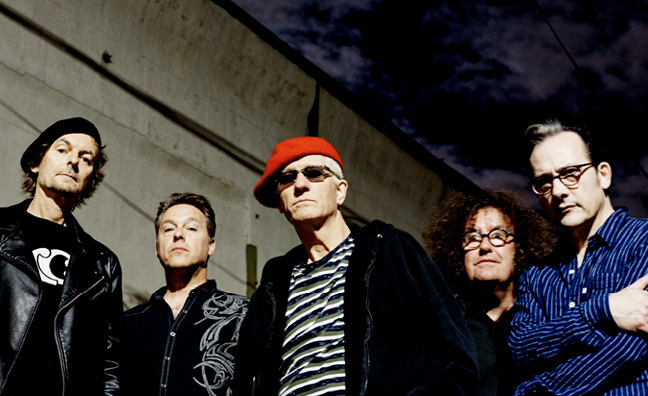 The Damned are on track to score their first ever Top 10 album with comeback Evil Spirits this week. In a 42-year career, they only went close with 1985’s Phantasmagoria, which peaked at No.11. It marks a successful return for the punk legends with top rock manager Craig Jennings’ Search And Destroy label. Here, frontman Dave Vanian (pictured, far right) takes Music Week inside the band’s first album in a decade…

How have The Damned endured for over 40 years?

There’s always a chemistry between the members that have come and gone through the line-ups of the band. If you’re in The Damned, you are a strong individual. I think that’s been our advantage. We’ve always wanted to move on, and try things that maybe stretch yourself musically and maybe experiment a little bit, and not stay in the same type of music for too long.

I think it does help because certainly Captain [Sensible] and myself are very different in many ways. The very fact that we do listen to different music, when you bring that together there’s kind of a strange mix that works. Also, the band’s always quite generous with individual members. It’s not a case of egos, it’s more about the music that we are making. Luckily, I think with this album, we’ve been quite in tune with each other since the beginning.

What did you all think of Captain Sensible’s solo pop career in the ‘80s?

I remember Rat [Scabies, ex-drummer] hated it - he thought it was demeaning and really stupid. I think he was a little jealous as well. I remember Captain was on Top Of The Pops and I sent him a telegram saying good luck with it all. Captain’s a bit of an old lovey - he loves the adoration. He is a crazy character. He may have softened a bit with age, and he’s a bit more sensible for real occasionally, but he’s still a complete nutcase.

The band have been pretty active in the years building up to this album...

We’ve been touring every year basically. We’ve been in a kind of a no-man's land. The gigs are well-attended, there’s a certain type of audience and it was kind of spiralling into a situation where you could go on forever, playing the old songs, living relatively comfortably off of that. But I like to shake things up a bit, get a bit more edgy, take a few risks. I didn’t want The Damned to disappear as a nostalgia act.

And you have things to say on this album…

I think it’s always been in there. We’ve never been the kind of band to stand up there and preach to people, and sometimes even the most lightweight-sounding songs have a message in them if you’re willing to hear it. You can’t not be influenced about what’s happening in the world today. It does come through. I think sometimes ours is a little less in your face, but the message is there, which is great.

How about the new single Look Left, obviously that’s got a particular statement?

Look Left is written by Pinch, the drummer. It’s a great song. It’s an unusual song because, like you said, it’s got a massive political message, but it’s almost like a show tune. That works really well for the subject matter and the type of sound. It’s not at all what you’d expect would come from a drummer.

Well that’s Captain’s forte, he’s amazing at writing really catchy, almost pop tunes. They will have a scathing lyric in there. He’s a master at that, really. I tend to go off on the more esoteric subjects, but on this album I did write a song which I suppose is a political song, Standing On The Edge Of Tomorrow.

I like to shake things up a bit, get a bit more edgy, take a few risks

There are some classic songwriting touches - did producer Tony Visconti tease out that side of the band?

It was really teamwork. Because Tony’s kind of a quiet producer who knows what he wants, he’s not an in-the-face type. He didn’t change an awful lot. We worked very hard on the tracks before we went in. We were very conscious of wanting them to sound perfect. We did put a lot of melody and a lot of backing vocals and an awful lot of hooks in there as well. I think he did a great job. I’m very proud of the way it all turned out.

Were you happy to get him on board to produce the record in Brooklyn?

I didn’t expect him to say yes, I just hoped that he would. We were facing a dilemma of who would produce this album. We saw a couple of people, and then I was listening to Blackstar [by David Bowie], and I loved the sound of the track so much. I realised he [Visconti] would be perfect. We had a meeting and I knew straight away that he would be the right man for the job. He had the right attitude and everything. So many producers we talked to prior to that weren’t interested. I think they were all hedging their bets in case we turned out a pile of rubbish.

How do you feel about the music industry in 2018?

It has a lot of good things going for it, to be honest. Only time will tell where it’s going to head. It’s very difficult for me, because I come from a whole era where it was so set in stone, but the way a musician now can create a piece of music and instantly it’s available anywhere across the world is amazing. That side of it is great. I think that the hard part for musicians now is there’s more music available than any other time. The difficulty is making a living out of it. Also the emphasis has changed a bit and people want more of the personality of the people that make it - the celebrity part of it, more than the actual music.

What are the ambitions for the album?

I just want people to like it. I’m hoping that they’ll see this as an album they must have and want to listen to - that the music touches them somewhere emotionally. It’s got a rich tapestry of things running through it, it’s a nicely textured album. People want instant gratification these days, I don’t know how many people actually sit down and listen to a whole bunch of songs together any more because of the way they access music. But I’m hoping a lot of people will.

Subscribers can read the magazine feature on The Damned here. To subscribe and never miss a music biz story, click here.