"I kept it a secret for 10 years!": Steven Van Zandt on his plans to change education with TeachRock 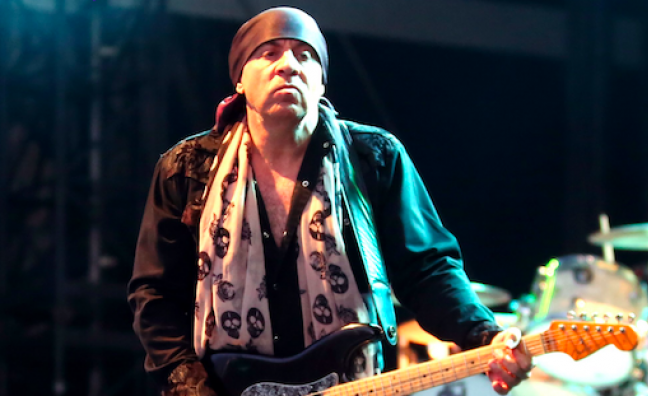 Ahead of playing the Shepherd’s Bush Empire, Van Zandt took time out for an interview for Music Week’s Aftershow feature, reflecting on his life playing with Bruce Springsteen in the E Street Band, running his own label and radio show, overthrowing a government and, of course, starring in The Sopranos. But the star has a lot more to say besides.

Van Zandt’s current tour also benefits The Rock And Roll Forever Foundation's TeachRock programme. Established by Van Zandt, the Foundation creates education materials that use the history of popular music to create multicultural lesson plans for history, social studies, language arts, music, and science classrooms at no cost. At each stop of the tour, The Rock And Roll Forever Foundation is also hosting free TeachRock Professional Development Workshops, with educators who attend receiving a complimentary ticket to that evening’s concert. Here, Van Zandt reveals all…

What was your original goal with the TeachRock campaign?
“Like most things, I didn’t plan it, which seems to be the story of my life (laughs). I’m always working very hard planning things then my entire life comes through the side door or back door! The Music Teachers Of America came to me and said the 'no child left behind' legislation had had the unintended consequence of absolutely destroying all the arts classes in America. They basically cancelled all the arts classes in the high schools. They asked me to go speak to anybody I could in Congress – somebody set-up interviews and I spoke with Ted Kennedy on the left and Mitch McConnell on the right, which is as extreme as you can get on both sides. I explained the situation; they both apologised and I said, ‘OK, fine, just fix it’. They were both like, ‘Not gonna happen’. They were obsessed with testing because America keeps showing up 25th and 26th on the list of kids who understand English, science and maths. They’ve become obsessed with the testing thing, even though, of course: No.1, we all know testing is not learning; and No.2, the fact is statistics show that every kid in music class does better in science and math. Anyway, I said let’s do something different…”

Instead of saying to kids, ‘Take the iPod out of your ears,’ let’s say, ‘What are you listening to? Let’s trace it back and find out where it comes from’

So what was your specific plan?

“To create a music history curriculum that can be used for teachers cross-curriculum – not just music class but history class, English, whatever. And also, it’s kind of a nice idea because it’s not just for musicians. We’re not going to be able to put instruments in kids’ hands at the moment, but we’ll be able to keep their interest in music in general and every kid is into music. It makes our audience broader – you don’t have to worry about a kid being a musician or not. Let’s use music as a way of establishing communication between teachers and students because there’s a problem right now in the entire education system worldwide. What we thought was attention deficit disorder turns out to be not a disorder, it is in fact a paradigm shift to an entirely new mentality to kids who’re just getting all this instant information. I thought to myself, the old rules when we grew up was: ‘Learn this and someday you’re going to use it’ That just doesn’t work anymore, kids want something they can use right now. So let’s get their attention – which is where teaching has to begin – and every kid’s into music, and what’s the one thing that kids are an expert in? Their own taste. Instead of saying, ‘Take the iPod out of your ears,’ let’s say, ‘What are you listening to and let’s trace it back and find out where it comes from’ You immediately have their attention, they’re immediately responding and in the conversation that’s immediately interactive. Everyone’s really being embracing it. I kept it more or less a secret for 10 years, believe it or not.”

That’s a long time, isn't it?
“I know, I know. I’m a bit embarrassed it took that long, but I wanted to get it right! We finally went public with it last year. I wanted to wait until we had over 100 lessons so we wouldn’t be advertising something that didn’t exist. Once it got to 100 lessons it was like, ‘OK, let’s start telling people about it’. It’s all been privately financed, nothing to do with taxes or government money. It’s all free, all of the videos and music are licensed worldwide in perpetuity so teachers can use it. This is the first time now we’ve connected it to a tour. We thought why not show a bit of gratitude, first of all, to these teachers who are under-appreciated and underpaid. We invite them to the soundcheck, and then we do a workshop in between the soundcheck and the show with our foundation people, we feed them and then invite them to the show for free. We just did it for the first time in America and we added 2000 teachers to our register for the curriculum. So it’s all starting to work very well, the teachers love it – no one has one negative word about it. It’s been amazing, really. That’s the good thing about taking 10 years to do it right… you’re probably going to get it right!”

You can find out more about the Teach Rock campaign here. Subscribers can read Steven Van Zandt's Aftershow here.