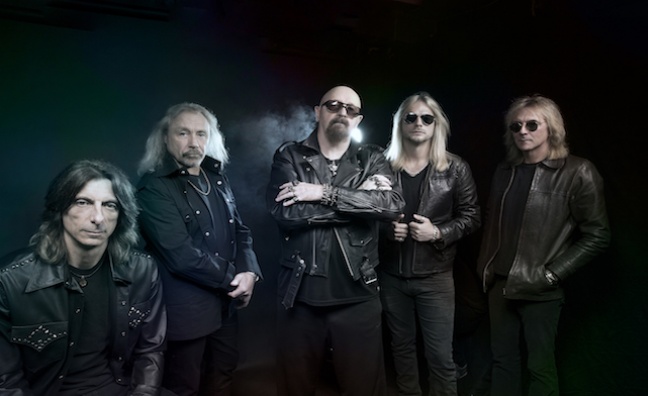 You will not mistake Rob Halford for anyone else. You couldn’t. When Music Week greets him at Sony’s London HQ he looks like – and, indeed, is – every bit a metal deity made flesh. It’s an appellation he has well and truly earned. For what is rapidly approaching 50 years, he has led Judas Priest and played an inextricable role in spreading the gospel of heavy metal itself, selling some 50 million albums in the process.

He may still be able to issue piercing screams like no-one else, but in person he is down-to-earth, soft-spoken and in the mood to talk.

“You can have half an hour of my life,” he smiles as the interview begins.

The reason for his good mood? A little thing called Firepower – Priest’s 18th studio album which is released today (March 9) via Sony. It is a record that captures them in triumphant form, but one that also arrived with the sad revelation that veteran guitarist Glenn Tipton had been diagnosed with the onset of the early stages of Parkinson’s 10 years ago.

An official statement read: “Right now Glenn is able to play and perform some of the Priest songs that are less challenging, but due to the nature of Parkinson's progression he wants to let you all know that he won't be touring as such.”

Despite this obstacle, Glenn still plays on the their latest album. It’s a thrilling release – possessed with the kind of energy that defies any notion that a band whose 50th anniversary is looming will naturally be taking things a bit easier.

Reclining on a sofa, Halford is trying to explain what he feels when he listens to the album’s ferocious title-track.

“God, I can’t tell you…” he smiles. “When I listen to that track I feel so relaxed. It’s bizarre! I’m screaming my head off and feel relaxed, like, ‘This is exactly what we need to do.’”

Here Music Week speaks to Halford about the album’s creation…

How are you today, Rob?

“I’m doing really good, thanks. I’m excited about a lot of things. I’m still flying the flag of British heavy metal – which I think is what it’s all about in its purity.”

What was the vision behind Firepower?

“Referencing [2014 album] Redeemer Of Souls, I just felt we needed to get harder and heavier. That’s all I can remember saying to Glenn, Richie [Faulkner, guitar], Scott [Travis, drums] and Ian [Hill, bass]. We needed to think about everything this band had done in almost 50 years and reference the really, really important parts of what we feel we’re about – which is obviously getting down to the riffs and song construction and getting it in a simple, concise way. And also be very, very attentive to all the detail of the sounds. If the snare drum on Firepower wasn’t right it would affect the whole thing like a pack of cards.”

After nearly 50 years, some artists might let go of that microscopic attention to detail…

“That’s staying power, that it is! That’s probably part of the equation of why we’ve been able to move along so well: we have so much fun writing our records and songs, but we take it deadly seriously. We are concerned about the high hat four bars in [laughs].”

When it came to writing the lyrics, what was going through your mind?

Has that ever been a concern – have you ever thought, ‘Wait, have I written this lyric before?’

“It’s not a challenge, it’s more an attempt to cover some lyrical ground that I may not have covered before. And a lot of it has been covered, you’re just dressing it up differently with the same value and importance, you’re just finding words you’ve not used before, or phrasing. I start at ground zero with a bunch of what I call bullet point words, using my iPhone these days. Say, ‘construction’ – what could that be? You start from there. I’ve never used the word oyster in a heavy metal song, but I did! How can you put oyster in a heavy metal song? But we did, and it works great. That’s the fun we have when we’re putting lyrics together. It’s like, ‘Rob go and write lyrics,’ and so I sit in the kitchen with a pencil, paper and my trusty thesaurus and my trusty bullet point words. And once I’ve got the plot of the song I’m just off – and I always write too much…”

What has been occupying your mind lately when it comes to lyrics?

“Children Of The Sun referenced climate change – and we covered that territory with Savage from the Stained Class album. Never The Heroes has, in my mind, a reference to a song called Dying To Meet You, from Rocka Rolla – the first record we ever made. The world hasn’t really changed that much, I’m afraid. There’s still conflict, starving people, disease, mental illness, drug and alcohol abuse – I know that sounds terribly negative, but that’s just the reality. We can go ‘living after midnight’ together, which is great, but we can also balance that up with some substance to it. You’ve got to be very careful, because let’s face it, the face value of music is enjoyment – you’ve got to enjoy it, even if it’s a strong, difficult message. How do you get to that place? It’s a lot of trial and error and working on your craft.”

Let’s talk about Glenn’s contribution on this record…

“Phenomenal. As important as it ever was, it was remarkable seeing him work through what he had to deal with putting this record together. It was a privilege to work with him these past 10 years, and see how Parkinson’s can be so intrusive from day to day. Some days you’re great, some days you’re not, but he never let Parkinson’s put the brakes on. Even now, he’s openly said, ‘ I can go out and bang out Living After Midnight and Breaking The Law, but Painkiller, for example, is quite frustrating.'"

But he is still going to contribute going forward…

“Absolutely. We wanted to make that very plain in sight on the release that he has not left the band, it’s just his role has changed. I can’t wait to get together – and I’m talking maybe three years from now – to be with Glenn writing the next Priest album. Why not? That’s what we do. We’re a working heavy metal band. Every time this band has gone out to work is to support a new release. We don’t go out and do the Greatest Hits, we don’t go out and do the ‘play blah-blah from front to end tour’ – we have to have a reason to close the door and go away for a year.”

“[That’s] slightly hypocritical, we did do it for British Steel – to celebrate the 30th anniversary. We wanted to do that because we’d never done it before. But we have to surround it with what we’re doing now. There was a time in my musical life that I hated the word ‘nostalgia’ because I thought it meant ‘washed up’ and ‘got nothing left to offer’, but now I realise that was a silly way of thinking about it. Really, the substance of who you are is an accumulation of everything you’ve ever done. So when you do something from 20-30 years ago, and it’s still doing the business now, that’s not nostalgia – that’s the value of the song.”

Is nostalgia a trap or something to celebrate?

“You know, we play Living After Midnight we say, ‘We’re going to take you back to 1981,’ which we are because you’re in a bit of a time machine – the Doctor Who of heavy metal! But it’s not in a, ‘Oh, I had a better life then,’ way. It’s not that. That to me is another element of what heavy metal represents: ‘Oh, I was two stone lighter then.’”

You seem too busy enjoying the present to look back…

“Yes we are, we’re very much in that way of looking at things, but we understand the value of playing Living After Midnight and Breaking The Law – it’s very, very important. Any other band that’s been in the great, grateful place in music – that’s had a long life in it – if you’re not prepared to accept that you have to go and play that song that was on TOTP on 1980-blah-blah, then you should really think about whether you want to do this anymore.”

Finally, what is the biggest challenge you face in your career?

“We use this word a lot, and it’s probably the go-to word when you’re referencing the last album you made or tour you did… it’s less a challenge as it is pulling your boots up and consistency. Consistency but also trying to step forward a little bit from the last thing you did, and when you step forward at least maintain something you achieved previously, and at the same time hope you’ve gone up one more rung, gone past 11, in your career. Which I genuinely feel we’ve done with Firepower. I feel tremendously relieved that it’s completed. You never really know how something’s going to turn out when you’re making a record, and we still make a record with a beginning, middle and an end. That’s important to us. We don’t just put a bunch of songs together – we try to tell a story of representation of where Judas Priest are in our lives.”