'I've come a long way': DJ Shadow on his new record, working with Nas and the lessons learned from EDM 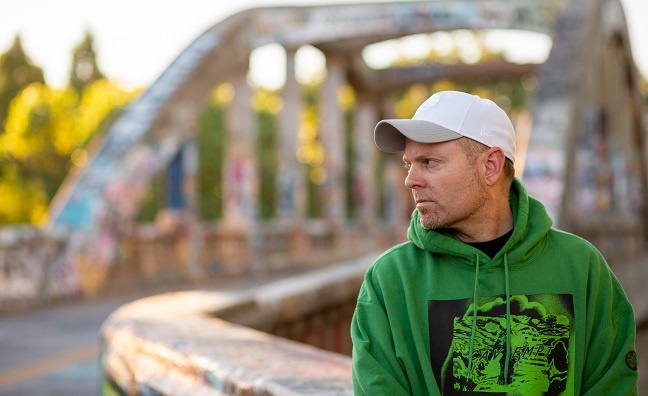 Last month, DJ Shadow joined the likes of Clive Davis, Max Lousada and Fergie in tackling our Aftershow feature and reflecting on his life and times in the music business, including his thoughts on sampling as it relates to the law and how he wished he could have made a track with the Beastie Boys...

Here, in an unread extract from our interview, he tells us more about how he secures his collaborations, the lessons he learned from EDM, why he no longer feels pressure to follow up his classic debut LP Endtroducing and more…

What was it about the title Our Pathetic Age that made it representative of this new body of work?

“I think a good title should really grab you and make you think. I have conversations all the time with a friend of mine and, at a certain point, he would take a picture of something and send it to me and I just started replying, ‘Our pathetic age’. For me, it seemed to encapsulate a way to respond to what was going on without going crazy. I think most artists feel that their role is to, at a certain point, interpret the world around them. I was thinking about that and other examples of where artists that are not necessarily known to be political occasionally have an album title that feels strongly political, like Prince's Sign ‘O’ The Times or Sly And The Family Stone, There's A Riot Goin’ On. So, on one level, I don't think the album is necessarily a political album but, as an artist, it's difficult to interpret exactly what's happening to the world right now."

And, presumably, that also applies to your experience in the music business too?

“Yeah, that's another thing I was thinking. Even just using music as a focus of that. Prince, again… we're losing all these great artists to bad pharma, and bad meds – where people are valuing corporate profit over the safety of this stuff. If you apply it to every other strata of our life, suddenly you just shake your head and go, 'What exactly are we dealing with?'”

In terms of the record, you got Nas and Pharoahe Monch together on your new song Drone Warfare, which is a pretty big coup. How do you go about securing collaborations – is it people are already friends with or is it a couple of Hail Mary requests?

“Every track is totally different. Nas I've known for a few years now because he co-owns the label and I did one song with him before. He's very particular, not only about the track he gets on, but who else is on it. What happened with that song is that I had a friend do something on the beat, and I said, ‘Look, there's no guarantees [you’ll end up on it] but I want to be able to put something in front of people because the beat is so wild.’ Lots of times with MCs in this era, if it isn't just a 70 BPM, 808 trap rap kind of style it's almost like they go, ‘What am I supposed to do with this?’ With Nas, obviously, he remembers different tempos and stuff like that, but I wanted this one person to put something on it just to make me be able to sell it a bit easier. Pharoahe Monch was like, ‘OK, I think I get what's supposed to happen’ and did his part. Nas heard that and was like, ‘Oh, I gotta get on this!’ So, I basically stripped the first guy off, Nas went on and then when Pharoahe heard Nas he was like, ‘I gotta redo my part!’ It was cool. Just to answer your question more succinctly, there's people I reached out to that I wasn't able to get and there's people that said yes, and it was super-easy right away, like De La Soul. It’s the total range of experiences, everything from super-easy to super-difficult to, ‘It didn't even happen because it was so difficult!’ [laughs]”

It does get wearing, the narrative around, ‘Are you ever going to be able to top the first record?’... With that box ticked with The Mountain Will Fall, I wanted to really amp up the sense of melody on this new album

Has the rise of streaming changed the way you make music? Some producers and artists say they need to get to the chorus in 30 seconds these days…

“I imagine you would get a different range of responses based on the genres and the sort of aspirations of the people you're asking. I mean, I think that's a relevant answer if you're working in pop music, or the type of rap that gets on the radio and stuff like that. But fortunately, or unfortunately, I don't concern myself with those things.”

What about the fact that a lot of people play music on their phones these days, does that change the way you produce?

“Well, yeah. From working with electronic artists and a younger crop of guys who really go in on sound design, I learned about things like adding fuzz to your 808s so that they have sonic representation on a cell phone. If you don't add some grit underneath an 808 it doesn't sound right. Adding those little kind of tricks, that's something that I really feel like I've come a long way with. I feel like I almost had virtually no growth as an engineer for years. And then I'd say in the last 10 years or less, probably six years, I feel like I went from second grade to high school.”

What prompted you to search that stuff out?

“I'll tell you why, honestly. For my [2011] album, The Less You Know, The Better, I made it almost entirely on headphones and that's fine. Endtroducing was made almost entirely on headphones, I don't think there's any right way or wrong way. But I remember touring that record in 2010, 2011, 2012 was really when I had to confront full-on the EDM explosion. Because I'm a DJ, I was getting booked at festivals alongside dubstep acts, big house DJs and stuff. The music they were playing was pumping… And the music I was playing for my album wasn't! It doesn't make it any less valid but at the same time if I could be myself and have it sound good sonically and fill that sonic spectrum… that became my No.1 mission after that album. I always try to grow and add something into my tool belt for the next record or for the rest of my career and that became my No.1 priority. I came off the road and reached out to guys that I liked on the scene, not EDM necessarily, but whatever you want to call post-dubstep, proto-trap like Hudson Mohawke-type artists. When I was doing festivals in the late 90s, early 2000s, I was competing against nothing but rock bands. I do think it's healthy to look around and go, ‘OK, how are they winning? Why are they winning?’ If I want to have some longevity in this business, I better figure out things that I can add that don't betray what I'm doing, but enhance it.”

Finally, around the time you did the Endtroducing 20th anniversary reissue you seemed to suggest that people expected you to keep on making that record again. How much of a lingering frustration is that?

“On my last album [2016's The Mountain Will Fall], the narrative for me, my team and my label was to steer the narrative to the here and now. It was my first album where I was able to flex what I felt were all these new things I learned from all the people I was studying from. There were still samples and stuff, but the palette had widened considerably. And that album had what is now the most successful song I've ever made [Run The Jewels collaboration Nobody Speak]. We feel like we checked that box: we had a successful record that is contemporary that was successful on any measurable scale that you'd like to use. So, going into this record, I went, ‘OK, that's awesome' – it was a huge weight off my shoulders in a way. Not that it really was on me, but it does get to be wearing, sort of the narrative around, ‘Are you ever going to be able to top the first record?’ With that box ticked, what I wanted to do was really amp up the sense of melody on this new record. It's something I've always been slightly self-conscious about: I can fumble around and I took piano lessons as a kid so I understand where my fingers are supposed to go and, generally, what's going to be discordant, but it's all by ear. I started to notice over and over that when I would sit down to write music that I was always kind of defaulting to the same thing. And so I started forcing myself to never just play one note, there was always going to be at least two or three notes being played at the same time.”