"I want to go out with a bang": Elton John announces details of his final farewell global tour 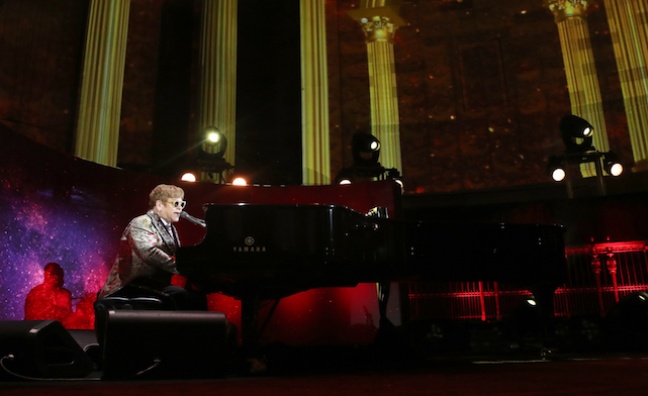 Christened the Farewell Yellow Brick Road tour, the series of shows will span 300 dates, and run across three years on five different continents, starting in 2018.

"It is the last time that I will be touring and travelling the world because my priorities have changed in my life," he said. "I want to go out with a bang, and say thank you and leave people thinking, 'God, I saw the last tour and it was fantastic.'"

John made the announcement via a live, tech-infused event in New York, LA and London, with exclusive VR180 live stream supported by YouTube. Part of the announcement included a surprise mini-set by John and a VR video.

The singer said he had made the decision to dedicate more time to raising his children. “We had children and that changed our lives," he said. I've had an amazing lfe; I've had an amazing career; I've been so incredibly lucky and my priorities now are my children, my husband and my family.

Vivien Lewit, global head of artist services at YouTube, said. “We're honoured to deepen our relationship by supporting the exclusive live stream and 'behind the scenes' videos in VR for this special moment in pop music history.”

"Things have changed in the music business a lot and we've definitely gone after streaming, YouTube and people like that, because if you write a song, you want people to hear it and you want them to hear it and become a part of their lives," said John. "And luckily enough I've always had a younger audience because of things like The Lion King. And I do a radio programme for Apple for which I play a lot of new music and it keeps me current. And I'm definitely involved in streaming - I want my music to be heard."

The tour will kick-off in September 2018 in America and is set to take on UK shows in both 2019 and 2020. Specific venues, dates and ticket sale information will be confirmed in September 2018.

“It is truly an honour to be associated with Elton John, one of music and pop culture’s most legendary, innovative and unrivalled performers,” said Jay Marciano, chairman and CEO, AEG Presents, promoters of the global Farewell Yellow Brick Road tour. “In a manner and style that could only be conceived by such a renowned artist, Elton’s Farewell Yellow Brick Road concerts will be the ultimate and final opportunity for his millions of fans around the world to experience this generation’s most incomparable and iconic entertainer.”

John released his latest greatest hits collection, Diamonds, in November 2018 and said he will continue to make music. "When I stay I'm stopping touring, I'm not stopping music. I will be hopefully making more records, I'll be writing more musicals or I'll be doing more exhibitions with our photography, but mostly I'll be taking my kids to soccer academy, which is the most important thing."

While his touring days are coming to an end, John said left the door open for a future venue residency similar to Kate Bush's 22-date run in Hammersmith in 2014.

For updates and ticket information, head to Elton John.com

You can watch the full launch event video below: