'I was living on $10 a day': Foo Fighters drummer Taylor Hawkins reflects on his early career 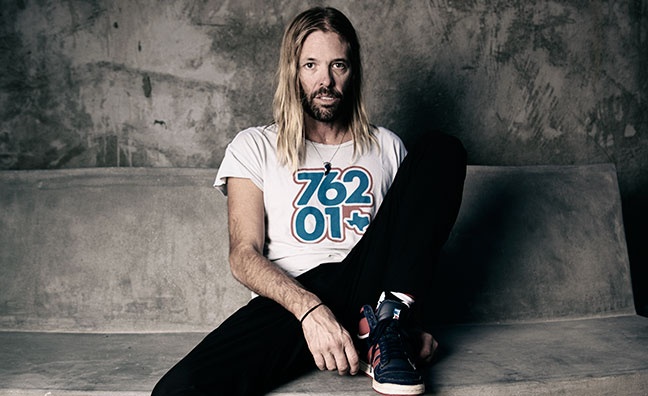 To celebrate its arrival, earlier this month Hawkins joined the likes of Clive Davis, Max Lousada and DJ Shadow in tackling our Aftershow feature and reflecting on his life and times in the music business, sharing memories of everything from touring with Alanis Morissette to meeting David Bowie.

Here, in an unread extract from our interview, he tells us more about his new album…

You’re already in one of the biggest rock bands in the world, so why is it so important to you to put this new album out?

“There's something in me that has to get this out of my system. I have to write songs, I have to make records. I guarantee you, if for some crazy reason Kurt Cobain wouldn’t have died so early and Nirvana was still a band now, Dave would still be doing the same thing. There would be a Foo Fighters, it wouldn’t be as popular because he'd be busy in Nirvana all the time, but he has to do it. He has to make Foo Fighters records. That’s just what we do. In Foo Fighters, my job is to just play drums. And sort of along the lines of what the Grohlmeister wants, and he gives me room to move, but he knows what he wants, they’re his songs, and obviously he knows how to play the drums, so he knows how the fucking drums should go. So, my role in that band is to fulfill his desires for the rhythm section of the band while he's up front doing what he does. That is enough for me in the Foo Fighters, I get to sing a little bit here and there and that's great! That's enough when I’m in the Foo Fighters. But when I get a moment outside the Foo Fighters, I have to get these songs out of me. I just like the creative process of writing songs, I like singing!”

Your personality very much comes across in these new songs, there’s a real sense of colouring outside of the lines of a Foo Fighters song. It’s always interesting to see what musical paths people take when they temporarily cut loose from the band…

“Chris Shiflett [guitar, Foo Fighters] goes country! You know, for better or for worse, when I was a kid and Pete Townshend went to make a solo record, or Roger Taylor would make a solo record or any of these people from my favorite bands, I’d always go check it out. Because I want to know what drives them musically – how they found their position in the band that I love so much, and what they would do had it been just their band.”

“Well, it's funny, I was editing the video for I Blew It at an editing bay down in Culver City, which is adjacent to Venice Beach and that’s where I lived when I first moved to LA to try and become a famous rock dude. It was a scary place: there were gang bangers and freaky people on the boardwalk. It’s creepy. The underbelly of the place was really dark, especially back in the ‘90s. It’s a little less gnarly than it was, but in 1990 it was fucking gnarly. Anyway, I had an hour to kill so I walked to where my old apartment was, which I shared with three other dudes. It was fucking disgusting… I was living on $10 a day back then, I would eat a slice of pizza for breakfast/lunch and a slice of pizza for dinner, or this chicken teriyaki bowl for three bucks, and then the rest of my money went on cigarettes. So I went to that apartment, looked at it and just sort of thanked the fucking heavens that it all worked out. I remember being depressed on a certain level when I was 18 and 19 years old, living there watching the psychos and the fucking gang bangers and stuff. I was completely out of my element with no real band and no real future ahead of me. I didn't know how to put a new band together. I tried to put bands together there, but nothing really seemed to come together too much and look at that apartment and I see my 18 year old, 19 year old self sitting in it thinking, ‘What the fuck am I going to do in my life?’ I reflect on that and it really is a good reminder of just how fucking lucky I am.”