In the eye of the storm: Stormzy's manager on the MC's incredible rise 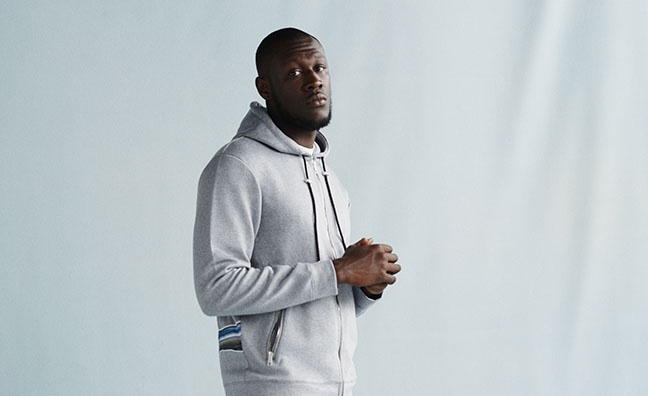 “Make sure you all get home safely.” Those were Stormzy’s final words, uttered once the strobes had finished flashing and one last chorus of Know Me From had all but reduced O2 Academy Brixton to rubble. On the third of three sell-out shows a few miles up the road from his Croydon neighbourhood, Stormzy proved what most of those with even a passing interest in him or his music know already – that he’s one of the most likeable characters in pop right now.

Lots of big moments in @Stormzy1's show, but none bigger than the grin he wore all the way through it. He's getting bigger... #stormzy pic.twitter.com/uazjdxgsVa

Apart from the occasional bit of purse-lipped, arms-folded menace, or whites-of-the-eyes intensity while rapping, the man they call Big Mike didn’t stop grinning once. The smile was there when the screens flashed with a stained glass window impression of his face during an epic Blinded By Your Grace Pt,2; when he was joined by a tracksuit-clad band of young back-up dancers for Return Of The Rucksack; and when Ed Sheeran bounded out to do Shape Of You.

Sheeran’s appearance – brilliantly incongruous and sandwiched between Ghetts, Chipmunk and Wretch 32 – helped sum up just how big things are getting for Stormzy. After bear-hugging his ginger mate at the song’s climax, he watched him walk off stage and said, “Ed fucking Sheeran guys, fucking hell, how the hell did we get here?”

By here, he means a glossy, meaty show that already looks built for venues bigger than Brixton. He means being in a situation where he’s made a No.1 debut album that’s shifted 148,000 copies. He means being at the forefront of a sound, style and movement that’s on its way to dominating popular culture in the UK.

To find out how he’s doing it, Music Week asked Tobe Onwuka, long-time friend of Stormzy and founder of his #Merky management company. Read on for the full transcript of that conversation, which took place a few days before the first Brixton show.

How big a moment are the three Brixton shows?

It feels like a jewel. There are bigger shows to come in the future, but we’ve probably done over 400-450 shows since we’ve been working together and it feels like they all culminate at Brixton Academy, we’re putting everything into them. Brixton is the crown jewel.

Where did the idea come from?

We had two UK tours both sold out at Academy level so it was a natural progression. Demand didn’t really dwindle, but he took a break and wasn’t performing live, so it bubbled up and people were more excited to see him. We had the option to upgrade but Brixton being not just an iconic south London venue, but an iconic London venue in general for both international and home acts, it still felt the right place for a London show. Of course the demand meant we wouldn’t get away with doing the one date there anymore, so we had had to add the extra dates.

Did you expect them to sell so fast?

The initial thought was to do one date at Brixton, which is amazing in itself, selling 5,000 tickets down the road from where you were raised anybody would be excited about, but seeing that we were able to add a second and then a third date, I couldn’t tell you that I thought that would happen.

This is a big moment for grime and UK rap too, what’s it like to be at the centre of it all?

You’ve kind of got to wait for them to happen. While you’re involved you’re just working and getting things done, once the dust has settled you get to look at it and really appreciate what you’ve achieved. As much as I’m excited it probably wont set in until after the show has happened.

So is this a golden era for UK rap?

Yes. Being outside of the genre before starting to work in it, it definitely does feel like that, where it’s special, a golden age. Things are in a really good position where this could be a continuation, I definitely don’t feel like it’s still on a knife-edge and people aren’t sure whether it’s going to stick around. We’ve made waves towards securing our position for the future.

How far ahead is Stormzy’s live plot planned?

How’s it going away from the UK?

Really well. That we’ve done Coachella alone is an indication. Across the continent a lot of major festivals have grime acts headlining or close to headlining. Internationally it’s growing and it’s in a really healthy place.

Has it been a case of changing perception of grime?

Not really, the majority of it is the artists’ willingness to work. Beyond perception, a lot of people are putting in the effort and really taking it seriously, I couldn’t say there are many artists out there that don’t see it as a full time career, there’s no one dipping their toes in. We’re taking it seriously; every artist has their team and networks.

After the No.1, Stormzy’s album campaign is still going strong, how have you orchestrated that?

With the team around me and ADA, who distributed the album. It’s a joint effort, me and Stormzy will figure out the bones of the ideas of what we want to do and then it’s delegation to the right team or the right person for the task. It starts with Stormzy and myself working out what we want to achieve.

So a lot of it comes from him then?

Yes, we’re very, very independent and with that means a lot of hands-on from the artist. There’s no smarter one than Stormzy when it comes to things away from the music itself, from marketing to promo, any way that he appears in public, he’s all over it.

Do you think that side of Stormzy has surprised people, how industry-aware he is?

Yeah, like I mentioned before, when you’re working you’re just making sure things are done and that you’re getting them right. You still get shocked and the response is still overwhelming.

Beyond music, he’s emerged as one of the most significant people in UK pop culture this year; did you think he’d be all over the TV and in the news so much?

We’ve always had the stance of, Why shouldn’t he be everywhere? What’s stopping it? The generations before might have had their own excuses but we look at the style of the music and think, What reason can you give for it not to be in these places? You’ve got so many genres that aren’t necessarily the most warm and friendly and definitely are in all these places, so what’s stopping us?

Was it easy to get that traction?

No way. It’s never easy; it’s been a task. Never easy at all.

What have been the hardest aspects?

The hardest thing is that everything’s brand new to us, we’ve never done it before so we weren’t coming off the back of mistakes we’d made already. It was like, We need to do this and make it work. If we had had a trial before things might have felt smoother or we would have been a bit surer of stuff.

Is that where people like ADA can come and give practical help?

With that all decisions are still your own. They can help and facilitate stuff but they’re never going to make a choice for you, they can never force your choices. It was definitely successful by any measure you want to use, but without taking anything away from them, it’s very easy to feel that they can just become your safety net. I’d be doing any artist or artist managers that were considering going into a partnership a disservice if I didn’t explain to them you are still very much independent, you’re not going to all of a sudden hand over an album and not have anything to do with it. Without their help or bodies on the ground in certain territories it would be so much more difficult.

What does Stormzy’s success teach people about how you can release music away from traditional channels?

The biggest lesson is inspiration, that you can do it, not necessarily by yourself but that it can be done. Stormzy says it himself a lot, a lot of people from where we’re from have had this taboo of, Oh you can’t actually do stuff; you’re not the right make up or the right person. The lesson that can be taken from what we’ve achieved is that you definitely can. All the barriers or the invisible blockades you thought existed can be overcome, just work hard and get up and do it.

Personality plays a part in making him popular, can you sum up why that is?

He is 100% real, which is quite refreshing in music. We were friends first, we grew up together so it feels like we’re always celebrating. Before any success we’re always proud of each other as friends, we’d be happy if even if we weren’t working together.