"In the next few years I can start relaunching my career": Mick Hucknall on the future of Simply Red 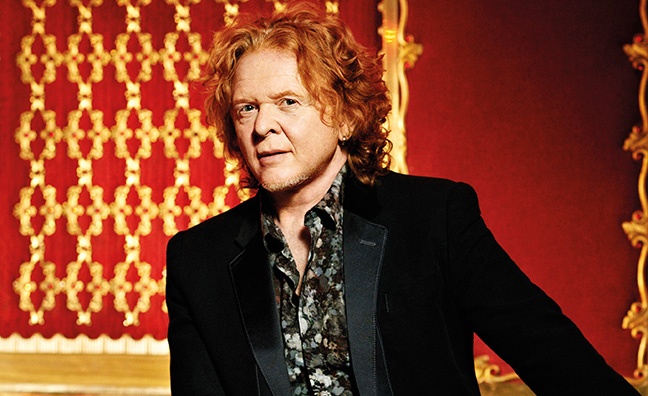 Today (November 23) Simply Red release their new live album/DVD Symphonica In Rosso (Live At Ziggo Dome, Amsterdam) via BMG. Recorded last October, it captures the group playing three very special shows accompanied by a 40-piece orchestra, delivering hits from throughout their career like Holding Back The Years, Stars and If You Don’t Know Me By Now.

Last month, singer Mick Hucknall spoke to Music Week for a special Hitmakers on the making of their ubiquitous ’95 track Fairground. Here, in an unread extract of the interview, Hucknall reveals more about how the group approached the prospect of playing with an orchestra, the next Simply Red studio album and why, contrary to what you may once have heard, they have most certainly not split up...

How did you approach Symphonica In Rosso? It can’t be easy recording with a 40 piece orchestra…

“The band will testify to this: I never rehearse. I just don’t need to. Generally, I just go in and do it, and I can do it. I realised this was a different kettle of fish. The invitation to do it came out of the blue, and I immediately jumped at the chance because the last time I’d performed with an orchestra was on Millennium night at Greenwich playing Sinatra’s My Way - which I had named as the song of the century. I got such a thrill performing with this sound behind me. It’s just amazing. I knew I would jump at the chance to do it again and then it came! I thought, ‘Yes! I’m in!’ We went to rehearsals and it immediately became apparent that it’s a different thing altogether than performing with a band. You have a conductor and they’re not conducting to the beat, they’re swinging their arms - you’re singing to a swing, a sway!”

Is it hard to do that while keeping your audience engaged?
“It becomes a question of timing, and where you actually place the beginning of the line of a lyric. With traditional pop, rock and R&B, you hear a backbeat and the timing is significantly easier. I look back at Sinatra and think the swing era is based upon that notion – it’s not just responding to the beat. I spent two days in rehearsals and I’m glad I did, because after the first couple of hours of the first day I was very intimidated [not] to know where I was in the track and where do you even begin a line? There was a beat, but it was masked by about 60 violins or whatever!”

So what was the hardest song for you to re-interpret?
“I recorded Sinatra’s A Very Good Year and Nature Boy, they were really tough. I struggled in rehearsals with them, but I’m so glad I did because it just added to my canon of experience. Playing with an orchestra really is a very, very different beast, but it was a great experience.”

Can you take the idea further with either new music or tours?
“No, I’d be very surprised if I do that. To me, it’s a one-off. In fact, I’ve just finished recording an album that is very much more in the vein of R&B-funk. People are going to move to this next record, if they’re not going to dance they’re going to be bobbing their head. It’s a very different record to Symphonica, so I think that will just prove in itself that I’m not going in that direction. This is just a total one-off. ”

How far into the next project are you?
“I’ve finished recording, I think you might hear it towards the end of next year. You know, there was a phrase used a few years ago by the media saying Simply Red had ‘split up’. That was a phrase I never used. What I did was stop Simply Red because I knew I wanted to bring up my daughter. It’s a complicated story, my dad brought me up by himself and I think it had an affect on me, but when I had my kid I wanted to be around. In the world of showbiz people get so fixated on their careers they don’t realise that family is the prize. That’s the mountaintop, right there. I knew that, and the thing is if I hadn’t stopped Simply Red at that point, there’s always the commitment to a cycle where someone will do a new release every two or three years. If I hadn’t stopped it, I would have been obliged to start working and recording and going through a whole process of promotion and touring and I’d have been away from my family. I thought, ‘I ain’t going to do that’. I wanted to enjoy being part of developing the personality of this young child and being involved on a daily basis. Now she’s 11 years old, I’m not saying the work is finished, but she’s more and more independent and I was just finding that I was writing song. I’m born to work, to make this music and I have to get on with it. It’s just different now. They always say the first seven years are very key to developing the character of a person, so I’m still there, but now I feel in the next few years I can start re-launching my career.”