Inside Dream Wife's campaign to broaden the music industry's horizons 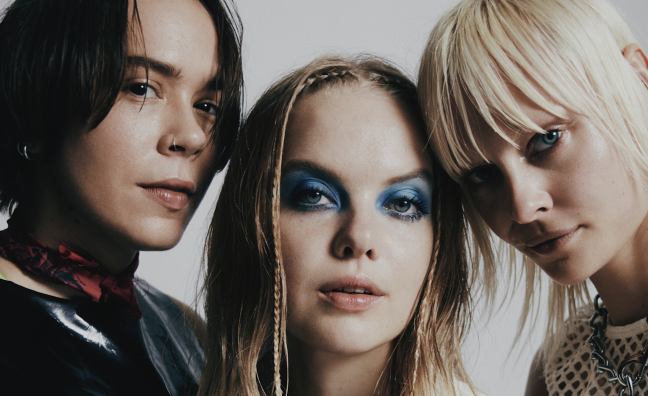 Dream Wife could be on course for a Top 20 albums chart finish this week, and they have a message for the music industry.

Produced by the all-female team of Marta Salogni, Grace Banks and Heba Kedry, the trio’s second record So When You Gonna was at No.11 after Wednesday’s mideek update, and the band tweeted an appeal for fans to “help change the game” and secure a Top 20 finish.

Dream Wife – made up of Alice Go, Rakel Mjöll and Bella Podpadec – pointed out that theirs is the only record currently in the Top 20 to be produced entirely by women. Apart from Sparks’ A Steady Drip Drip, which is out on BMG, it’s also the only release on an indie label. Released via Lucky Number, the album is up against the likes of Dua Lipa, Elton John, Ed Sheeran and Queen.

The new album already stands to make a significant chart improvement on their debut, which hit No.60 in 2018 and has 8,651 sales to date. The trio have almost 150,000 monthly listeners on Spotify.

The former NME cover stars have consistently spoken about equality in music, and have now told Music Week that their chart impact shows that change is possible. As the final hours of the chart week approach, Go and Podpadec talk about their fight for change, and what the music industry must to do better itself.

What would a Top 20 finish mean for Dream Wife?

“Having a Top 20 album isn’t just a number, apparently. For a band like us, on a small indie label, it would mean more radio airplay, better slots and stages at festivals and getting booked to play festivals in general that often have a lack of diversity. It opens doors that often are closed for a band like us.”

You tweeted about yours being the only record in the Top 20 to be produced entirely by a woman. Why does that imbalance exist and what does it say about the music industry?

“We exist in a hetro-patriarchal paradigm of binaries, systematically prioritising the voices of some (cis white wealthy men) at the expense of others. Although a huge amount of work has been done to address this historic injustice, we are still operating from within this structure. Art and music especially is a space for imagining different ways of relating and new ways of being. The disparity of representation within the music industry is symptomatic of much larger systems of control that we have to work together to pick apart. Addressing gender representation within the industry will by no means fix the enormity of the issues created by patriarchy, but in working to dismantle systems that prioritise certain voices, hopefully this power will spill out and effect everything. In the words of Toni Cade Bambara, the role of an artist is to make the revolution irresistible and addressing power structures within our industry is one way of speaking to this.”

You also said you want to change the game, how can you do that?

“The way we chose to record So When You Gonna with an entirely female-led production team (made up of the incredible Marta Salogni, Grace Banks and Heba Kedry) was us actively aiming to move forward in a way that was ultimately practicing what we preach. To make the choice to work with such a talented and passionate team of women felt like the only way we could have made this record. With less than 5% of records being produced by women, this felt of high importance to the kind of process we wanted to both support and engage with. For artists to make decisions like this, continue to support gender equality in music and  to normalise these kinds of roles for women is a slow-burning and uphill battle. But day by day, by upholding this conversation and following through on the actions and choices we make, sharing our platform and supporting equality, we can all, together, make change.”

Dream Wife has always flown the flag for women in music

Do you feel optimistic that the balance will shift?

“This band in many ways is built on optimistic foundations. In order to do what we do you need a level of optimism. But in a post-pandemic world the future of the music industry, especially independent record stores, labels and venues, seems very uncertain. Right now, optimism is placed in a more dramatic swing of the pendulum; here's to feeling optimistic that the bright light these times have cast upon the injustice in the world will instigate the changes desperately needed on ecological, social and personal levels. Big shifts ahead!”

Does Dream Wife have an important role in the industry?

“Dream Wife has always flown the flag for women in music, wanting to support our peers and foster community. We did a call out for women and non-binary support bands for our debut album headline tour and the response was overwhelming. There is so much talent out there and we want to use our platform to shine a light on it, it matters to us. Our label Lucky Number allow us full creative control and support our message and the sharing of our platform with other women, trans and non-binary creatives, which has always been an attitude at the heart of our creative output. We have an amazing team behind us that also believes change in gender equality can be made in the industry. If we can get a Top 20 album, it shows this is possible for artists outside of the strictly mainstream cannon. We stand to broaden the horizons for non-males, and the future of the music industry.”