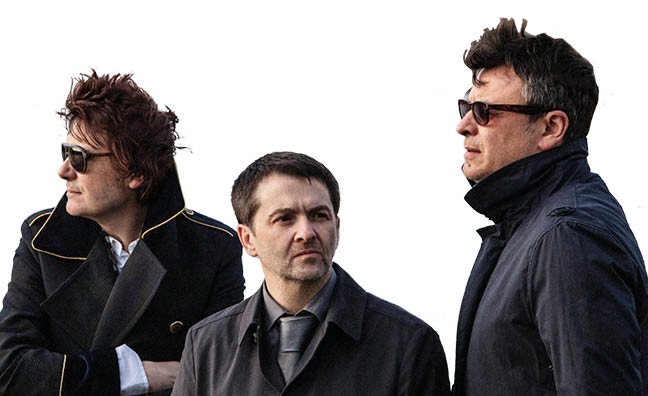 Stringer signed the Manics, who tour UK arenas next month, in 1991 and has remained close friends with the band, whose 13th album Resistance Is Futile is released via Sony's Columbia label on April 13.

"I am really excited by the album," he said. "I went to their studio in November and I was overwhelmed by how fresh, hook laden and uplifting the songs are. Their recording career is characterised by specific sonic chapters as is the case with most bands with great longevity and I think this album has a sheen and vividness unlike previous albums so it sounds completely contemporary.

"This view is clearly shared by the UK company because they feel very passionate about the album, even though the band have been signed for 27 years now!"

Stringer attributed the band's enduring success to their unwavering commitment to their craft.

"This is not a hobby or a distraction even after all these years and their attention to the recording process today is equal to when they were a young upcoming band," Stringer told Music Week. "Some of the working class values that they have focused on in their lyrics over the years also apply to their own work ethic. Also, most bands fall out because of either creative or personal or business pressures or all three and remarkably the Manics are joined at the hip still despite a journey that has certainly had its share of turmoil."

Manics manager Martin Hall, of Hall Or Nothing, credited Stringer for sticking with the band through their less commercially successful years.

"That's why they came through with [million-selling albums] Everything Must Go and This Is My Truth Tell Me Yours," said Hall. "[Stringer] kind of cut his teeth on them a little bit. He's been like the fifth member of the team in lots of ways and they're still friendly - he's still tight with them, even though he doesn't work directly with them."

“He’s always been there,” added bassist Nicky Wire. “Right from the start, he was desperate to sign us and I still speak to him all the time.

“Whether it’s him coming to my house at Christmas for a bit of cake and tea or just meeting up in London, he’s as much a friend as he is as a music business person.”

The Manics played live when Stringer picked up the Music Week Strat Award in 2014, and presented him with last year's MITS Award.

Wire also discusses the band's back catalogue and future plans here, while Team Manics reflect on their controversial 2001 trip to Cuba here.