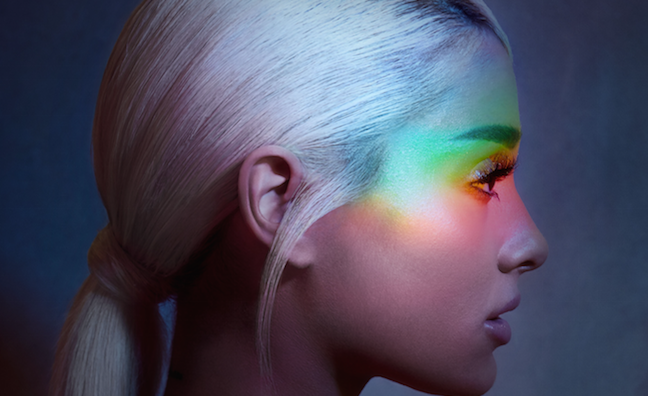 Although, ironically, it was her first album not to reach No.1 in her native USA – where it peaked at No.2 behind Drake’s Views – Ariana Grande’s third album, Dangerous Woman, was an enormous global hit.

No.1 in official charts – which, lest we forget, are fewer than 30 in number globally – in Australia, Ireland, Italy, The Netherlands, New Zealand, Spain, Taiwan and The UK, it was the singer’s biggest success yet. Grande’s new album, Sweetener – home to the international smashes No Tears Left To Cry and God Is A Woman - looks set to be even more successful. It showed its intentions by topping the iTunes tabulations in 82 countries last week, and now makes its first official chart debuts, achieving the highest yet weekly sale for the singer in the UK, where it is her second No.1 album, while opening at No.1 in Belgium (both Flanders and Wallonia), Ireland, Italy, The Netherlands, New Zealand, Norway and Sweden, No.3 in Germany and No.8 in Japan.

Nicki Minaj is a guest on the track The Light Is Coming on Sweetener, repaying Grande for her guest spot on Minaj’s new album, Queen, which opened at No.5 in Ireland and The UK, No.8 in The Netherlands, New Zealand and Wallonia, No.9 in Norway, No.11 in Flanders, No.15 in Sweden and No.18 in Germany last week. In retreat in all of them, Queen now adds debuts at No.2 in Canada and The USA, No.4 in Australia, No.5 in Switzerland, No.7 in France, No.14 in Finland, No.18 in Denmark, No.19 in Austria and Italy, No.20 in Spain and Slovakia and No.31 in Hungary.

Queen’s failure to earn Minaj the third No.1 of her career in The USA - where she has spent the vast majority of her 35 years - was a bone of great contention with the rapper. Minaj vented her frustration on Twitter, blaming chart compilers for allowing a bundled Travis Scott concert ticket/album deal for inflating his sales, and Spotify.

Scott’s Astroworld also remains at No.1 in Canada – where, as in America, it topped paid-for sales – and in The Czech Republic and Denmark but continues to fall elsewhere, having topped the chart in 11 countries in the last fortnight.  Its tenacity in hanging on to pole position in The Czech Republic – where Ed Sheeran’s ÷ is No.2 – and in Denmark, where it leads an all-rap top four followed by Drake’s Scorpion, Post Malone’s Beerbongs & Bentleys and Xxxtentacion’s ? – are further evidence that, while English-langauge rap previously didn’t hit quite the same heights in countries where English is not the native language, it now makes huge chart ripples almost everywhere.

One country that stands out as being less receptive to rap than any other major territory is Spain. Of the albums mentioned above, those by Travis Scott and Post Malone have failed to make the Top 100, while Drake peaked at No.40 and Xxxtentacion at No.53. In a chart that continues to be dominated by manufactured groups, flamenco singers and more traditional pop, Spain isn’t even too keen on homegrown rap – the last No.1 rap album in the country was Los Viajes Inmoviles, a chart-topper for Nach (real name: Ignacio Fornes Olmo) in 2014.