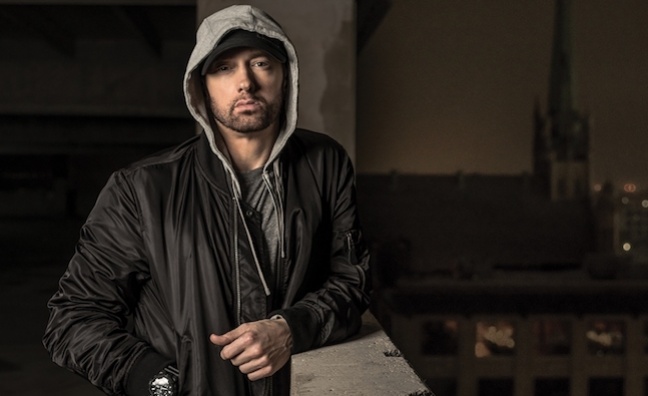 Kamikaze is associated with crashing and burning but Eminem’s album of that title is flying high, remaining at No.1 in all but one of the seven territories in which it debuted last week – Flanders, Ireland, New Zealand, Norway, Sweden and The UK – while opening its account at the summit in a further 10, namely Australia, Austria, Canada, The Czech Republic, Denmark, Finland, The Netherlands, Slovakia, Switzerland and The USA. The only country in which it is dethroned is Italy, where it migrates 1-6, toppled by 24-year-old local rapper Ernia’s new album, 68. Kamikaze makes less spectacular debuts at No.6 in France, No.8 in Hungary, and No.15 in Spain, and also moves 3-7 in Wallonia and 4-2 in Germany.

Its failure to become – at least for the moment - Eminem’s fourth No.1 album in Germany is due to the release of a new album by a 76-year-old singer/songwriter, the legendary Paul McCartney. His new concept album Egypt Station comes 36 years after his only previous solo No.1 – 1982’s Tug Of War – and 18 years after the compilation 1 became the last of his 11 No.1s in the country with The Beatles.

Egypt Station also debuts at No.2 in Flanders and The Netherlands, No.3 in Argentina, Norway, The UK and Wallonia, No.4 in Sweden, No.5 in Italy, No.6 in Japan and No.7 in Ireland.

K-pop act BTS’ third album in less than a year, Love Yourself: Answer was No.1 in three countries last week but loses its grip dramatically in all, falling 1-7 in their native South Korea, 1-8 in The USA and 1-9 in Canada. It does, however, jump 2-1 in Japan, where it sold 142,095 copies last week, of which only 1,277 were digital, a format that has never really taken off in the country.

Lenny Kravitz’s 11th studio album, Raise Vibration, has a very mixed first set of results, failing to chart in some territories altogether, while opening in the Top 10 in others. Its best placings come from Italy, where it opens at No.2 to become his seventh straight Top 10 album; and Germany, where is his ninth consecutive Top 10 album, opening at No.3. It also debuts at No.4 in Flanders and Wallonia, No.8 in The Netherlands and No.19 in The UK.

Finally, Paul Simon’s 14th solo album, In The Blue Light, finds the 76-year-old singer/songwriter putting a new spin on some of the lesser known songs from his canon, and debuts at No.10 in The UK, No.16 in The Netherlands, No.21 in Flanders, No.24 in Ireland, No.33 in Sweden, No.36 in Germany and No.55 in Wallonia.