"It deals with a lot of my personal life...It's been a dark time": Corey Taylor on Slipknot's new album 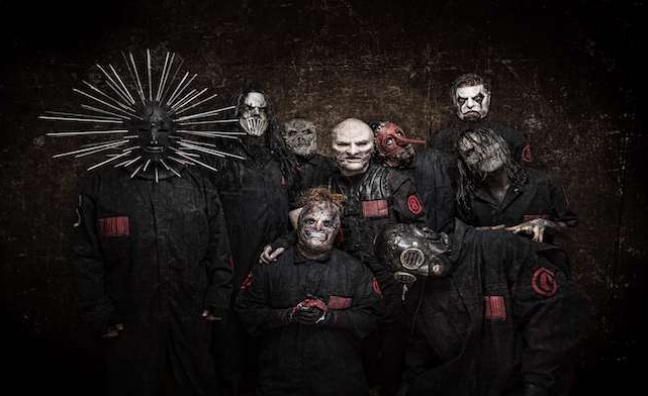 In the new issue of Music Week we round up some of the biggest upcoming albums to give you the ultimate 2019 preview.

The year is set to see huge releases from the likes of Lana Del Rey, Mark Ronson, AJ Tracey, Dave, Sigrid, Bring Me The Horizon and The 1975 – who will release Notes On A Conditional Form, the follow-up to last year’s blockbuster A Brief Inquiry Into Online Relationships. And that’s just to name a few of those featured…

One of the biggest bands set to return this year are Slipknot. The Roadrunner-signed act have retained their status as one of the elite names in metal for 20 years now, with every studio album to date going either platinum or gold in the UK. Last year the group released the surprise single All Out Life and confirmed they would be headlining Download Festival in June. With frontman Corey Taylor recently posting a picture of themselves in the studio – captioned “Guess what we’re doin…?” – all signs point to their sixth studio album emerging sometime in 2019.

Last year, Music Week caught up with Taylor for The Aftershow to talk about his life and times in music, fronting both Slipknot and Stone Sour. Here, in a previously unread extract from that interview, Taylor discusses the lyrics for the new Slipknot album, and how he’s managed to juggle two successful bands…

What has been inspiring you to write for Slipknot’s next record?

Corey Taylor (vocals, Slipknot/Stone Sour): “I can’t go into it too much because it deals with a lot of my personal life, but the last few years have been really tough for me. With the exception of my kids and my bands, it’s been a dark time for me. I didn’t relapse or anything, but it was just the depression that I was dealing with and the anger that I was dealing with that was consuming me. I had to get myself out of that situation, and now the lyrics I’m writing for the Slipknot album are all about that period of time, basically the last five years of my life just trying to get my head around everything, and moving towards the happiness I remember.”

Are there any governing principles you have when it comes to writing lyrics, or set ways of doing it?
“My mind is so fucking all over the place it’s not even funny half the time. For me, the quest has always been the perfect lyric, that perfect turn of phrase, that perfect set of stanzas to sit there and read over and over and be so delighted and tickled that you wrote them and so proud. You know, I’ve come close a handful of times but I don’t think I’ve written the perfect thing yet, but that’s why I keep going for it, I keep chasing that. That’s one of the reasons why I also try to write in so many different genres, I never pigeonhole myself into just rock and metal. I’ve branched out, I’ve done stuff here and there with other bands and genres, to put my ego in the backseat and sing other people’s lyrics and try to find meaning for myself in those lyrics.”

Was parking that sense of ego something you had difficulty with at first?
“Well, you grow into it, I think as you get older you feel more comfortable because you have done the work, the work is there. If you’re a younger man and you’re still trying to get through and still trying to crack the code or crack the surface, it’s tougher to go with that. Luckily, I was at a point in my career where things were going pretty well. The first time I ever sang someone else’s lyrics was Apocalyptica when I did I’m Not Jesus, and they even offered me to re-write stuff and I was like, ‘You know what, I know the background of what this song is about because it’s about child abuse,’ something that I know first-hand about from when I was growing up. So, I was like, ‘You know what, I respect the lyrics, I respect what’s going on, and it’s really good, so there’s no need for me to change anything.’”

The lyrics I’m writing for the Slipknot album are all about the last five years of my life... just trying to get my head around everything and moving towards the happiness I remember

Looking back, what’s the best decision you made in your career?
“The best move I ever made was joining Slipknot. Straight up, nothing beats that because at the time I was really happy with Stone Sour, but I was also looking to do something different. With Stone Sour I was the main songwriter at the time and I could’ve happily just continued there and tried to get signed, but there was something about Slipknot that really appealed to me. I knew if I got in that band it was going to challenge me in ways that I have never felt before. The second thing would be putting Stone Sour back together because it was exactly for the same reason that I joined Slipknot years before, to do something different. I think those two things are the best decisions I ever made when it came to my career.”

What’s been the key to juggling both?
“For me it’s all about focus, and it’s all about priorities, whichever one you’re in the driver’s seat of in that moment that is your priority and that is your focus. You dip your toe into the other one behind the scenes when you have time off, but when you’re in the driver’s seat of that band, whichever band is on at the time, then that is your main concern. That is the one you put all of the energy into, that is the one that you throw all of your focus and all of your work into. That’s why I’ve never let both bands overlap too much, as far as an [album] cycle goes or a recording session goes, it’s always about making sure that whoever is up has my utmost attention and I think that’s important. It’s when you start stretching yourself too thin that the work becomes not as creative. I’ve really tried to strive to just make sure that when I’m doing one, another’s on hold and then I switch when the time comes.”

What do you think it’s done for you, personally, to have those two musical outlets? Where do you think you’d be if you said Slipknot is all you can do?
“At the time – and this is speaking from just remembering how I was back then – I was very young, I was still very angry and even being the singer of Slipknot, creatively it just wasn’t enough at the time. I knew that I was nowhere near as good a musician or a writer for that genre as the guys in the band were in Slipknot. But I still had a part of me that wanted to write music, I wanted to write my kind of music, so I feel like if I hadn’t done Stone Sour, if I hadn’t split away and picked up the band that lead me to Slipknot in the first place, I feel like I probably would’ve drifted away even earlier. It would’ve been a lot harder for me to control the bursts, really in the ego and creativity and whatnot. I think doing Stone Sour saved my sanity in a lot of ways and helped me even out. I think it was very vital that I do Stone Sour, and doing Stone Sour actually made me appreciate Slipknot even more, appreciate the work I was doing with Slipknot.”

Why specifically?
“Just being able to tap into that place inside me that’s really a place I don’t talk about: weird places of pain, of darkness; a place of survival – of all the places that I have survived in my life, whether they’re situations or literal places where I was left and having to fight to stay alive in a lot of ways. That place in me needed a voice and it became about me rediscovering the love for Slipknot that actually I had before I was even in the band, I remember loving Slipknot even before I was a member of that band and realising that it was these things that I wanted to get out that drew me to actually join in the first place.”