'It's a landmark for us': Matador GM celebrates albums chart glory for Queens Of The Stone Age 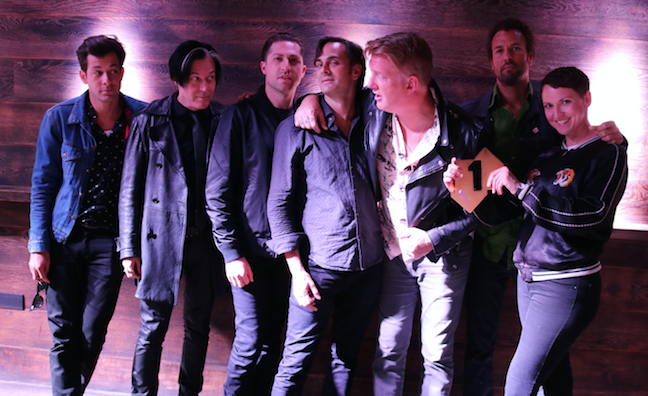 Queens Of The Stone Age have been praised a rock band that’s “as real as it gets” by Matador Records general manager Natalie Judge.

Celebrating the group’s chart-topping seventh album Villains - a first UK No.1 album for both the band and the label - Judge (pictured, above, right) told Music Week: “They don’t do things by halves, they take no prisoners and they work hard for their fans and their art”.

Villains beat Ed Sheeran’s ÷ and The War On Drugs’ A Deeper Understanding to No.1, selling 32,056 copies to enter the charts in top spot. The total comprises 23,175 physical sales, 7,063 downloads and 1,860 sales equivalent streams. It is the band’s third highest first week tally and their fifth record in a row to post sales above 30,000 in week one.

Last time out, in 2013, Queens Of The Stone Age charted in second place, behind Disclosure's debut Settle.

But not this time. With Mark Ronson (pictured, above, left) on board as producer, the five-piece, led by frontman Joshua Homme, have triumphed. Here, Judge takes Music Week inside a campaign that has seen the band play Reading & Leeds Festivals on the same day, take over Maida Vale Studios and keep well lubricated on tequila…

How did Matador get this record to No.1? What did you do differently to that last one, for example?

We just made sure that Disclosure didn’t have an album out this week! (Disclosure beat us to No.1 on the last album.) We were lucky to have an incredible album for starters. The artwork by Boneface made for some fun marketing material, and it helps that we had a great radio single in The Way You Used To Do, and an amazing video [an Apple exclusive] to boot.

Was a No.1 always the target?

Of course: we were No.2 last time, so we had to get it across the line this time.

What have the campaign highlights been? It felt like the Reading & Leeds shows were significant…

Doing Leeds & Reading in the same day was definitely a fun, if exhausting, part of the last week. The band have committed a lot of time to making the UK work, so having a double party on release day felt apt. Plus the only way to get them to both festival sites in time was for them to fly in a helicopter, so I think they enjoyed that part.

Joshua Homme is on the cover of the NME this week, how important has press been on this record?

Hugely important - Joshua was on the cover of Q also. He gives a very good interview, there’s always a story to tell with him, no matter what, so press love speaking to him. We definitely still see the importance of press with campaigns as a way to tell a story and tie a campaign together.

What else went down during release week?

The band worked hard. They made it to Germany, France, Belgium as well as the UK to put a shift in with promotion for the record and play to the fans. We took over Maida Vale on Wednesday for BBC Radio 1 and they drank London’s supply of Fortaleza dry. They definitely made the most of it.

How important was Mark Ronson as producer, what does his presence mean for the record?

Mark and Joshua have a pretty special connection and you can hear his importance on the record. A lot of people were skeptical about his involvement in the production, but it’s really a match made in heaven. He’s part of the Queens family now.

Why do you think the album has connected so well with the fanbase?

Queens have constantly reinvented themselves on every record - so much so, that if you think they’ll do something one way, then they’re bound to do it the opposite. I think the fanbase know that, and allow them to have fun, do something different, challenge themselves and not just make the same record again.

What does this success say about the power of a good indie label campaign?

That it’s not all about the majors!

And what about indies and their abilities to influence the top end of the charts?

The charts have changed so much, and even though they are still dominated by the majors, the indies can still rise to the top. It’s not all about chart successes, but when they come along we value them very highly. This is Matador’s first ever UK No.1, so it’s a landmark for us.

How important for rock and alternative music is that we have a band like Queens at No.1?

Queens Of The Stone Age are as real as it gets. They’re a proper rock band, they live and breathe it every day, they don’t do things by halves, they take no prisoners and they work hard for their fans and their art. They’re an inspiring group of people to work with, and I hope that them getting their first UK No.1 on their seventh album shows that you can still achieve these landmarks even 20 years into your career.