"It's a record we're all proud of": Alice In Chains reflect on their new album Rainier Fog 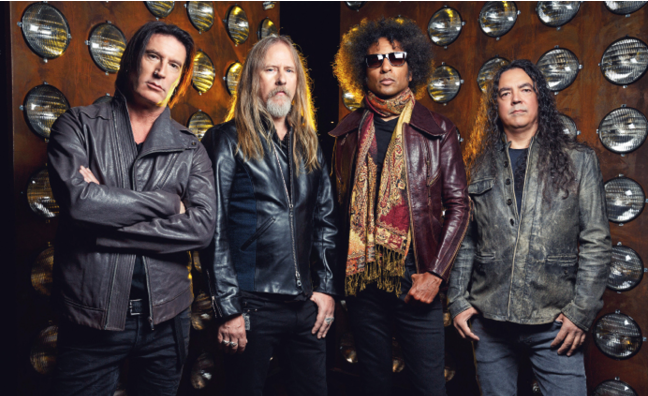 This week the legendary Alice In Chains are back in the UK Top 10 with their new album, Rainier Fog according to the latest Official Charts Company data.

Not only does Rainier Fog – an allusion to Mount Rainier, which looms ominously in the distance of Seattle’s skyline – mark a phenomenal return, it is also the band’s first for BMG and their first new studio album in half a decade.

In our July feature, Alice In Chains’ Jerry Cantrell, William DuVall, Sean Kinney and Mike Inez, plus David “Beno” Benveniste, founder at Velvet Hammer Music And Management Group and Zach Katz, president of repertoire and marketing at BMG US, revealed their grand plans for the album. Here, the band take take us further inside the making of Rainier Fog…

What was it about the title Rainer Fog that made it fit the album as a whole?

Jerry Cantrell: “It represents, to me, the obscurity of the outpost of Seattle – a tiny place outside the musical universe. It represents where we all came from: the obscurity and the humble beginnings and rising through all that and making the impact that we all did together. It wasn’t about any one individual. It’s not about me, it’s not about us – it’s about all of us. And it’s about a lot of people who you’ll never know who were key in that, too. Family, friends. It’s a lot to chew on, it’s a big history. But it’s a pretty cool thing that 31 years later we are still here and still going and it’s a fucking great record we’ve made.”

How did you approach the recording of the album?

Mike Inez: “Initially, we make records for us and it’s like, ‘Hey, do you like that?’ And then two weeks later its, ‘Ah, I don’t like that so much’ and then it’s, ‘That’s out!’. So the 10 songs that we have, have made it through all the filters. It’s not our record anymore – it’s your record. From our side, we get a kick out of watching everybody else’s reaction.”

Cantrell: “One of the fun parts is when you’re all done [recording] and you have to think about how the whole thing fits together as a piece of work. It’s kind of funny because we all made our lists, and the front and the back were pretty much identical – it’s always the middle where things differ and we have to try to figure out where to put stuff. Surprisingly, pretty much everyone thought The One You Know should go first and then All I Am at the end. It’s kind of how we do all our records. We always know where it starts and where it ends.”

For me, it’s good having time to step back from it all. It’s not healthy to have this be your whole identity all the time

Jerry, you’ve said previously that making a record never gets easier. Did that hold true for this album?

Cantrell: “Absolutely – it’s fucking hard work, and I’m glad to have it. Our whole career has been a marathon, not a sprint, and a record is sort of a microcosm of that. Once you make the commitment to make that step, you are not stopping until it’s done. That’s a good two year chunk of time from the beginning of starting to working together to getting into the studio and recording it, to figuring how it’s going to come out: it’s a fucking commitment! And it’s a worthy commitment. I’m proud again to have gone through that process with my brothers, and to have come out the other side with a record we are all proud of.”

Inez: “Every album has been an honest record of where the band has been at that particular time. It’s honest and organic – that’s what I love about a lot of the Seattle music, those bands were really raw, and interested in finding out who they are as a group, as opposed to these mixed and matched projects with 10 songwriters or maybe more. I can smell it a mile away when a band are constructing shit tunes, be it a metal band or a country act, whatever.”

Like that whole notion of people making music these days to suit a streaming algorithm?

Mike: “We don’t do it that way. We get into a room and make a bunch of fucking racket, and 80% of it is shit, but 20% of it is fucking great, so we are very honest about that process. If something is shit, then I’ll say, ‘That’s shit.’”

Cantrell: “We have to put it through a shit ton of filters before it gets anywhere good.”

You suggested the album was like a bookmark in time: what does it capture this time around?

Cantrell: “Songwriting to me is taking something small, an honest emotion – whatever that emotion might be – and putting it into something and passing it on to you [the listener] and seeing if it elicits that emotion. Or even another emotion from that which I intended! It doesn’t matter – just something. The best songs and the stuff that is most dear to you in your life, is the stuff that makes you feel. We’re not that different; we are all pretty much the fucking same, and in different parts of our life we are all going to go through the same shit. It’s easy to be relatable as long as you’re being honest and putting it on paper. We’ve been really lucky to have been doing it for a lot of years. Those songs mean a lot to people, just like it meant a lot to us to go through the process and write these things down. Let alone going through the years and still playing shit off our first record and having people trip on it! It’s fucking cool!”

Inez: “Coming to these places 31 years on, you see different generations: older guys, and their sons, and then sometimes even younger kids. And they’re all singing these songs and it’s just really indescribable.”

Cantrell: “Lyrically, some things are very specific, but I think the cool thing about music is that it doesn’t just have to be some script going over what happened. They’re like collages, little bits and pieces of stuff, because I can’t sit down and tell you what happened. I can only tell you bits and pieces, and lots of it is subconscious or emotional too, or deep down there as well. Things change meanings over time too; songs mean different things to me as you write them.”

We get into a room and make a bunch of fucking racket, and 80% of it is shit, but 20% of it is fucking great

It’s been five years since your last album. What do you make of the music industry you’re coming back to?

Cantrell: “We have been lucky and privileged enough to be able to do things at our own speed and our own pace and not be dependent on having to crank records out every year. It’s just what works for us and what we are used to doing; we cranked them out early in our career where we had a much more intensive record making process.”

Cantrell: “The last three records that we have done together have had about the same cycle, a four-year cycle, but two of those years are spent writing, recording and getting the thing out. And it takes about a year to take a bit of time off to relax a bit and have a bit of normalcy and step away from this a bit. For me, it’s good having time to step back from it all. It’s not healthy to have this be your whole identity all the time.”

Inez: “We’d be writing songs about the air conditioning in the tour bus being too fucking cold to get to sleep last night! There’s not a whole lot of life going on there...”

Subscribers can read the full Alice In Chains interview here. You can watch the video for the band's single The One You Know below