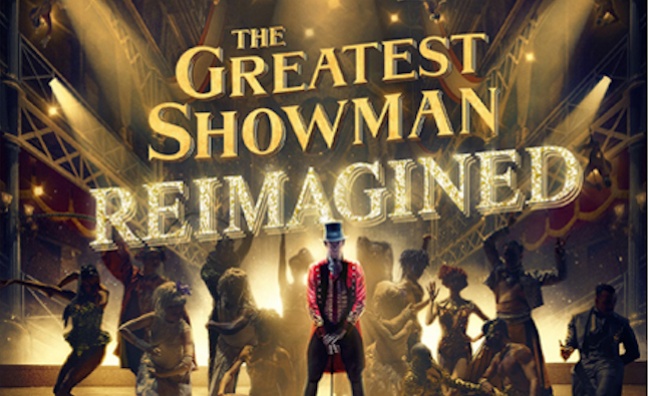 The Greatest Showman is still selling strongly as it tries to catch Cliff Richard to return to the Top 3 this week. Almost a year after release, its sales so far are 1,367,024, according to the Official Charts Company.

“It is clearly alive and kicking,” said Cook. “It looks like it’s going to be right there at the top of the chart, pre-Christmas.”

Now there’s an official spin-off album, The Greatest Showman Reimagined, featuring all-star covers from acts including Panic! At The Disco, Kesha, Kelly Clarkson and Pink, whose version of A Million Dreams made No.11 last week.

The album has been classified as a compilation and is currently at No.1 on that chart. Last week’s opening sales of 25,911 were just 702 off those for the original soundtrack. But The Greatest Showman Reimagined could claim to be the bigger seller: its total was just based on physical and download sales, as the OCC does not register streams for compilations.

“Reimagined is exactly that, it’s actually a very inspired project which has obviously caught people's attention if you look at the way the album is selling,” said Cook. “Just as it says on the tin, it’s been very elegantly reimagined and there is a big demand for it, so we are thrilled.”

It’s been very elegantly reimagined and there is a big demand for it, so we are thrilled

Cook noted the singles chart success of the cover of Rewrite The Stars by James Arthur & Anne-Marie, which debuted at No.16. UK artists have been integral to the album, with covers from Craig David, Years & Years and Jess Glynne, alongside Arthur and Anne-Marie.

“From day dot on that [Greatest Showman] project, after a lot of contortions we managed to ensure that the global exclusive TV performance was on Graham Norton for Keala Settle doing This Is Me,” said Cook. “On the [Greatest Showman Reimagined] album we’ve been running shoulder to shoulder with Kevin Weaver [president, west coast, Atlantic Records US] and Pete Ganbarg [president, A&R, Atlantic Records US] in terms of the A&R on that project, putting Jess and Years & Years in the frame and obviously James and Anne-Marie as well.”

He added: “That’s a great example of how we operate. It doesn’t matter if it’s signed here or if it’s international repertoire, the way we behave is the same, treating the artist and the project with all the respect, care and passion it needs.”

To read Music Week’s exclusive interview with Ben Cook pick up the latest issue - or subscribers can click here. To subscribe and never miss a big industry story click here.