'It's a win for us when we write something really popular': Bring Me The Horizon talk Amo as they chase first No.1 album 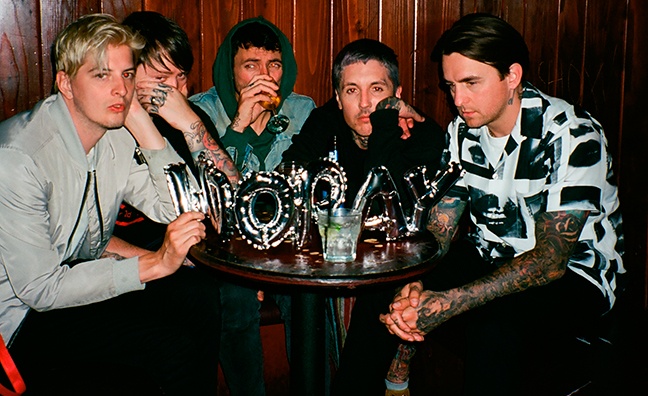 Bring Me The Horizon could score their first UK No.1 today, with sixth album Amo (RCA) leading The Greatest Showman Original Soundtrack (Atlantic) in the midweeks.

That would be a significant moment for UK rock in the streaming age, and the band also looks set for a string of impressive international chart entries, even if they’re likely to miss out on the US top spot to the Backstreet Boys. They’re also gunning for Grammys glory next week with a nomination for Best Rock Song.

Matt Ash, director at BMTH’s management company Raw Power, told Music Week: “Our goal from the beginning has been to have a No.1 record with Amo. If we were not living in such a changing landscape it would probably be an easier call to make, but that’s always been our goal and, if we get to No.1, that’s fantastic. We know we’ve got an album that’s got a lot of depth and is going to keep us on tour and pushing this on for the next 18-24 months.”

Amo – which features collaborations with Grimes and beatboxer Rahzel – broadens the band’s sound significantly, which Ash said has helped open up new avenues for the band.

“At this point, 14 years into their career, we’re actually discovering a lot of firsts,” he said. “It was their first time on national TV in the UK on Sunday Brunch, which was an awesome thing to do. It’s not something we’ve engineered, it’s the natural point in their career to focus on things like that. We’re excited, because we have the core fanbase which has grown with the band and now we’re looking to appeal to new people. We’ve been appearing on playlists that we’ve never been on before which is super-exciting.”

Bring Me The Horizon appeared on the front cover of Music Week last year and we sat down with Oli Sykes and Jordan Fish to talk Grimes, streaming and why they don’t want to be as big as Coldplay…

Did you set out to push rock’s boundaries with this record?

Oli Sykes: “Definitely. When we were writing [2015 album] That’s The Spirit we were all like, ‘This is mental, this album’s crazy’. It felt cutting edge and quite bold. But then we released it, it did well and was getting on the radio, and we took a step back and said, ‘It’s not as out there as we thought’. But you have to write a record like that to do a record like we’ve done this time. As we’ve progressed as songwriters, for us it’s a win when we can write something really popular. We’re proud that we’re developing and able to do what we’re doing.”

Jordan Fish: “This time I don’t feel we needed to prove that we can write big songs. There are a bunch of big songs on this album, but there are places where we could push it a bit more. We don’t have to be concerned about [whether] the song’s too long, or really electronic or weird. It freed us up to do what we want with the album.”

OS: “That is one positive now that everything’s just streaming; you don’t have to convince someone to buy your whole album, because people are going to listen to it on streaming, and if they don’t like a song they can skip it. We wanted to write music that would excite us if were a fan of our band. When you’re a fan, you appreciate the singles, but [your favourites are] usually where the band’s gone deep and done exactly what they wanted to do and done it for however long. We wanted to make more of those songs.”

Even when people think they want you to sound the same, they don’t. It usually doesn’t go down that well when someone tries to recreate what they did before

Oli Sykes, Bring Me The Horizon

Did you worry about the reaction of the fans to the new sound?

OS: “If you’re a true fan of a band you go on that journey with them. You’re always going to see people who are stuck in the past and just want you to sound like one album, but what can you do? You can’t please everyone.”

JF: “A lot of the artists I like have changed constantly throughout their career. I wouldn’t ever compare us to Radiohead but a lot of people would have said, ‘I prefer their old stuff, The Bends’. But I don’t like the old stuff, I like them from when they went electronic onwards.”

OS: “When you can have a debate about a band like that it shows a real history and something good and you’d rather that than the same crap over and over. Even when people think they want you to sound the same, they don’t. It usually doesn’t go down that well when someone tries to recreate what they did before. We’d be lying if we didn’t say that we’ve all been thinking, ‘Fucking hell, what are people going to think of this album?’ because you just do. But we’ve already won in a way; we’ve made an album that we’re absolutely over the moon about, that we feel smashes the record before it.”

How did you get Grimes on the record?

OS: “We saw an NME interview where she said she liked our band a few years ago. We knew we wanted a couple of guests on this album, because we haven’t done it for the last few albums.”

JF: “She was top of our list. We had a shortlist of people we thought would be appropriate and she was the one where we were like, ‘We’re not going to get her but that would be ideal’.”

OS: “My wife’s obsessed with her and she was like, ‘She’s not going to do it, she doesn’t do collaborations’, so when it came through she was like, ‘Christ’. Grimes said she listened to 30 seconds of [Nihilist Blues] and was like, ‘Yes, get me on this’. It might sound cheesy but just her acceptance of the track, when she gets people asking her to collab all the time, we were buzzing off it.”

You’re a global priority for Sony. Is it important to you that you become one of the biggest rock bands in the world?

JF: “We’d rather be the kind of band we like, like Nine Inch Nails where they just do their own thing, play whatever size venue they play and their career is based on doing what they want. That’s the kind of thing we aspire to, more than, ‘Can we sell out a huge arena tour?’ or, ‘Can we be as big as Coldplay?’. That’s not really our motivation. When we do an album, we’re still writing for us.”

OS: “It’s like curating a day at APE [Bring Me The Horizon headline on May 31]. Isn’t it better for us to be doing that [than headlining a bigger festival], because that’s what we actually want and like? What’s more important to us: being the biggest band or being proud of our band?”