'It was a perfect storm': The Killers' guitarist Dave Keuning talks going solo 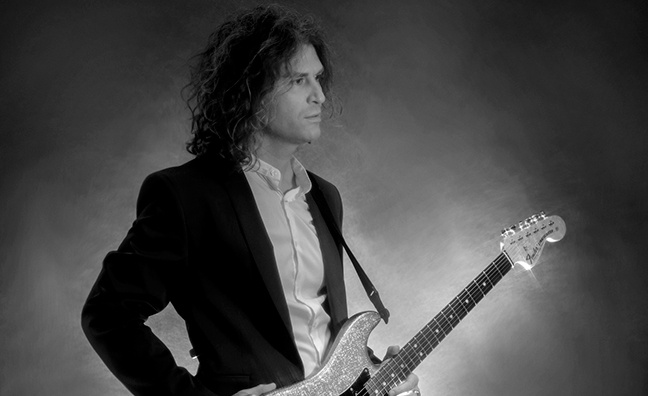 The Killers' guitarist Dave Keuning has discussed his solo career, upcoming UK tour and his future with the multi-platinum band in an interview with Music Week.

Keuning, who stepped away from touring with the Las Vegas rockers in 2017, released his debut solo LP Prismism via Thirty Tigers on January 25.

"I have high hopes, but any outcome is fine," said Keuning. "I'm having a lot of fun just doing my own thing and in this project I'm able to make my own schedule, so I can't complain about that. I'm just happy to make music and finally get my ideas out there instead of being on a shelf, not being heard.

"Regardless of the results, I'm always going to be recording more of my own stuff now and playing shows, even if they're to 20 people! If The Killers want me to write songs for them I'll try my best to do that, but I'm sure I'm always going to have a zillion songs left over for an album. I'm already anxious to record another, so we'll see how long I have to wait before I get to do that."

The 42-year-old previewed the new record with shows at Manchester's Night & Day Cafe and London's Dingwalls in December and returns to the UK this March for an eight-date tour. Tickets go on sale tomorrow (February 1).

"I wish England was closer," said the US-based musician. "I'd be perfectly happy doing just a few American dates and then playing England several times a year. I love the crowds, I love the enthusiasm people have for music here – a lot of older fans that love the music and some young fans – it's a lot of fun. But it's a jaunt for us to get here."

Some of the tracks on Prismism were originally intended for The Killers' 2017 No.1 album Wonderful Wonderful (164,837 sales – OCC).

"There were two that I definitely remember working on with the band," said Keuning. "And then about half a dozen others that those guys probably wouldn't remember because they were such rough demos, they're almost unrecognisable now.

"I'm pretty sure most of these would not have been on a Killers record. They had about 50 songs [for Wonderful Wonderful] and I remember being on a board, trying to narrow it down to the 10 they wanted to work on, so it becomes a hard decision. You've got four guys with their own opinions and this is my only outlet where I can decide everything."

Iowa-born Keuning shed light on his current status with the band, having opted against joining the Wonderful Wonderful tour.

"I am technically part of The Killers," he said. "I wanted to tour a little less so I said, 'I'm sorry I can't do this next tour, or at least I can't do the whole tour, maybe I can do part of it'. But after thinking about it they thought it would be best if it was an all or nothing situation and I was like, 'Well, I can't say yes to all... So I have no choice but to do none of it'."

The guitarist said Killers bassist and fellow founding member Mark Stoermer's decision to stop touring with the band in 2016 was a contributing factor.

"I missed playing with him," admitted Keuning. "It wasn't the same for me and to be honest sometimes I felt guilty about playing, like it was no big deal that he wasn't there. It was a perfect storm and that was maybe one small part of it.

"My son being at home was a pretty big part of it, my own mental health was a small part of it – just because I think I was going crazy being on the road – and even my physical health a teeny bit too. It's not super easy to live the way you want on the road, you're constantly eating badly and changing time zones and you're constantly jet-lagged. It wears on you after a while."

He added: "I didn't do the last [Killers] tour and I'm not doing the next tour. I don't have a crystal ball, so I don't know [beyond that]. I know I'm sending demos to see if any of them stick. Hopefully they'll use a bunch, maybe they'll use none, but I'd love for them to make it on to the next album."

Subscribers can click here to read this week's Hitmakers, in which Keuning revisits the making of The Killers' 2003 classic Mr Brightside.