"It was about capturing a memory": Kacey Musgraves takes Music Week inside her new album Golden Hour 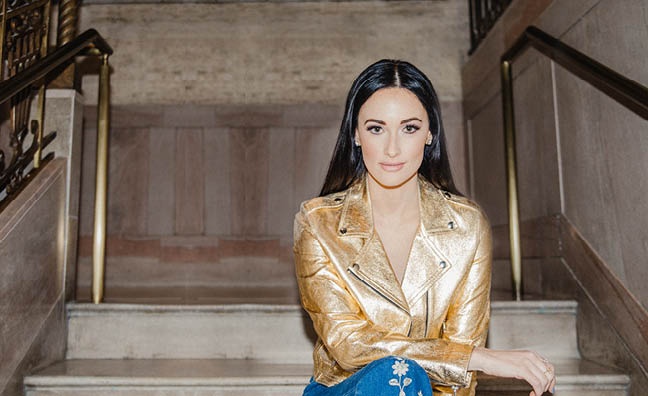 In Musgraves’ recent Music Week cover feature – which was part of our wider Nashville special  – the singer explained how she was hoping Golden Hour would reach people outside of country music while also keeping long-term fans happy. Here, in a previously unseen portion of the interview, Musgraves takes us deeper into how she is reinventing herself this time around.

What questions were you asking yourself going into making Golden Hour?

“I was at a place between albums, between relationships, kind of in this funk for a little bit. I didn’t really know what I wanted to do musically. I really felt like that the last album I made [2015's Pageant Material], the last non-themed album, was super-western and inspired by the late ‘60s, early ‘70s country that I love so much. I went really hard in that direction and I loved it and then I got to dive into the Christmas realm for a minute [2016's A Very Kacey Christmas] and that was really fun for me. I was like, ‘OK, now what? What do I do?’ I just wasn’t really sure. I just knew I wanted to change it up so I started working with two different writers.”

What did collaborating with Ian Fitchuk and Daniel Tashian bring out in your songwriting?

“Oh my gosh, I love Ian and Daniel so much. They’ve always been friends of mine, they know all my friends and they’re well-respected players and writers around town, but we’ve never created anything together. When I set aside time to write I said, ‘OK, this year I’m not going anywhere, I’m just going to write’. One day, Daniel and Ian were like, ‘Why don’t you come over and see how you like writing with us?’ Different combinations can make all the difference in the world, you know? I went over there and the first day we wrote Oh, What A World – I love that one. It was exciting to feel like we stumbled upon a sound that was really fresh for me, it was still an observation on the world in a positive way, and it had country influences, but it also had this futuristic element to it. Where the two met in the middle really inspired me and led to us writing the rest of the album.”

I love fun clothes, seeing the world and meeting people, but it’s not what feeds my soul. I have to have the songwriting power the rest of it

Part of the concept behind the title Golden Hour is that it’s a time when things are seen clearly. In your time between albums did you get a clear reflection on how far you’ve come in your career?

“You have to take time to slow down and just take everything in and create again. To me, getting back to the creation part of things is why I do all of the other stuff. I love fun clothes and seeing the world and meeting people, but it’s not what feeds my soul. I have to have the songwriting and the creation aspect of it to power the rest of it. I had to get to that part again, what drives me. I always feel I have to be working on something, shaping something – whether its designing boots or a song or a little water colour thing I’m working on or learning how to ride my horse and getting better at that. I love the process of shaping something until its where you want it to be.”

Mother is one of the other highlights from Golden Hour. How did that song come about?

“Mother makes me really sad, reflective, melancholy. There’s an aspect of the passage of time, seeing your parents get older, that always really gets to me. Urgh… that kills me. I wrote most of it by myself, I’d say 85/90%, one night when my mom texted me and I was missing her. I wrote it down and then finished the rest of it the next day, but we pondered if we should make it longer into a full song, with multiple choruses - it’s, what, 40 seconds long? A minute long? It's almost like an interlude between songs – a little thought recorded live by the piano. I just feel like Mother and Rainbow, they just don’t need to be perfect. It would kind of ruin something to me about those songs if they tried to be completely perfect and flawless. It was more about capturing the sentiment, and moment and a memory. I had to come to terms with the fact that there are ‘performance flaws’ in some of the lines on those tracks, I can be a bit of a perfectionist against myself. I could sing something 800 times and know that on the 801st time I could sing it better and it would bother me. So I had to come to terms with leaving it as is and letting the moment be heard, not the perfection.”

You mentioned Rainbow too, what inspired that song?

“Rainbow in particular was inspired by something that my horoscope said one day, there’s a certain column that I read quite a bit and she said, ‘You don’t know it, Leo, but there’s a rainbow hanging over your head’. I wrote that down and when I got with Shane [McAnally]  and Natalie [Hemby] I told them about it, and we ended up writing that song. I remember I played that one for my grandmother – my mom’s mom, who passed away several years ago – and she loved that song so much. It was her favourite. When she passed away, Rainbow was played at her funeral and it was always really sad for me to play, I never really did anything with it, but for this album we were looking for that last addition to the album that would make it feel complete. I had the groovy love songs, I had High Horse and attitude with that, but I was missing a moment like Rainbow, so I dusted it off. It’s a five year old song or so, but it ended up working.”

You can watch the lyric/audio videos for Kacey Musgraves' latest single High Horse below.