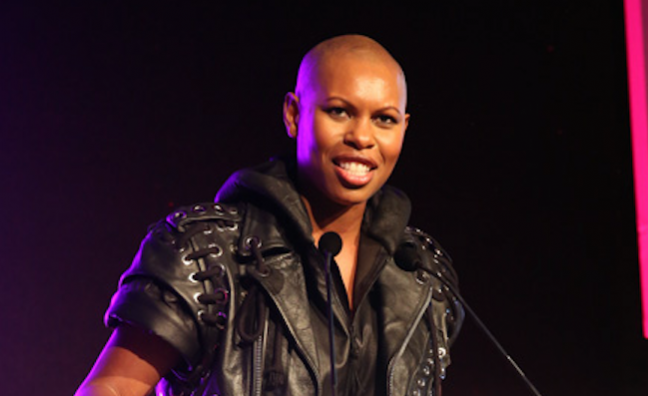 Skunk Anansie singer Skin was the only winner at the Music Week Women In Music Awards 2018 who confessed to shaking on stage.

Emotions were running high all afternoon, but rarely was the atmosphere as intense as during Skin’s speech. Nadine Shah, Mercury-nominated this year, introduced our Inspirational Artist in fittingly passionate fashion: “You’re just cool… as… fuck!”

Reflecting on more years in the business than many in the room, Skin has seen considerable change in the UK music industry, but, tellingly, she revealed she’s still forced to “fight” as much as she ever has been.

The contrast between pin-drop silence and howling appreciation only served to underline the magnificence of Skin’s speech, which you can read in full below.

Along with her fellow winners, Skin is profiled in the new issue of Music Week, out now. Subscribers can read the interview online here. Catch up on the best moments of Women In Music 2018 here. To subscribe and never miss a music biz story, click here.

“Woah! I feel quite nervous and quite emotional. What is it with artists and not preparing a speech? What are we like?

“It’s been a fucking amazing experience being in a room with you, thank you so much for giving me this award. I haven’t got many awards in my career so this is extra special.

“There are so many people to thank, but I’ve got to say a big thank you to my manager Leigh Johnson, a female manager, from literally day one. She discovered me and has been my rock, more like granite, she doesn’t take no prisoners. She’s a very serious, very moralistic manager with a big heart. I’ve never had another manager. Big love to the boys in the band, we’ve been together 25 years next year.

“I was thinking, back in the day, 1992 or ’93, I wanted to be a rock singer and it’s been very hard being me. It’s been very difficult thing being a lead singer of a rock band looking like me and it still is. I have to say it’s been a fight and it will always be a fight. That fight is interesting and that fight drives you and makes you want to work harder. I want to say to any new artists out there, man you’re in for a ride. It’s not going to be easy, it’s not supposed to be easy, it’s the friggin’ music business and you’re women, and some of you are black and some of you are gay like me. You’ve got to keep moving forward, keep striving for everything you want to be. Keep being very, very individual and doing exactly what you want. But take some advice, it ain’t all about you! But keep striving.

“I’ve been involved in lots of things working with kids and that’s what’s inspiring, seeing new kids coming up with fresh ideas, being excited, having energy. You’re like ‘Calm down… get your shit together’. First you have to write a good song. It all comes from that.