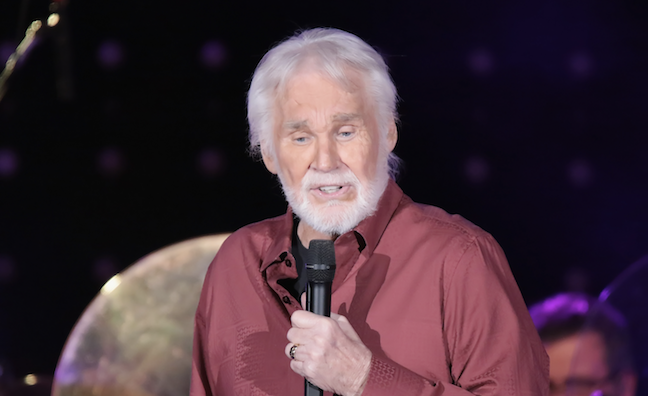 Dolly Parton led tributes to Kenny Rogers over the weekend after the country musician passed away aged 81.

Rogers’ family said that he "passed away peacefully at home from natural causes". They will hold a private service with a public celebration set for after restrictions around coronavirus are lifted.

The singer won Grammys for Male Country Vocal Performance in 1978 and 1980 and was the winner in the Country Collaboration With Vocals Category in 1988.

According to Official Charts Company data, Rogers’ biggest selling UK single is The Gambler, which reached No.22 and has 531,789 sales to date. His Daytime Friends – Very Best Of collection has 158,102 sales.

Rogers other hits include Lady, Lucille and She Believes In Me. He was inducted into the Country Music Hall Of Fame and won six CMA Awards, including the Willie Nelson Lifetime Achievement Award in 2013.

In a video posted on Twitter, Parton said, “Above all the music and success, I loved him as a wonderful man and a true friend”.

Rogers collaborated with Parton on the classic Islands In The Stream single, which has 677,997 UK sales to date and 111,788,727 streams on Spotify. The track is in line to return to the charts this week.

See a selection of tributes to Rogers below.

You never know how much you love somebody until they’re gone. I’ve had so many wonderful years and wonderful times with my friend Kenny, but above all the music and the success I loved him as a wonderful man and a true friend. pic.twitter.com/hIQLIvt8pr

THANK YOU KENNY ROGERS-
for decades of genre bending music and collaborations - for making music that travelled the globe .. and songs that became common threads for people from all walks of life !! GO REST HIGH BROTHER. With love and deep appreciation . KU

I had the huge honor of producing songs with this American Giant. He was kind, funny and one of the greatest conveyers of a lyric in the history of music. The world will miss you forever. Thank you for the decades of incredible music! You define a generation. #RIPKennyRogers pic.twitter.com/zoi699yeFx

Today country music lost a legend. I had the honor of singing with @_KennyRogers at the 2013 CMA’s. Just watch everybody singing along in the audience. What joy he brought to the world. pic.twitter.com/J9lFOsbVfy

I never even met @_KennyRogers but his passing breaks my heart. His music is a large part of the soundtrack of my life. Heaven just got one of the greatest musicians and singers this planet ever heard. Rest easy and thank you for sharing your gift with us @_KennyRogers pic.twitter.com/VU5kuOxADU

Rest In Peace Kenny Rogers. We loved you. #kennyrogers #sweetmusicman

What a great man. You will he missed #kennyrogers . This was from 2009 when @ladyantebellum got the opportunity to open up a show in Switzerland for Kenny. He really opened the door for us and touring internationally.

RIP @_KennyRogers Thanks for all the music and doing the best version of “when you love someone”, (and of course “the gambler” which is one of the best songs ever). Peace #KennyRogers