LadBaby land third Christmas No.1 with fastest-selling single of 2020 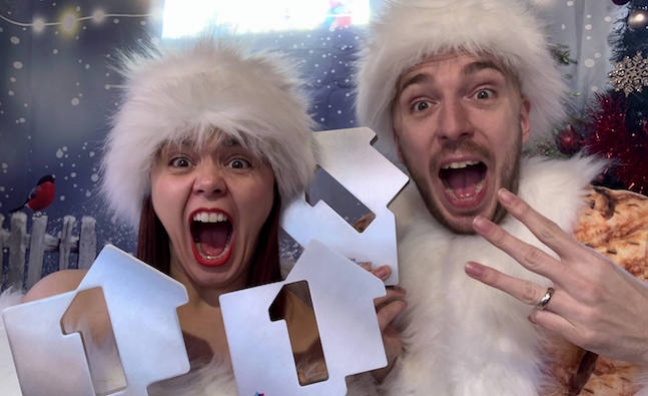 LadBaby have done it again.

YouTubers Mark and Roxanne Hoyle have scored a third consecutive Christmas No.1. The vast majority of their sales came from downloads, ensuring that the single will raise a substantial sum for food bank charity The Trussell Trust.

Despite competition from festive classics by Mariah Carey, Wham! and The Pogues feat. Kirsty MacColl, as well as new Christmas covers by Jess Glynne and Justin Bieber, LadBaby’s Don’t Stop Me Eatin’ was out in front all week.

The song, including a new version with Ronan Keating released earlier this week, maintained its momentum in their quest for the festive hat-trick. It is officially the fastest-selling single of 2020.

Ladbaby have now matched a record jointly held by The Beatles and Spice Girls – the only other acts who can lay claim to a trio of consecutive Christmas No.1s.

The reworking of Journey’s Don’t Stop Believin’ reached No.1 on Christmas Day with the year’s biggest weekly sale (157,733), according to the Official Charts Company. Don’t Stop Me Eatin’ was released by artist services company Frtyfve.

The year’s previous biggest weekly sale was for Billie Eilish’s No Time To Day (90,488) in February, although Mariah Carey surpassed Eilish’s week one streaming total this month when All I Want For Christmas Is You finally reached No.1. The OCC’s ACR rules require catalogue tracks to stream double the amount of new singles to register the same number of chart ‘sales’.

A late challenge by The Kunts’ 56-second protest song Boris Johnson Is A Fucking C**t failed to pose a real threat to LadBaby. It debuted at No.5.

Paul McCartney secured the Christmas No. 1 album and his first solo chart-topper in more than three decades. McCartney III (EMI) debuted at the summit with sales of 33,079.

Martin Talbot, chief executive, Official Charts Company, said: “Many congratulations to LadBaby and Paul McCartney, the champions of Christmas 2020 in the Official Charts. LadBaby’s achievement in matching the records of The Beatles and Spice Girls, not to mention the staggering sales and money raised, is nothing short of incredible – and it is great to have a national treasure like Sir Paul McCartney on top of the Official Albums Chart at Christmas, after a gap of more than 30 years. The two successes are a perfect summary of all that is special about the UK’s Official Charts.”