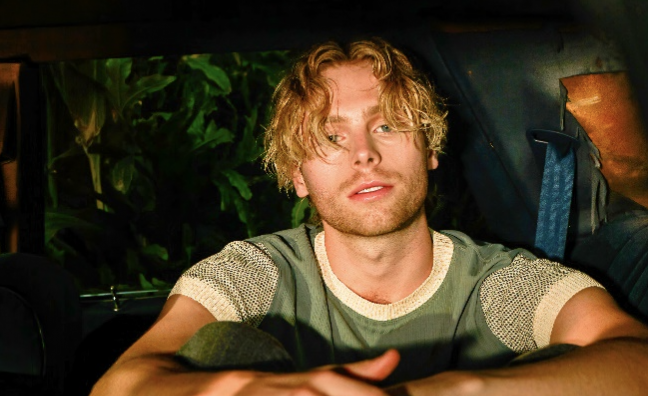 After a year of postponed world tours and never-ending lockdowns, 5 Seconds Of Summer frontman Luke Hemmings took to finding solace in what he loves most, writing music. From that came a deep dive into the last 10 years, resulting in his expansive debut record When Facing The Things We Turn Away From, which came out earlier this month.

The album hit the Top 75 in its first week of release this month; the vinyl release is due on September 17. Lead single Starting Line was an instant hit with fans, and has racked up more than 8.5 million Spotify streams and two million views on YouTube.

Music Week caught up with Luke Hemmings to find out what it was like working on his first solo record with producer Sammy Witte, who worked on Harry Styles’ Fine Line, and to learn what’s next for 5SOS…

What was it like working with Sammy Witte on When Facing The Things We Turn Away From?
“I needed someone to tie it all together and there were a few people that came up through a friend. They said, ‘You can also try Sammy Witte’, and I'd never met him before. I was like, ‘OK, cool, I haven’t seen anyone in three months, put me in with someone that I'm just going to get along with.’ [Laughs]. And the first day I first met him, obviously it's really awkward because neither of us had seen humans in months, but we wrote a great song, and we wrote the next day, and same thing again the next day. I was like, ‘This is rad’, and it just expanded into this year-long relationship. He was really, really fucking cool. He's so talented and so passionate, and just from the get-go, we understood what it was going to be and it just kept expanding and becoming a bigger thing.”

Your band has a legion of fans, but what can people expect from listening to your debut solo record?
“I definitely know that if you have any sort of interest in myself as a person, this is a deep deep dive into that. All the sounds and the sonics have just been tortured over, every sound, every mix, every [bit of] production has been combed over several times. And, lyrically, it's super-important and super-special. I don't know, I just love it. I poured everything into it. So I hope people like it. I'm really proud of it. So I hope everyone digs it.”

Will 5 Seconds of Summer go on hiatus while you do your solo music?
“We actually are finishing an album right now, so I've been in the studio with the band. We're feeling good. I didn't really see anyone [when the pandemic hit], I didn't see the band for a while. That's kind of where a big chunk of my album came from. But yeah, we've been working on a new album as well.”

What was it like to beat Dua Lipa to No.1 in the UK with the band’s last album Calm?
“It felt good. I think Dua's very talented and it’s pretty crazy that we have such an amazing fanbase that allowed us to be at that point, but it was great. I love that album and I'm glad people enjoyed it enough to get it to No.1.”

Has the success of Calm changed the way you and the band have approached this next album?
“No, honestly, everything got turned on its head with making music and the way we operate as a band. It's not even beating Dua and it's so crazy to say ‘beating’, like, it's all music. [Laughs] All of that stuff aside, it's about all of us having time to be at home with loved ones – obviously we can't go into Australia which is a bummer – and being at home in one place. It's a different level of calmness for everyone, in our band anyway, and we're very lucky that we could stay home, make music and have that outlet. I don't think that in particular has changed it. We just make music that we love.”

Finally, what did the band think of your album, and are you planning to release more solo music in the future?
“It's a place I will come back to every however many years. I don't know when it will be, I think it'll be longer between [solo records] than the band's album cycles would be, but I think it's a place that I can come back to and unload a bunch of creativity and feelings. [Laughs]. It's a nice little separate place and they were really supportive. The band loved it. I think it's interesting to play music that you've made to the people that you usually would make music with. It’s the same when Ashton played me his stuff, it was like, OK, this is super-rad, and not what I would do’ and he said the same thing to me. It's interesting, because we've been friends for so long, there's a level of respect, support and love that's really amazing to have and to see. They're legends.”