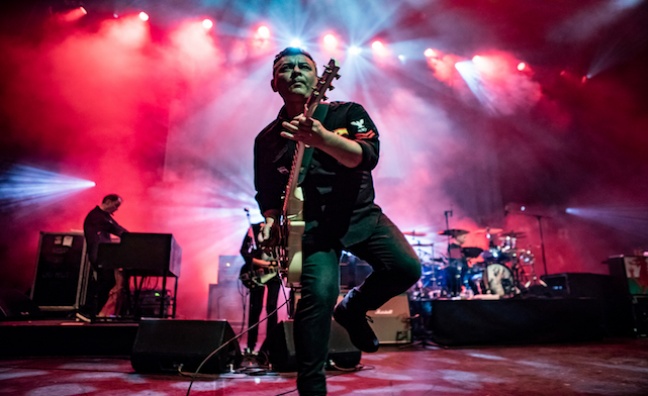 Manic Street Preachers have announced a 20th year collector's edition and tour of their BRIT Award-winning fifth album, This Is My Truth Tell Me Yours.

Released as a deluxe 3CD box set, double vinyl edition and digital package, the album will come out via Columbia/Sony on December 7. It contains unheard demos and live rehearsal recordings as well as remixes by Massive Attack, David Holmes and Mogwai, among others.

The artwork features many unseen photographs by long term collaborator Mitch Ikeda including a different album cover from the original session on Black Rock Sands near Porthmadog in Wales.

Speaking to Music Week back in March, Manics bassist Nicky Wire said: “It’s a really classy album; kind of luxurious and expensive. It still sounds unbelievably well recorded and there’s a lot of depth to the album. Obviously it’s our biggest seller and it’s quite a difficult album to sell that many with, so we look back on it with a lot of pride.”

The band will also tour the album in full next year, playing intimate venues over the UK alongside other hits and rarities, and hope to announce a special one-off gig in Wales in the next few months. Support on all dates comes from Gwenno.

The Manics' only No.1 LP to date, This Is My Truth... won Best Album at the 1999 BRIT Awards and features the band's first chart-topping single, 1998's If You Tolerate This Your Children Will Be Next. It has sold more than five million copies worldwide and has sales of 1,053,540 in the UK so far, according to the Official Charts Company.

Tickets for their 2019 UK tour go on sale on Friday (October 26). Dates are as follows: