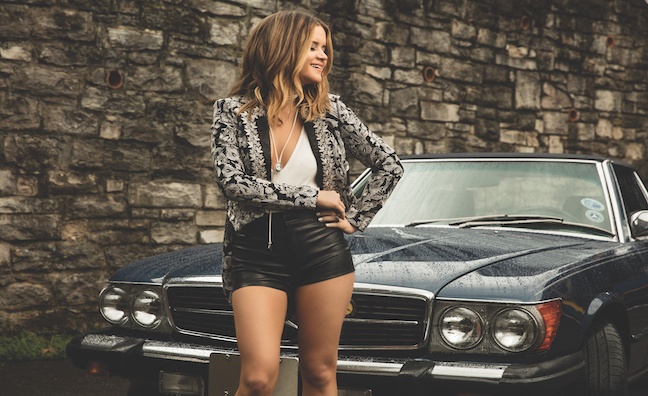 In the new issue of Music Week, rising country star Maren Morris reveals her journey from budding Texas teen songstress to Nashville songwriter to Grammy winning artist. Ahead of her eagerly anticipated return to Country 2 Country Festival this weekend, we spoke to her about how she’s handling fame, the music business, and negotiating the competing demands of being both a songwriter and artist during the making of her 2016 major label debut, Hero.

Have you managed to get your head around the fact that you’re officially a Grammy winner yet?
“I think I’ve finally processed a little bit, I think I had a delayed reaction to a lot of things. It’s a process coming down from all the adrenaline and, yeah, letting yourself believe that everything that week actually happened in reality. I have a pretty good head on my shoulders; I have good family and friends that keep me grounded and self-aware so I think as crazy as this past year’s been, I’ve got a pretty good handle on it so far.”

How did it feel to be in that room accepting the award Best Country Solo Performance?
“I feel like lightning sort of struck because I was just sitting there, really, as a fan. I know I was nominated for a few things, but I was just excited to be there with my mom, who was my date – that was the first time she ever got a really good seat at an awards show. I wasn’t really nervous about the outcome of any of the awards because I just don’t think you can go in expecting anything, especially as a new artist. I would be lying if I said wasn’t wanting to win any of them – I certainly wanted to walk away with something, but I was just having a good time and when they called my name on the stage I just felt so validated.”

How would you describe your career journey as a whole up until that point?
“Fast, but not overnight. I self-released three albums back in Texas, the first one came out when I was 14 so you can imagine the road that I’ve been on. Something happened in the blink of an eye, but a lot of it is down to time meeting perseverance. A lot of it is just working your ass off and being humble and fine-tuning your craft, finding your sound, being original – all of that cultivates and meets with great timing. Then, once the ball starts rolling, you just have to hold on for dear life.”

At 22 you left Texas and moved to Nashville, which seems to be a critical turning point in your career. Why did you make that move?
“I just think, as a young woman, I was ready to live somewhere else. I’d never lived outside of Texas, I love Texas – there’s such a pride coming from that state – but I just wanted to see a different part of the world. Obviously, I’d been a country music lover since I was a kid and I wanted to see the hub of where all these songs were coming from because I’d grown up loving songwriters like Kris Kristofferson and Merle Haggard, and Dolly Parton’s a huge song writing hero of mine. I wanted to go where all this stuff was being created so I moved. I didn’t really have any aspirations to make a record again, I just wanted to become a great songwriter and learn from the greatest songwriters in the world.”

Did you ever consider quitting as a solo artist?
“I just wanted to be behind the scenes at that point and write songs for other people. That was the dream because here [in Nashville] it is a day job: you go in, write a song a publisher has set you up with another writer for, and sometimes another artist will record it and sometimes it gets on the radio. The dream was just to be a writer that could stay at home and have a family and just be local and still be able to create every day. That still is an amazing job in my mind. But after a couple of years doing that – and I’d had some success with my songs being recorded by Tim McGraw, Kelly Clarkson and Brothers Osborne – I think after singing on all my own demos everyone was saying, Wow you have a great voice and point of view in your songs, are you sure you don’t want to try the artist thing? I was like, No I don’t want to do that, I want to write songs for other people and let them do the work.”

How instrumental was Tim McGraw recording your song Last Turn Home in 2014 in giving you the confidence to become an artist again?

“Well, at the time when Tim recorded my song, I wasn’t in the headspace to make an album. I was still just like, Oh wow, I have that validation from having a legendary artist in this genre record a song of mine, I need to keep doing this and get other cuts from other artists. I didn’t really have the light bulb moment to make my own record for another two years or so. But it’s a huge honour and it sort of solidifies your place in this town when you can say Tim McGraw likes my stuff and he recorded it. It just gets you into rooms with even better writers and bigger writers. I just stayed on that course. The first couple songs of my record started to take shape, I recorded a song in the really early stages of Hero called I Wish I Was, and it was really one of the first songs I recorded for myself. I didn’t think anyone else would record it, but it was such a personal song to me and came from a really painful place. I was going through a break up at the time and that song really pushed forward the point of view. I just couldn’t deny it any more that I was onto something. At the time I didn’t think any major labels would be sniffing after it. I was just recording these songs handfuls at a time, and it really wasn’t until I wrote My Church with my friend [Michael] Busbee that a switch flipped in my mind about the artist concept. I had never had that powerful, gut feeling about a song. I obviously like all the songs I write, but that one was really special right off the bat for me. From My Church on a switch just flipped like, OK, every song I write from now on - is this for me or is this for someone else?”

My Church has been a huge hit for you in America. Why do you think that song connected with so many people?
“My take on it in becoming so accessible and relatable to people is that the one thing that everyone in this world can agree on is that music is healing and brings people together. In a day and age now - post-election – [with] all the crazy shit that’s happening over here with our country, there are so many polarising views on what’s going on. If you put a bunch of people in a room with an artist they identify with, and maybe they come from all different walks of life and they approach the topic of politics [differently], for an hour and a half, music at a live show connects us all. My Church encapsulates that sentiment.”

You had another big hit single with 80s Mercedes – a song that broadcasts a real pop sensibility in your music. Do you want to be successful outside of country?
“In my heart of hearts, I’m from Texas, I grew up on classic country music listening to the Dixie Chicks and Shania Twain and Kenny Chesney – all the modern day people I was really influenced by as a kid - and I also grew up on a lot of Johnny Cash. I think at the root of it all I’ll always have that heartbeat for country music. But you know, I grew up on everything, I’m the product of the radio that I listened to which was a lot of pop stations. I’m a 90s kid, I grew up on Spice Girls and I love the Cardigans. The artist I always looked up to was Sheryl Crow – she’s just Sheryl Crow you don’t think of her as pop star Sheryl Crow, or rock star or country sweetheart. It’s just her. I hope that people look at me that way, where it’s just about the music and whether it makes you feel something.”