Meet the 10 new artists changing the game for UK rap 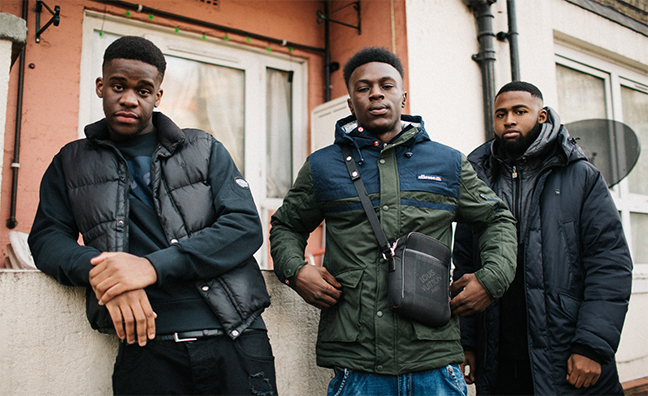 Right now, the UK rap scene is hotter than it's been in years, with new artists emerging from all corners of the country. Streaming has opened even up and coming acts to a vast potential audiences, and with big hitters like Stormzy and J Hus taking their favourite stars of the future on tour, 2017 is proving a good year to get noticed.

Other than their obvious star quality, the one thing uniting these 10 artists is their magpie approach to genre. Even a cursory listen as you scroll through the list will tell you that much. Of course, we’d recommend you spend more time with these 10, including London's Belly Squad (pictured above), than that.

Innovative production, watertight lyrics, character, bags of personality and star quality should ensure you do…

The East London MC is currently positioned as the UK’s most likely to. So far this year, he’s hit No.21 with a feature on fellow up-and-comer Yungen’s Bestie, and made waves with a savvy remix of Ed Sheeran’s Shape Of You, the loose, dancehall flavour of which won’t have surprised anyone who clocked 2016 singles Should’ve Known Better and Fine Wine. Sometimes slow, sometimes fast, Bane’s sound is all about melody, and boxfresh single Rihanna is the best thing he’s released yet. It will sound great blaring from open car windows this summer.

Barely into their twenties, this Birmingham duo have shifted from grimy beginnings to a highly addictive sound they’re calling Afrobean, a name they dreamt up to reflect their mix of Afrobeats with their Caribbean heritage. Just signed to Sony affiliate Pitched Up, they’re turning heads across the industry with current single No Don, which also exists in remix form featuring Chip and Not3s. But for an intro to their wild, fluorescent sound look no further than Birmingham (Anthem), a hands-in-the-air tribute to the 0121 area. Having toured with J Hus this year, they’re well into their stride.

After appearing with JME and Stormzy on Tinie Tempah’s Been The Man in 2015, Ms Banks (real name Tyra Banks, believe it or not) has only been going in one direction of late. Back in April, i-D magazine called the South-East London MC “one of the most important women in UK rap” and, after a year that’s seen the release of totemic singles Get Loose, OMG, Vibez and a feature on Serena Kern’s Drop Top, it’s hard to argue. Dig further into her fiery, aggressive flow by searching for her Fire In The Booth BBC Radio 1Xtra session from 2016.

Endorsement from Skepta is not to be sniffed at, and that’s precisely what Bossman Birdie got when the Boy Better Know MC lent lo-fi production to his recent single, Walk The Walk. In fact, the Bossman has been kicking around with Skepta since childhood, collaborating on Duppy (Doin’ It Again) in 2006. Now signed to Island, the Tottenham MC is looking to throw his weight around like never before.

Fusing hip-hop, dancehall, grime and R&B, Not3s is responsible for one of the finest songs about a taxi ride of recent years. Released in November 2016 and written in a studio near Westfield shopping centre in Stratford, East London, Addison Lee flew out of the blocks, turning viral due to a combination of Instagram clips and heavy radio play from Radio 1 and Captial Xtra. The remixes (from Tom Zanetti, Tazer and more) are worth a look too. It has 199,687 combined sales to date according to the Official Charts Company, while his debut EP Take Not3s is coming via Relentless in the near future.

Perhaps the most energetic example of boundless genre-blending in the UK right now, Belly Squad are building some serious buzz. Aged 18, 19 and 20 and from South and East London, Max, Ty and Ross have just dropped their Lifestyle single. Produced by a 16-year-old talent named TK, it marks the onset of what they’re calling #Bellyseason. Put simply, it’s a huge track, throwing further weight behind the praise the trio have received from publications including Fact, Crack and The Fader. Belly Squad flit between grime, rap and Afrobeats with bags of character.

The Croydon rapper has collaborated with Not3s and Belly Squad and already has an impressive body of work - 2016 single Mad About Bars and EPs Hardy Season and The Hollywood EP - to his name. Crisp and low-slung, latest single Unsigned crystallises the clear talent of a young man who, in April, was awarded a First in his dissertation the day after playing his sold out debut London show.

An East London MC known as ‘The Golden Boy’, Kojo Funds can be found guesting alongside Donae’o on Wretch 32’s new track, Whistle. Dressing up explicit lyrics with lush, heavy production, he was also spotted in the studio with Young Thug earlier this year and has beefed with J Hus.  Trawl through his SoundCloud or Spotify pages for such gems as Dun Talkin’ (feat. Abra Cadabra), Robbery, Warning and Fear No One.

The Brixton rap crew appeared on XL Recordings’ New Gen compilation earlier this year and followed up with the 12-track Glorious Twelfth this summer. Aggression, energy and jeopardy define their combination of drill beats and rapid-fire bars, while their records crackle with excitement. Dimzy, LD, Monkey, ASAP and Liquez had their debut UK tour pulled after police intervention, but have been on the road both at home and in Europe this summer. See them at Reading & Leeds this weekend, and Bestival in September.

Young T & Bugsey spent their square-eyed teenage years watching Snoop Dogg, Pharrell et al on MTV Base at home in Nottingham. Then, a chance meeting with Stormzy in 2015 led to friendship, with the rapper bringing the pair out at his Nottingham show in April to perform Gangland. The track, which also features Belly Squad, showcases their bassy beats and nimble vocal interplay, proving they’ve made big strides since 2016 breakouts Glistenin’ and No Mickey Mouse Ting.