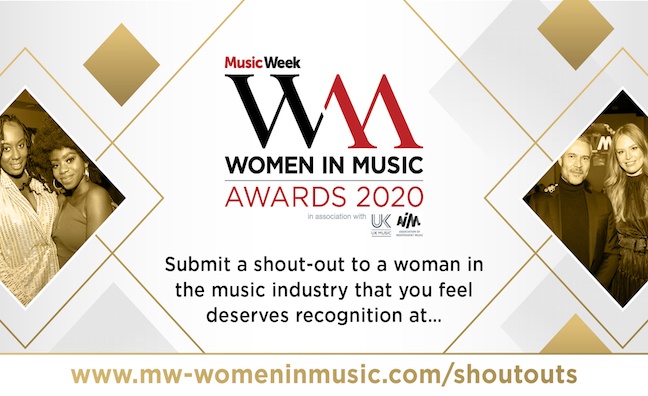 There might have been no Music Week Women In Music Awards ceremony this year, but there has never been a better time to celebrate the brilliant work of female executives across the industry.

As well as presenting our expanded 2020 Roll Of Honour, we invited Music Week readers to submit shout-outs for a host of others who deserve recognition for their achievements and efforts over the past 12 immensely challenging months - a number of whom appear in this week's magazine.

Here, we unveil part one in our list of the execs you chose to praise in front of the whole business...

"I'd like to shout-out Áine for her amazing producing skills and being a leader in the first 100% female-made album that Universal Production Music has released."

"On top of wrangling post production for our broadcast partners, Alice has a list of exciting soon-to-be-released productions including Beethoven re-composed, Warm Folk and, Classical Hooks and a Vivaldi album."

"I would like to shout out the amazing and inspirational Amy Field. She is not only a great events and sponsorship manager, but also is a great project manager where she has the gift of coming up with ideas that end up impacting the music industry in such a influential and positive way."

"I want to shout out Anique Cox for her incredible efforts in leading the Bree Runway campaign. Anique’s hard work, excellent organisation and creative strategy has enabled a flawless roll out leading to career high stats for the artist and inspiring growth."

"Highlighting Atlanta's achievements this year including - a platinum Top 10 hit with Ella Henderson, spearheading the launch of our new label Truth Records. All whilst working platinum and gold records with Becky Hill including; Lose Control, and top 20 Heaven On My Mind. Rising Star Award winner in the making!"

"Brooke is an exceptional marketing exec with a rare knack for combining creativity and the ability to create demand with commercial nous and ambition, while driving a team towards a shared goal."

Caroline started in her role at AWAL during lockdown with all of our teams working from home, and despite the challenges that this has presented, she has managed to deliver key priorities including the recent Facebook video launch, working in collaboration across multiple tech and operational teams globally.

Cassie's project management for our Lucky7 label project with Bauer Media has been really lucky for us and it is the seventh label Cassie's helped us launch!

"Charley, despite the challenges of working from home more than in the office since joining EMIPM, has grabbed the opportunity with both hands and built her own client base through exceptional client pitches, whilst remaining a positive ray of sunshine for the rest of the team to bask in."

"One of the hardest working artist managers out there. This year she’s added Grammy Award-winning artist Foxes to her day-to-day roster with Vicky Dowdall/VDM. Nina Nesbitt also surpassed half a billion streams, crushing it with Oz on her debut releases, and being imperative to the launch of Truth Records! Boss woman!"

"Claire is responsible for ensuring that 145,500 composers, songwriters and publishers get the best possible service from PRS for Music. Her leadership is vital in continuously developing the membership experience for the better and saw a 60% year-on-year increase in women joining the organisation as professional songwriters and composers in 2019."

"Colette Goodfellow is integral to the success of her writers and artists, during lockdown initiated sending notes to UMPG UK writers encouraging remote writing sessions, beats for artists and writers, toplines for producers and to consider revisiting old tracks, alongside championing her songwriters, notably recent signings Rina Sawayama and Griff."

"For the Working Men's Club debut album campaign. Her perserverance and tenacity have enabled the band to become one of the first with a profitable livestream ticket model, and her efforts have helped one of the most exciting live bands find their audience through other avenues whilst touring was impossible."

"Shout out to Sarah Gates at Everybody's Management for all her hard work on Jack Garratt's second album campaign Love, Death & Dancing."

"These wonderful women have produced music for Boots, Colgate and many more. In addition, during the pandemic they also contributed to a song to thank the NHS and Key workers. They also work incredibly hard to fight a stigma of 'mostly producers are men'. So I believe they deserve the recognition."

"Elizabeth Troughton was responsible for getting Lewis Capaldi and Jamie N Commons to write together alongside Jamie Hartman which led to the enormous Ivor-nominated single Hold Me While You Wait. She has a relentless drive and commitment on behalf of her writers - this is the first of many successes."

"Emma joined sync in 2014 and works on film and radio advertising. Achievements include, securing multiple songs in Baby Driver, Bridget Jones 3 and Trainspotting 2. Now promoted to sync manager due to exceptional performance and work ethic. Consistently going above and beyond, a shining example of a team player."

"Emma is one of the most dedicated managers out there, handling the detail of day to day management with aplomb for Gary Barlow and Take That in their record breaking 2019 whilst managing emerging acts Dan Caplen and Emily Burns and being a core member of the YMU Music team."

"Within two short years Emma has gone from a marketing assistant to leading on some of our biggest campaigns, including guiding Fontaines DC through a chart battle with Taylor Swift earlier this year. Congrats Emma! Here's to many more."

"Ester Krausova lead the incredible business intelligence team in providing a world of data analytics tools to UMPG staff globally. Ester leads from the front, inspiring all of those around her and is a shining example of what hard work, endeavour can achieve in music."

"To Fay and Afryea, A big thank you for all your hard work and dedication setting up the UMG task force! We’re all super proud. From all your friends at EMI xx."

"Fed is a hard worker and a skilled marketing manager who is full of great ideas. Recently her idea for Backstage Tours at The O2 has been picked up and developed into an amazing series of tours for fans to get the rockstar experience behind the scenes."

"These women have tirelessly pushed for more womxn in drum & bass. From events to workshops, to successfully creating a mentorship programme with Ram, V Recordings, Shogun, Critical and Function, they have collectively created a community to address gender imbalance which supports new/rising and established female and non-binary talent."