'No one gets it right first time': Skunk Anansie singer Skin on her 25 years in rock 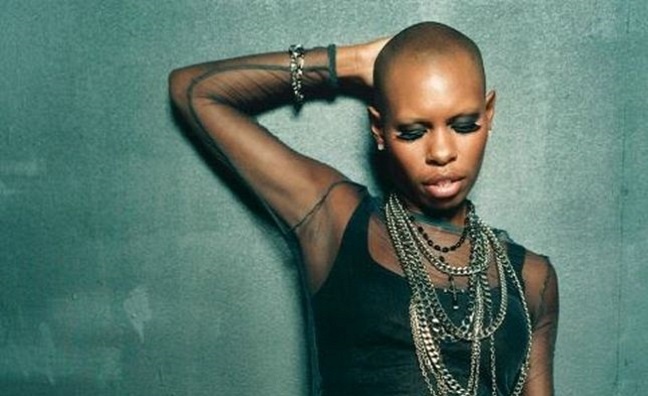 Skunk Anansie frontwoman Skin was the star of the show at the AIM Connected conference on Wednesday.

Interviewed by Music Week editor Mark Sutherland, the iconic singer told plenty of great stories from her career, from turning up for a gig in Arkansas to find the locals were expecting a far right band with a skinhead singer called Skunk Anazi; to being asked not to swear in front of Nelson Mandela when the band played his 80th birthday party (she failed).

But she also had some important points to make about the industry she blazed a trail through in the ‘90s, where she brought some much-needed diversity to a straight, white, male-dominated rock scene.

“If my band was starting right now, the fact that you’ve got a gay, black, female rock singer would probably mean a No.1 album,” she said. “But back in those days, it was very negative. We had to make sure the songs were there because being really, really good was what got the interest. Our band was like a slap in the face.

“Even now, you’ve got to have good songs,” she added. “It doesn’t matter what race or gender you are, start with great material and all those other things are just interesting things you can talk about in the press. But the people have to feel the songs, that’s the first thing they grab onto. If you haven’t got that, they’ll like you for a minute while you’re trendy, but then it all fades away. The chemistry and ingredients of a band aren’t strong enough on their own.”

After huge success in the ‘90s, Skunk went on hiatus but reformed in 2008. They’ve since made three albums and played some of the biggest shows of their career. But Skin – real name Deborah Dyer – said today’s artists have to be allowed freedom to develop in the internet age.

“There was no social media when we started,” she said. “This mentality we have of not being able to make mistakes, and get things wrong, not being able to discuss valuable things – that’s when you formulate the crux of your band, what you’re going to write about and what you’re going to look like. No one walks in and gets it right first time – and if they do they must be really bloody boring.”

Skin has been hailed by many artists – such as Nadine Shah, who presented her with the Music Week award – as a pivotal figure in rock, but the Skunk frontwoman played down her influence.

“Now I realise that I have a lot of knowledge, like, ‘Actually, I have been around the block, I do know some shit’,” she conceded. “But it’s a pitfall that you can fall into, thinking that you’re all that. It’s much better to put young people in a situation where they can flower rather than you being all like, ‘I’m a legend’. If a girl picks up a guitar because of me, or there are more girls playing rock music because of me, that can only be a good thing. But I don’t think I should get too big-headed about it.”