"Not as many kids pick up guitars... That's something I'd like to change": Ed Sheeran launches new guitar brand 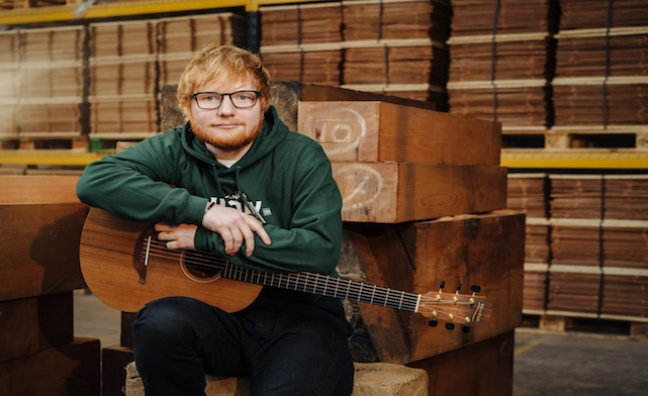 Ed Sheeran has announced a new range of guitars with Northern Ireland guitar makers Lowden christened Sheeran by Lowden. The announcement was made at a private event held Wednesday (January 23 in Anaheim, California.

The Sheeran by Lowden acoustic guitar range features eight individual models across two small body sizes familiar from the Lowden range, known as the S and the Wee Lowden, both of which are played by Ed.

Speaking about the process, Sheeran said: “There are fewer guitar bands and fewer artists using guitars now, and not as many kids picking up guitars. That is something I would like to change by getting these great quality guitars, made in Ireland, into kids’ hands and encouraging them to learn and progress. To be able to work in tandem with a guitar company like Lowden to create a whole different concept has been a really cool experience.”

The partnership between Lowden Guitars and Ed Sheeran is a progression from a long period of collaboration, with Sheeran building a personal collection of Lowden guitars which appear on stage with him over the years, including Lowden’s electric guitar, the GL-10. To accommodate the company’s continued growth, Lowden Guitars has also opened a new bespoke production facility based in County Down, Northern Ireland.

George Lowden said: “We have been honoured over the past years that Ed has chosen to play Lowden guitars both on-stage and in the studio. We are delighted to have established a close ongoing relationship which has borne fruit recently through the birth of Sheeran by Lowden.”

David Ausdahl, managing director, Lowden Guitars, added: “The past year has been an exciting time for Lowden Guitars. In addition to our recent announcement of our bespoke Lowden strings and the addition of four new guitar models to our core range of Lowden guitars, being able to partner with Ed Sheeran to develop and launch the Sheeran by Lowden brand has been a monumental moment within our 45-year history.”

Sheeran guitars by Lowden, will be available to order through select music merchants. Visit www.sheeranguitars.com for more info.

Lowden Guitars will exhibit their latest models including the newly-launched range of Sheeran by Lowden guitars at this year’s NAMM show at the Anaheim Convention Centre, from 24 – 27 January 2019.