Prize giving: The best moments from the Mercury Awards 2017 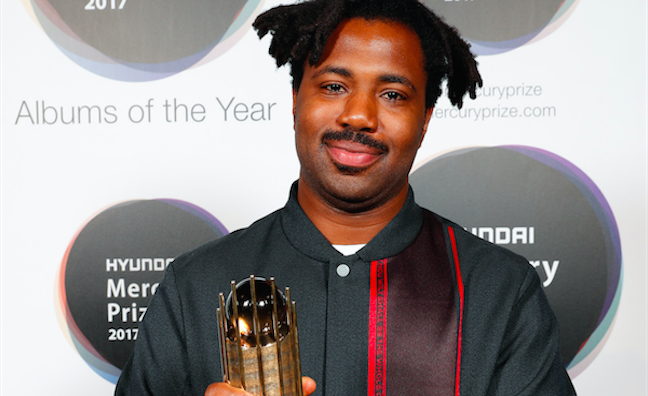 And so it’s over for another year. Sampha has won the 2017 Hyundai Mercury Prize for his debut album Process, and the industry is waking up to gather its thoughts after yet another night of post-Mercury afterparties. Of course, Sampha’s label, Young Turks, hosted their own, and their celebration was well-deserved.

But on a night when last year’s winner, Skepta, turned in a performance that underlined his magnificence, UK music was able to take a long, hard look at itself. The conclusion on the night seemed to be that it's in pretty exciting shape. Kate Tempest drew an impassioned standing ovation, Glass Animals rocked out like nobody was watching and Dinosaur skronked away at one end of the Eventim Apollo’s stage. With all that and more to look back on, Music Week picks apart the best moments of the ceremony.

It wasn’t a vintage indie year for the prize that has previously rewarded Suede, Pulp, Arctic Monkeys and Franz Ferdinand. Yet, while Stormzy, J Hus, Sampha, Kate Tempest et al attracted the lion’s share of pre-show buzz and mid-show excitement, there were two particularly bright spots for those who still love guitars. Firstly, The xx’s opening On Hold managed to get the party started with some real effervescence – probably not a word used in connection with them too often back when they won in 2010. It also prompted large chunks of the audience to exclaim: “When did The xx start dancing?” The Big Moon, meanwhile, threatened to kick off an all-too-rare Mercury moshpit with a version of Cupid that was perfectly poised between controlled menace and all-out mayhem. “I’ve been trying to catch an eye for a lifetime,” sneered Juliette Jackson. Mission accomplished.

If the Mercury Prize was decided just on the performance during the show (it's purely judged on the album), Stormzy would surely have walked away with it. Recreating his Last Supper-style album sleeve for Gang Signs & Prayer, complete with a stained glass window church effect in the Apollo, the Croydon rapper was surrounded by his cohort concealed in black balaclavas - a menacing look that once went down badly with some BBC viewers when Manic Street Preachers did the same thing on Top Of The Pops in the dark days of the IRA. If J Hus was the evening's most charming performer, Stormzy was the showman of the 2017 Hyundai Mercury Prize with his uncompromising rendition of First Things First and a heartfelt Blinded By Your Grace Part 1 that had fans swooning. With the biggest-selling shortlisted artist absent - Ed Sheeran sent his apologies from a US tour - it was left open for the second biggest seller to rule the stage, just as at last month's V Festival. The shout out for Stormzy (and Hus) by last year's winner Skepta during his performance was also a moment of validation.

Speaking of J Hus, the East London rapper pretty much performed the pants off the Eventim Apollo, backing up a solid period since the nominations announcement with a performance that illustrated the personality and wit of his debut Common Sense. “Alright, alright, alright…” he repeated, but this was better than that. When he got to the Did You See part of his two-pronged attack, with its now iconic “Did you see what I done?/Came in a black Benz, left in a white one” line, the cheers threatened to drown him out. But best of all was the smile as he reminded the room of the name of his record. In that moment, there was recognition of the significance of his presence on the shortlist. As the rapper’s manager said to Music Week outside after the show (before posing, alongside Hus, for one of the biggest team photos of the night) “to get here from where we’ve come from is massive”.

When it was announced that 2016’s winner, Skepta, would be performing at the ceremony, there was the notion that perhaps he would steal the thunder from this year’s nominees. Of course, he didn’t, using his performance of a new version of Man – featuring rising star Rex Orange County on guitar – to remind us that albums from Stormzy and J Hus were “out now”. Skepta makes no secret of his support for his fellow artists, and this jerky, immersive showing served to underline how important his mere presence is for UK music at the moment. As the audience reaction showed, just having him in the room meant a lot. His victory in 2016 marked a watershed moment, and Sampha’s eventual win couldn’t help but feel positive after his performance. It turns out asking last year’s winner to play was a clever, intuitive stroke from the Mercury organisers. Skepta’s clearly not done yet, and still rightly commands a vast portion of the spotlight in the music business. Top marks for the Mercury-plated car he emerged from on stage, too.

It’s all part of the process

And what of this year’s triumphant Mercury winner? Introduced by Idris Elba, Sampha hadn’t prepared a speech, the notoriously shy piano man paying tribute to family, friends and all at his record label, Young Turks. And that’s all that was necessary, this artist isn’t about standing behind a mic and being flashy, unless he’s doing so sat behind his weapon of choice, that is. His second run through of (No One Knows Me) Like The Piano was as spine-tingling as the first, lent extra glitz and gravitas by the pop of the confetti cannons. As glittering silver descended on the room, Sampha brought a part of Process, the winning record, to life. His table duly lost it, and rightly so: this record has been years in the making. Years of personal and professional development, ups downs and just about everything in between. Not that it needed it – this was one of eight 2017 UK debuts to make the Top 200 albums of the first half of the year, after all – but Process now has the potential to reach an even wider audience. On this evidence, it’ll hit home wherever it’s heard.