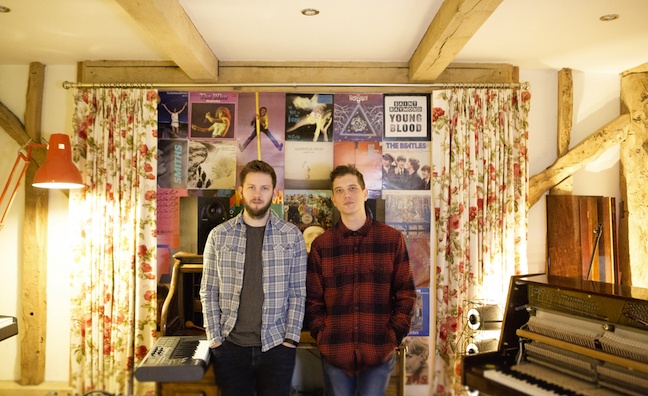 Producers Nick Atkinson and Edd Holloway have given an insight into working on Lewis Capaldi's BRIT-nominated debut LP Divinely Uninspired To A Hellish Extent.

The duo produced and co-wrote the Top 10 hit Grace and also worked on the single Hold Me While You Wait, as well as the album tracks Maybe, Don't Get Me Wrong, Hollywood and Headspace.

Speaking in the latest issue of Music Week, Atkinson (pictured right) and Holloway (left) revealed they first encountered Capaldi back in 2016, and were instantly impressed.

“We had a relationship with Lewis’ manager, Ryan Walter, through a previous artist and I guess we have a bit of a name for ourselves for developing acts," explained Atkinson. "Ryan called us up and said, ‘I’ve found this new kid. I think he’s great. Would you be up for writing with him and helping me work out what kind of artist he’s going to be?’

"As soon as we heard [Capaldi's] voice we wanted to get him in the studio as soon as possible.”

It was very easy to write with him, he has great ideas

The pair also co-wrote Let It Roll, which features on the extended edition of the double platinum-selling album (761,572 sales, OCC), with the singer, who this week announced a headline show at The O2 on October 2.

"He was very clear in what he wanted to write about and how he wanted things to sound," said Holloway. "It was very easy to write with him, he has great ideas.”

Capaldi, Music Week's Artist Of The Year 2019, was the only double award winner at Tuesday's BRITs, winning Best New Artist and Song Of The Year for his transatlantic No.1 Someone You Loved, and the 23-year-old's achievements have outstripped even Atkinson's lofty expectations.

“What you see is what you get with Lewis," he said. "We get asked a lot: ‘Is he as funny in real life?’ And yes, he absolutely is. What’s happened over the last few years is that his confidence has increased so he is more comfortable being the centre of attention.

"I don't think anybody – not even Ryan, who’s a master strategist – could have predicted it was going to go to the level it has. But we definitely thought, ‘This kid has got a shot’.”