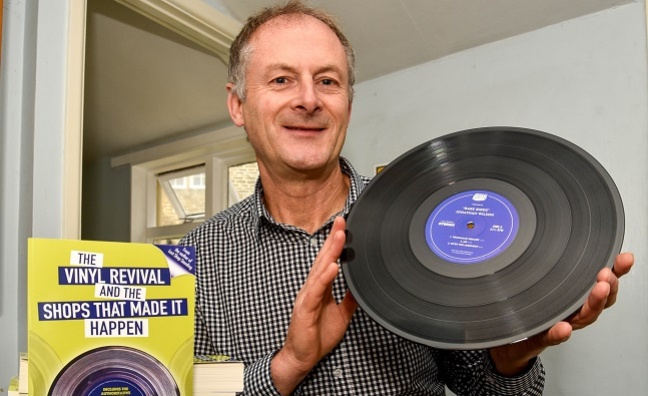 Indie retail has just enjoyed another boost with a host of Black Friday exclusives - it's an encouraging sign that the vinyl revival could be around for a while yet.

Proper Music co-founder Graham Jones has even written a book about it - The Vinyl Revival And The Shops That Made It Happen. It's a comprehensive and entertaining account of how the upturn in the format's fortunes has led to more than 100 record shops opening since 2009. Having spent 32 years travelling the UK selling music to independent shops, Jones has probably visited more British record stores than anyone else alive, which gives him a unique perspective on vinyl's changing fortunes. Here, he shares his record store experiences and offers some advice on how to succeed as an indie retailer...

What’s changed about indie retail in the last 30 years – and what’s stayed the same?

"What has changed is the quality of customer service. Many people will recall some of the dark and dingy record shops where you could feel intimidated. Shops similar to Championship Vinyl, as featured in the film High Fidelity, run by assistants who sneered if they did not approve of your taste. In the UK nobody summed this up better than an ex-school colleague of mine, the late, great Pete Burns who, before finding fame as lead singer of Dead Or Alive, terrified the music buyers of Liverpool from behind the counter at Probe Records. Pete would wear black contact lenses and with his outlandish fashion sense and sharp wit could be an intimidating figure. He became renowned for letting customers know if he did not approve of their musical taste. One customer recalled taking an album up to Pete only to be refused service as he was wearing jeans with turn-ups. These days, shops have so much competition that they offer top-class service to ensure they retain customers."

Why do you think more than 100 stores have opened since 2009? What was behind the vinyl explosion?

"It is down to Record Store Day. It is no coincidence that after years of declining vinyl sales and record shop closures, the year after RSD came to the UK the situation started to reverse with an increase in vinyl sales and record shop numbers. By offering releases you can only get in independent record shops, it enticed music fans back into these wonderful places. The event has gone from strength to strength with two record shops telling me they took more money on Record Store Day than in the whole of December. A lot of the credit must go to the Record Store Day organisers and the sterling work done by ERA in the UK."

What’s the outlook for indie retail – and how can the industry help?

"Now others are cashing in on their hard work. Over the past few years some record companies have started to offer exclusive vinyl albums that can only be purchased through their websites. It is beyond frustrating for a record shop when a customer asks for an item that is only available from the record company direct. Even worse, the shop must direct the consumer to a company website that is effectively harming their business. Not only does D2C hit record shop profits, it is a source of negative PR for them. Customers are leaving their shops disappointed and puzzled. The solution lies in companies still doing limited pressings, but if they are pressing 2,000 copies of something keep 50% for their D2C and offer 50% to retail. Everybody wins."

Is there a typical vinyl customer, or is it changing?

"When the vinyl revival started, it did seem a case of males over 40 purchasing all the vinyl they had disposed of when CDs came out. It soon became clear that the digital generation was both discovering and embracing the format. It is now all ages and sexes buying vinyl. My day job is at Proper Music and 10 years ago about 5% of our releases came out on vinyl. Now all key releases are vinyl, CD and digital."

HMV are the last music chain – what’s the outlook and do you have affection for it?

"I have great affection for HMV, having worked there for a few years in the early 80’s. The book covers the rise, and fall of HMV and how they have now embraced vinyl and are driving the sales of the format forward. I think Hilco have done a great job of restructuring the business as one of their first decisions was to re-introduce vinyl back in to the shops. They have made giant strides with their online business so the company is back on the up."

Is there any future for the CD?

"The CD is far from dead, with talk of a complete digital dominance being misplaced. Many observers predicted that the CD would go the way of the audio cassette, but I am pleased to say that although CD sales are slowing they show no sign of becoming a format consigned to our memories. It is still the biggest selling physical format by some way. I firmly believe that CDs will continue to be a resilient fixture in our musical landscape for a good few years to come."

What’s your advice to anyone looking to open a record shop?

"Do your research, as Phil and Kirsty say on Location Location, Location. It is important people looking to open shops are realistic. It is a lifestyle choice, you are unlikely to make much money and more likely to end up holidaying in Bognor rather than Barbados."

Finally, you mention record store films in the book - what's your favourite?

"I am a big fan of Jeanie Finlay’s film Sound It Out about a great record shop in Stockton, who I still sell to. I should give a big shout out to Last Shop Standing, the film of my first book. It featured Paul Weller, Johnny Marr and a host of record shops. I feel very humbled and honoured when I visit a new record shop and they tell me they were inspired to open after reading the book or watching the film. At the film’s premiere, Richard Churchyard from Raves From The Grave in Frome stood up and announced that he was considering closing, but after watching the film it has inspired him to continue. I am delighted to say that Raves From The Grave has gone from strength to strength."

Graham Jones is staging a series of record shop talks to accompany the publication of The Vinyl Revival and the Shops That Made it Happen - head to Facebook.com/vinylrevival1 for the latest dates, including Matters Of Vinyl Importance in London's Hoxton (November 29), Tailbird Records in Chesterfield (December 5) and Five Leaves Bookshop in Nottingham (December 6).