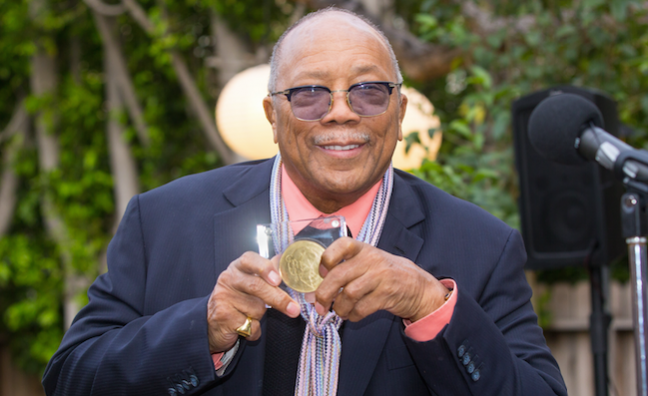 Quincy Jones has been presented with a Sacem medal in recognition of his outstanding contribution to music.

The Society of Authors, Composers and Publishers of Music honoured the legendary musician and producer – who has worked with Michael Jackson, Céline Dion, Frank Sinatra, Aretha Franklin and more – during a special ceremony in Los Angeles.

Jones first rose to prominence as a jazz arranger and conductor in the 1950s before becoming one of the most influential jazz musicians of the 20th century.

With 79 nominations and 27 wins, Jones is the most Grammy-nominated artist in history, and second in terms of all-time award wins.

He gained a scholarship at Seattle University and subsequently at the Berklee College of Music in Bosto, where he received an offer to tour with Lionel Hampton and embarked upon his professional career. In 1957, he settled in Paris, where he lived for seven years and studied classical composition with the French pianist Nadia Boulanger.

More recently, Jones has become well known for his charitable work. In 1985, he brought together a group of musicians including Lionel Richie and Michael Jackson to record We Are The World, raising tens of millions for humanitarian relief in Somalia.

Jean-Claude Petit, composer and chairman of Sacem’s board of directors, said: “The career and tremendous talent of Quincy Jones commands our respect and admiration. Composer, arranger, conductor, trumpeter and producer – he is the embodiment of a true artist and a living jazz legend and has made an indelible impact on music and cinema history. His artistic career is a beautiful symbol of freedom and an inspiration for all generations. We are delighted to present this award in Los Angeles, in the name of all the creators, publishers and members of Sacem.”