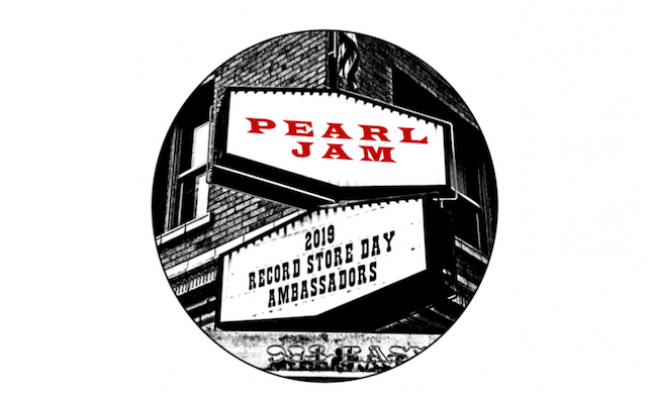 Today (February 12) Record Store Day has revealed Pearl Jam as its 2019 ambassador. The event is scheduled to return on Saturday, April 13, 2019. Last year’s ambassadors were Run The Jewels in the US and, in the UK, Record Store Day 2018 saw album sales increase by 33% year-on-year, according to Official Charts Company data for April 21.

Speaking about the news, RSD co-founder/organizer Carrie Colliton said: "I've worked in and around record stores for my entire adult life and feel like I've grown up with Pearl Jam because of it. My early, early advance copy of Ten came with me on a free-ranging trek through Europe at an impressionable age, some of my craziest and best midnight sales were for Pearl Jam albums, and any one of their songs makes me think of my favorite record store co-workers. This Ambassadorship is a natural fit-- a band that stays true to themselves and the people who love them, and a form of retail that does pretty much the same thing."

Pearl Jam guitarist Mike McCready added: “Pearl Jam is honoured to be Record Store Day’s Ambassador for 2019. Independent record stores are hugely important to me, and have been ever since I was 12 years-old. Before I even really knew what they were -- there was a certain feeling of 'this is a dream come true,' and it's a wonderland and there's so much to learn in here... and it's still that way.

He continued: “Support every independent record store that you can. They're really a good part of society. Know if you love music, this is the place to find it. And it helps people who work here and that's important, too. And it kind of takes an effort, you have to look for something that you want; you have to talk to people. I had to talk to people to figure out which Aerosmith record to get first or anything back in the day. It's a place to learn. It's a place to have fun. And it's a place to discover new music. Come out on Record Store Day, but also make it Record Store Year.”

You can find stores to celebrate in and a video from Pearl Jam at recordstoreday.com