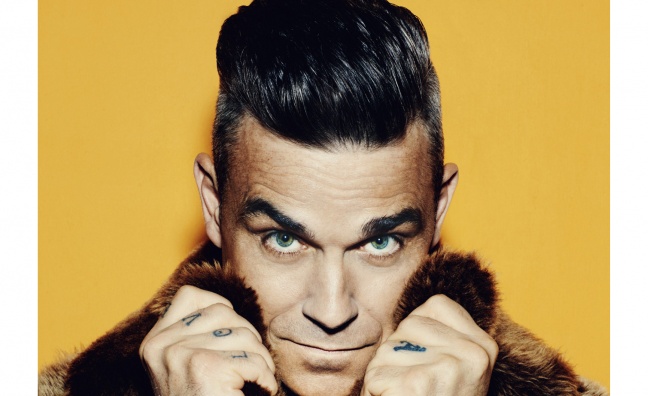 Robbie Williams received the BRIT Icon awards from his Take That bandmates during a special concert at East London's Troxy last night.

Gary Barlow, Mark Owen and Howard Donald joined Williams on stage for rapturously-received renditions of The Flood and Back For Good, returning for the encore to present the singer with the honour - his record 18th BRIT.

"Rob, whether you like it or not, you will always be a member of Take That, and I'm very proud," Donald told the star, while Owen added: "More than 25 years ago we were very fortunate to begin a journey with this gentleman. Sometimes we walked together, sometimes we watched from afar, but wow! What a journey it has been.

"He asked us to let him entertain us and man, has he delivered!"

Williams, whose 11th studio album The Heavy Entertainment Show is on course to top the charts on Friday, is only the third recipient of the Icon Award – the highest accolade given by the BRIT Awards – following in the footsteps of Elton John and David Bowie.

Last night's gig was filmed for a special 90-minute ITV show to be aired in December. The setlist was largely made up of Williams' biggest hits such as Let Me Entertain You, Kids, Millennium, Feel and Angels, along with a smattering of songs from his new LP. The 42-year-old was joined by his father, Pete Conway, on Better Man and played cover versions of New York, New York and Royals.