"'Rock is dead' is just a cool-sounding phrase for idiots": Jamie Lenman - The Music Week Interview 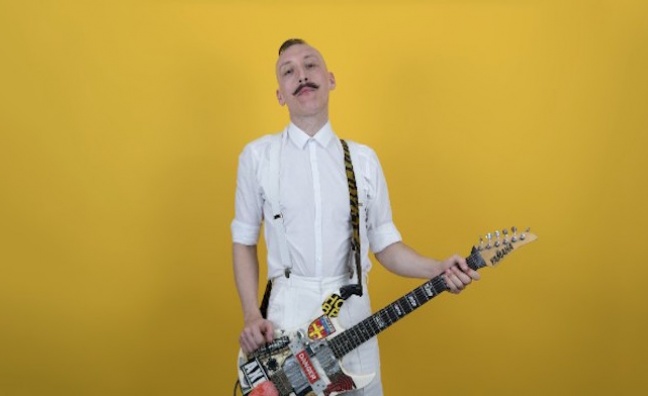 Today (October 27) Jamie Lenman - one of the unsung heroes of British rock music - releases his eagerly-anticipated second solo record Devolver via Big Scary Monsters. It packs no shortage of enormous riffs, but that is just for starters.
Throughout the years, Lenman's eccentric, always deeply personal lyrics have seen him become something of a grand orator for independent artists everywhere, his songs sometimes supercharged by his frustrations with the industry. Indeed, as part of defunct cult alt.rock trio Reuben, Lenman once recorded a song called Return Of The Jedi with choice lyrics including: “It's fifty grand to make a fucking video!” Devolver features all the same incisive wit listeners have become accustomed to, and much more besides.
Unlike his solo debut, 2013’s two-disc Muscle Memory (released on Xtra Mile), which split Lenman's talents into one bewilderingly heavy disc and one serene folk affair, this time he’s focussing on making one massive noise that draws from both. He’s also found a new home at indie Big Scary Monsters. Importantly, it's a happy one.
“We spoke to a lot of labels once we had a few tracks down and, as is often the way with these things, Big Scary Monsters were the ones that were still making a strong passionate case when the others had fallen away,” says Lenman. “We met with Kevin [Douch] and Dave [Owen] who run the thing and straight away they came out with all these ideas about how to approach the project that I’d never even considered – things no one else had suggested.”
Here we speak to Lenman about how he’s finding life as the UK’s heaviest singer-songwriter, what he's learned throughout his career, and why albums still matter...

What was the inspiration behind the title track and what made it work for the album as a whole?
“Oddly enough the album title ended up being a bit of a misnomer – after my last album [2013’s Muscle Memory] split the riffs and the melodies onto separate discs I viewed re-combining them as a bit of a backwards step, almost as if I was devolving to a previous state. What I came to realise through finishing it and then being able to look at it from the outside was that really, that previous record was a bit of a blind alley in terms of my musical development – I could never have seriously considered going forward with a half jazz half thrash double album every four years – so Devolver isn’t really a step backwards, it’s just continuing the journey after a bizarre sidestep. But by then we had the covers printed up.
“There is, however, a theme running through both the music and the lyrics of wanting to be simpler – I wanted it to be a more streamlined listen than anything I’d done before, and lots of the songs rely on repetition of a particular phrase or rhythm. There’s also a thread in the lyrics about accepting your own insignificance and divesting yourself of complicated and lofty ideas of self and value so on both levels, if you think in terms of ‘devolving’ meaning becoming simpler, the title still fits.”

Recent years have seen lots of talk about 'rock is dead' and the album being dead... As the heaviest singer songwriter out there, and a devout album artist, where do you stand on the matter?
“I don’t really know what ‘rock is dead’ means, I think it’s just a cool-sounding phrase for idiots, right? It doesn’t really mean anything. Anyone who claims that there is no new crop of rock bands playing at any one time just needs to look harder. The album though, is an interesting case. Speaking personally, I’m still wedded to the idea of a group of tracks that combine to create a larger piece of work that is more than the sum of its parts. You can hear it on Devolver, there are musical and lyrical themes that repeat and define themselves as it goes through, which you would lose if you listened to any track out of context. They all still work as individual songs of course, but you get more out of it when you hear it altogether. As someone born on the wrong side of the millennium with no kids I can’t really tell you how young folks consume music but I’m told it’s track by track, one song from this artist and the next from someone else, like a fruit salad. I think ‘shuffle’ has a lot to do with that – when we first got an ipod the wife and I used to stick it on shuffle in the car for long journeys and for a while it was exciting but after a while it started to feel a bit hollow and we dragged all the CDs back in.”

Drawing from your own past experiences, what do you think artists need most from a label in 2017?
“It used to be that the biggest thing an artist needed from a label was a big wad of cash, and then your whole team of managers and agents and press officers would officiate how it was spent with the label only stepping in now and then to put the mockers on your latest brilliant idea. Nowadays there’s less money about and labels have become much more involved in the process. They used to just bung thousands of pounds at people and say, ‘Come back in six months with an album,’ and then worry about it when they had it. I’m sure some of the bigger, older ones still do. What we get now is a hub from which to branch everything else out of – the label will organise all the mechanics of getting your record out there, onto the digital platforms, into the shops. Having run a small label myself I can tell you stories about fifty-page forms and registration protocols that would bend your bones, but people like BSM have been doing it for years so it’s second nature to them. They know what will sell, they can point you in the right direction. I wouldn’t have considered pressing up CD copies of this record and I was shocked when the label said they were being made up but apparently we’ve sold quite a few!”

Throughout the course of your career, you’ve written many songs about your own experiences in the music industry. What is the biggest lesson you learned from your time in Reuben?
“Don’t whine so much about the industry – you’ll never live it down! Nah, but seriously, I think the biggest lesson I took away from it was, ‘Don’t wait’. We spent years shopping around for the biggest record deal we could find when all the while we had an album of songs ready to go. By the time we made our first record the songs were years old and we’d been on the circuit for ages – we should have boshed out the first album with anyone who would press it and kept on the go. I see a lot of new bands sitting on gold material waiting for the right circumstances but if you do that for too long you lose the fire. Even if you just put it up on bandcamp for pay-what-you-want it’s so important for people to have something to connect with, and you can build your fanbase while your write the next one.”

When it came to going solo in 2013, what has been the biggest challenge?
“I think really it was finding where I sit in ‘the marketplace’, if you want to call it that. I wasn’t sure if I was going to be treated as a nostalgia act cos I’d been away so long, or would people have forgotten about me, would I be more like an unknown? In the end I think we’ve ended up in a sweet spot where people realise that I have a body of work behind me and, of course, most people know me from my old band, but I’m still sort of a new act, cos I’ve only been doing it under my own name for so long. It’s a weird dichotomy.
“It was also tough to work out where I fit in the UK scene, for a while at least. In the band days we were touring all the time with a familiar crop of bands but these days I don’t tour half as much so it’s harder to build up that sort of network – that’s the kind of thing labels are good for. They often have a stable of acts that are similar either in their sound or their ethos. I don’t think I really matched a lot of what was on Xtra Mile at the time my last album came out, and I hope I’m a better fit on Big Scary Monsters. Oddly enough, my management team also look after Black Peaks and Arcane Roots, who I happened to know personally before the fact, and I’d like to think I fit into a little group with those acts – we’re all doing our best to make complex, intelligent, if sometimes slightly grandiose music. I dig those guys all the way!"

Devolver's various album packages are interesting with the tiered system of 'goodies' starting with the small church show through to competitions for exclusives - how did you go about putting them together, what was the thought process?
“This was one of the big ideas that Big Scary Monsters brought to the table that really interested me and made me think they were probably the guys to do it. I don’t really like the models where you’ve got different payment tiers for extra content and whatnot, so to hear these guys say that that’s what they wanted to do, except that they were rewarding commitment instead of extra money, was very exciting to me. Pre-orders are super helpful to a label in BSM’s position the response we had was incredible right from the start.
“We all sat down over several sessions and tried to think of things we could offer people at no extra cost to them and, preferably, us. A little EP of album demos didn’t cost anything to make since we already had the content but it’s something that I’d love to have as a music fan and I was proud to put it out. Some people will be getting signed photos, which of course will have cost a little bit to get printed, but peanuts in the scheme of things and you can slip them in with the album or CD delivery for the same postage. I signed them all over the course of one evening and it was heavy going, but it’s that personal touch that people appreciate.”