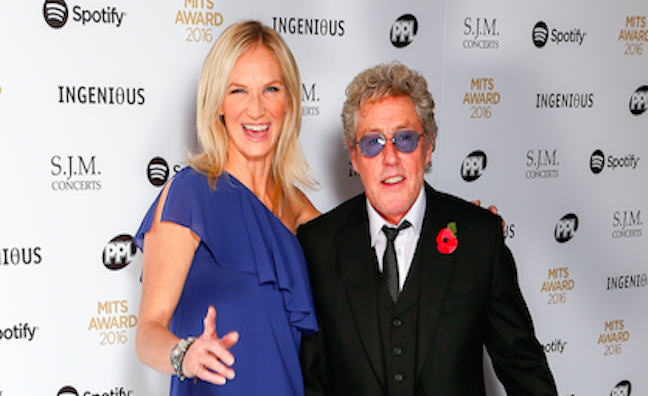 The Who legend Roger Daltrey hailed the work of Nordoff Robbins and Teenage Cancer Trust last night as he was honoured with the 2016 MITS Award, whilst also telling Music Week about his plans for a Tommy acoustic tour in 2017.

In an evening that saw Jo Wiley on hosting duties and featured live performances from the likes of former Keane frontman Tom Chaplin, UK country duo The Shires and Dr Feelgood guitarist Wilko Johnson, the event saw a star-studded list of industry guests turn out to pay tribute to 25th MITS Award winner.

“It feels like a really big honour because it’s our industry," Daltrey told Music Week. "It’s really special. Nordoff Robbins and charities like Teenage Cancer Trust are small charities and they do incredible work in the community We were one of the founders of Nordoff Robbins in the early ‘70s when a lady wrote to us and said, I’m going to do this charity to teach autistic children through music, will you support it? And we did, so I’m very happy to see it still here but equally I’m aware that they need events like this to make the public realise they are there. Otherwise people are left stranded. We need these kind of functions.”

He also discussed The Who’s 2017 acoustic tour of their iconic album Tommy.

“Well, we’re going to try it acoustically, but it might not work,” he said. “We left ourselves and out because on the poster it doesn't say acoustic. I’ve only committed to it verbally but we might change our fucking minds! If it needs electric we’ll put it in, but it’ll have a lot more light and shade in it than anything we’ve ever done.”

Daltrey was presented with his award by former Top Gear presenter and The Who super fan Jeremy Clarkson.

“People describe Roger Daltrey as one of the most influential rock vocalists of all time,” he said. “Bollocks. He is THE best rock vocalist of all time. They say don’t meet your heroes, but he is the most genuine geezer you could ever meet.”

On accepting his award, Daltrey paid tribute to his band mates in The Who, whilst also praising the great work of Nordoff Robbins and Teenage Cancer Trust.

“I got lucky,” he stated. “I found John Entwistle. I found Pete Townsend. I don’t know if it was lucky but I found Keith Moon!

“The Teenage Cancer Trust not only helps teenagers; it also helps parents. And it takes so much work to maintain where we are with Nordoff Robbins.

A host of special guests and former winners also hailed Daltrey and his charity work throughout his career. Speaking to Music Week former MITS winner Tom Jones said: “Nordoff Robbins is a great organisation and they do wonderful things. Anytime they call me, I’m there. Roger Daltrey deserves this not only because of the music he’s made but the charity work he does is tremendous.”

Meanwhile, host Wiley added: “It makes complete and utter sense to give the award to Roger Daltrey because it’s all about philanthropy and giving money to charities and there’s no one that does the level of work that Roger does, It feels right. Organisations need events like this more now than ever before.”

Wiley’s sentiments were echoed by former winner Harvey Goldsmith, who told us: “I couldn’t think of a better person to get the award not only for staying alive and being in one of the iconic bands of all time, but for all the other work Roger does for charity. Over the years, on shows I’ve done with The Who, we’ve raised so much money to help other people. Irrespective of all that, as an artist and a performer, it’s absolutely well deserved.”

David Munns OBE, chairman of the MITS Award committee, also said: “We are thrilled that as we celebrate 25 years of The Music Industry Trusts Award, we are honouring multigenerational cultural icon Roger Daltrey. The award recognises not only his unique music both as a solo performer and as part of The Who – but also his tireless philanthropic activities which mirror the goals of the MITS.

Since 1992, when the first MITS Award was presented, over £5.5 million has been raised for the charities the organisation works to sustain Nordoff Robbins and The BRIT Trust, which helps fund The BRIT School. Since 2015, more than 4,500 people accessed the services of Nordoff Robbins. The funds received through the MITS also underwrites its Masters in Music Therapy programmes, dedicated to training musicians who want to use their talent and ability to help others and become music therapists of the future.”

John Craig OBE, BRIT Trust chairman, said: “The BRIT Trust is both delighted and proud to be the joint-beneficiary, along with Nordoff-Robbins, of this year’s Music Industry Trusts Award evening, not least as it honours one of our music greats – Roger Daltrey. I am indebted to them all for their time and extraordinary commitment, which has helped to raise over £2.75 million for the Trust, in turn, contributing so hugely to the many charities we support, including, of course, the world-famous BRIT School, which does so much to develop exceptional British music and other creative talent.”