'She's an original': Daniel Glass on how the US fell for Jade Bird 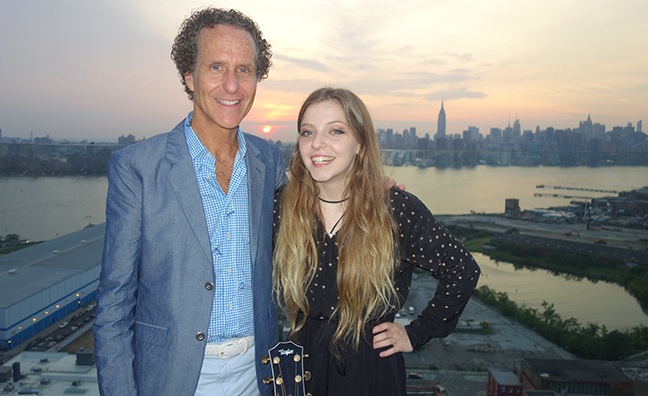 Jade Bird has cracked the Top 10 with her self-titled debut. The album opened at No.10 on sales of 5,628, according the Official Charts Company.

Glassnote Records also has big plans for the UK singer-songwriter in the US, following extensive touring, promotion and airplay success in North America. Here, Glassnote president/founder Daniel Glass opens up about his Grammy hopes for Bird…

How has the US reacted to Jade Bird?

“From the time [manager] Sam Eldridge introduced me to her music, I felt there was a kinship with America. It’s very strange when you meet artists that are not born in a country and know so much about the music. With Jade, you hear somebody who has such a deep knowledge, love and passion for Americana, blues, soul, roots music, folk and rock. You never know how it bleeds in. For most of your early life, music comes from you parents. But she had an interesting upbringing with parents who did not play that music for her. They were playing The Prodigy, Aphex Twin and rave music.”

What are your expectations for her as a debut artist?

“It’s funny her being on the same label as another band that came from the UK, who had a kick drum and a banjo and completely won over North America. We didn’t sign Jade because there was a kinship with Mumford & Sons, but it’s pretty extraordinary what is going on with her in America and in Canada. In Canada, she’s had a Top 10 alternative rock record with Uh Huh. She’s on five [radio] formats in the US. With the triple-A format there have been very few female artists that have had a number one triple-A record in the last five years. Lorde has done it, Adele’s done it and Jade’s done it.

“She works harder than anybody else. You look at Taylor Swift, Ed Sheeran, Khalid and Jade’s got that ambitious ethic – and it’s contagious. Her mother told me when I met her in Texas that Jade kind of threw her into these clubs. That’s where you get used to the heckling and jeering; if you can overcome that you can overcome anything. At 21, she’s got seven years of being used to performing. So she knows how to work a crowd, she knows exactly how to get her point across. She’s so wise beyond her years.”

“I remember when I took Chris Price [head of music] from Radio 1 to see her [at British Summer Time] in Hyde Park. It was the day Tom Petty was playing, Stevie Nicks and Jade was playing on a small stage. Chris came with me and he completely locked into her. I remember the first call I got from Mike Walsh [head of music] from Radio X and he said the same thing. They don’t play a lot of female rock at Radio X, but she has become part of the fabric of Radio X at this point and it’s great. I’m so proud of her and every day there’s something new with her, it’s really something.”

What do you think you can achieve with the album, especially in a streaming-led market like the US?

“I think it’s limitless. It’s a great time for the album. She’s won the best new international artist [Grulke Prize] at SXSW. She’s had all these incredible television and radio things. She’s doing the Newport Folk Festival, she’s played with Brandi Carlile and Hozier and she’s supporting Father John Misty. Spotify is putting Jade on a big billboard in Nashville for the week of release. Our distributor AWAL are doing a very, very good job with her on the streaming side particularly, there’s so much engagement with the Beats 1 people and Amazon. One of the turning points of her career was when Amazon had her cover a Johnny Cash song [I’ve Been Everywhere] as an Amazon Original. I remember being at a concert of hers and people yelling out ‘play it, play it’. Sirius XM has also been supporting Jade in the embryonic stages for the last two years. I have very high expectations for the album.”

How do you rate Jade as a songwriter?

“[The album] is a beautiful representation of the last two years. Simone Felice [producer] is very hot right now, he produced The Lumineers. I guess what I love is how singular it is in its authenticity. She’s an original. She wrote this album by herself, not many people are doing that. I know Sam Fender’s done it, but if you go to the top of the charts and you don’t see much of that. You saw it with the people she respects – Patti Smith, Alanis Morisette, Janis Joplin, the people that she gets compared to all the time. She will branch out, I’m sure, in the future and do collaborations but right now it’s very old school.

“I love the approach to the touring, to the hard work ethic and connecting - she has been to people’s homes. There was a time in the Midwest when there was a [radio] programmer who couldn’t come to a show, so she went to his house and played for his family – she just did a few songs in the living room. She was happy that this person was supporting her music, that’s what she does. When she’s done with her show every night, she gets a standing ovation, she goes out and she meets all the fans, hugs them, talks to them and that’s real.”

What are your hopes for Jade as a career artist?

“I think there’s a real career here. This feels like the seed and foundation of the Best New Artist nomination at the Grammys. I will put my name to that because I think she will get a nomination. I’m not saying that as hype – you look at the songwriting. I’m very proud when I look at all the things that we’ve done in two years with her. It’s very exciting to be part of and you feel it when you’re around her – she’s a bundle of energy. I could talk about Deezer, MTV, Vevo, Spotify, Beats 1, Amazon, Apple Music, everybody is very excited.”